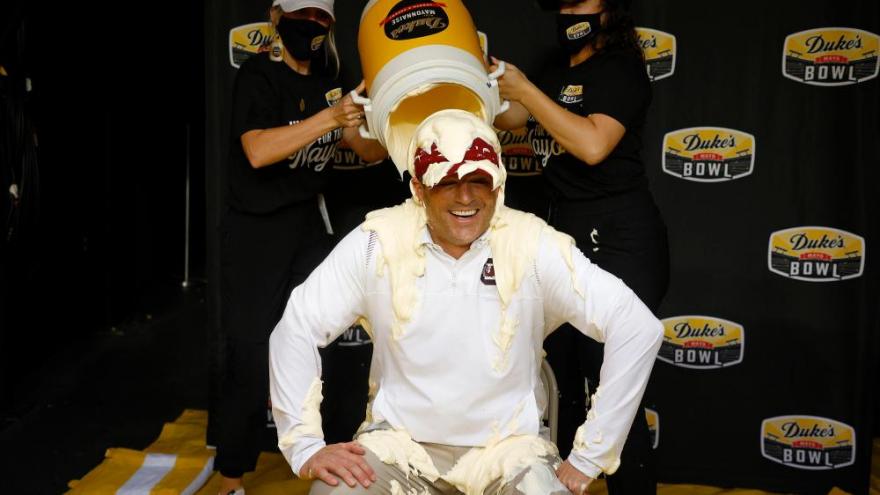 (CNN) -- For decades, college athletes have been dumping Gatorade on their coaches after a bowl win, but with more food-related sponsorships of bowl games, the contents of those celebrations have gotten a lot more interesting.

Some of the foods are dry, like French fries from the Famous Idaho Potato Bowl or crackers from the Cheez-It Bowl.

But others are not so appetizing.

After the Duke's Mayo Bowl, the company said it would make a $10,000 donation to charity if the winning team's head coach agreed to be doused in 4.5 gallons of the sponsor's product.

"The anticipation of the mayo bath, then I got hammered in the back of the head by it. I probably got a concussion from that," Beamer said in the post-game news conference. "On top of that, you got the mayo. It was awful, to be honest with you."

"I got mayo in my pockets. I'm going to be getting mayo off of me for months."

The substance of Beamer's winning bath wasn't ideal, but other coaches have had less messy victories.

Dabo Swinney, Clemson's head coach, was covered in Cheez-Its after their win over Iowa State on Wednesday in the bowl game of the same name. Swinney actually got covered in Gatorade as well, but soggy Cheez-Its are still easier to clean off than mayonnaise.

Wyoming head coach Craig Bohl got fries with that win over Kent State at the Famous Idaho Potato Bowl. It's a tradition to dump a cooler of crisp French fries over the winning coach (sadly, ketchup is not involved).

The winner of the Tony the Tiger Sun Bowl on Friday will have -- you guessed it -- Kellogg's Frosted Flakes dumped on their head. They're grrreat!

While nothing can really top mayo in terms of clean-up, San Diego State players drenched head coach Brady Hoke with a smoothie after their win at the Tropical Smoothie Cafe Frisco Bowl on December 21. Hoke thought it was Gatorade and then realized it didn't look -- or feel -- quite right. His players confirmed it was a nod to the bowl's sponsor.