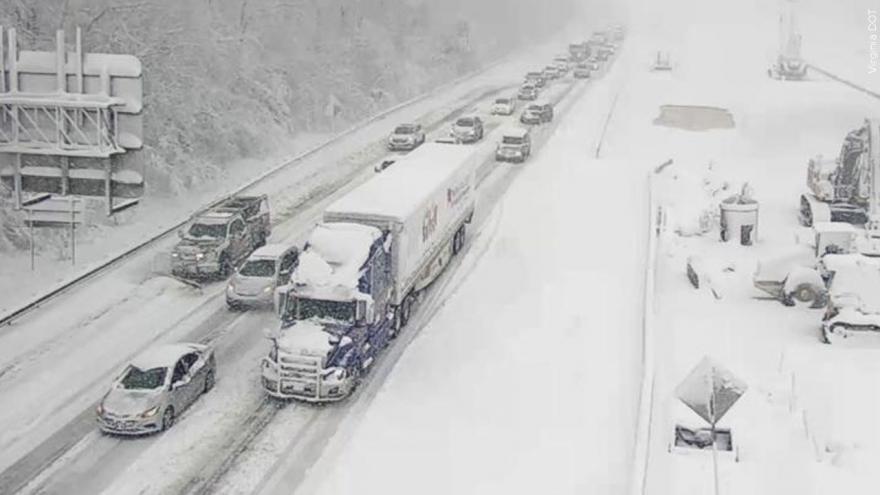 (CNN) -- Numerous vehicles still were stranded Tuesday afternoon on Interstate 95 in eastern Virginia -- some since Monday -- because of a severe winter storm that has sent authorities scrambling to clear paths to get them out.

Motorists were stuck on portions of a 50-mile stretch of I-95 in the Fredericksburg area, between Richmond and Washington, DC, partly because of disabled trucks blocking the way in snowy and icy conditions, the Virginia Department of Transportation said.

Drivers have described turning their engines on for a time to heat up, turning them off to conserve fuel, and sharing food and supplies with one another as crews try to clear trucks blocking the way after they were unable to continue in ice and snow.

By 11 a.m. Tuesday, Susan Phalen was able to finally start driving her car again on northbound I-95 after being stuck just south of Stafford for nearly 15 hours.

"I could have walked home faster than this, pretty much," Phalen told CNN by phone.

The interstate, a major East Coast artery, should be cleared of vehicles sometime Tuesday and in time for Wednesday morning's rush hour, said Marcie Parker, a district engineer with the state transportation department.

Virginia agencies have moved a "nice amount of traffic" off the interstate and the process is going more quickly than anticipated, she added.

Some vehicles that were stuck had as many as 4 inches of ice under them.

Live updates: Drivers trapped for hours on I-95

Among those stranded in the area: US Sen. Tim Kaine, who said he was still stuck in traffic at 8:30 a.m. Tuesday -- 19 hours after starting his drive.

The Virginia Democrat did not specify what road he was on at the time, but a second tweet indicated that at least part of the time -- for hours -- he was stopped on I-95. A family that had departed Florida was walking outside "in the middle of the night handing out oranges" to him and other trapped motorists, he wrote.

"I started my normal 2 hour drive to DC at 1pm yesterday. 19 hours later, I'm still not near the Capitol," Kaine tweeted, posting a picture from behind a windshield, showing three trucks ahead.

Motorists expressed frustration on social media as they sat in vehicles on I-95, unable to move and worried about below-freezing overnight and morning temperatures after a storm that dropped more than a foot of snow in the Fredericksburg area and left more than 400,000 customers in the Mid-Atlantic and Southeast without power.

Also trapped on I-95 overnight was Jennifer Travis, who with her husband and 12-year-old daughter were driving a rental car back to their Virginia home from Florida -- because their return flight had been canceled twice.

They were stuck on I-95 for hours early Tuesday -- with enough fuel for heat, but with no water or food. By 10 a.m., the family had been able to take an exit -- but now was driving a road that hadn't been plowed.

Many secondary roads in the region were blocked by downed trees or wintry conditions, authorities said, so even those able to get off I-95 have faced difficult travels.

"Trees are down, cars are just everywhere. ... It's treacherous," Travis told CNN by phone.

Aerial video from CNN affiliate WJLA showed numerous vehicles stationary on four lanes of I-95 in Caroline County, south of Fredericksburg. A few people, including children, were standing outside cars. One man was walking his dog on a leash.

Phalen -- who had been stuck north of Fredericksburg -- said she left her Fredericksburg home around 8 p.m. Monday for a trip to Alexandria -- which she'd expected to last just an hour.

She left Fredericksburg, she said, because her home lost power, and she also lost cell phone service there.

"Because I didn't have cell phone or internet connection at the house in Fredericksburg, I wasn't able to see this nightmare I was walking into until I was smack dab in the middle of it, and then it was too late," Phalen said.

She said she started with a full tank of gas, and was able to keep her car running for heat. Temperatures in the area dipped into the teens overnight.

"A lot of people ... in the vicinity where I am have been turning their cars off to save gas, and then they'll turn the car back on to heat it up a bit," she told CNN by phone.

Authorities closed that 50-mile stretch -- between exit 104 near Ruther Glen and exit 152 near Dumfries -- so workers could remove stopped trucks and treat the road for snow and icing, VDOT said.

In the jammed stretches, workers are trying to guide motorists to nearby interchanges, VDOT said.

Motorists with medical or life-threatening emergencies should call 911, VDOT said on Twitter. "Please provide the make & model of your vehicle, as well as the nearest mile marker. Please stay inside the vehicle," VDOT tweeted.

An emergency message was being sent to all stranded drivers on I-95 to put them in contact with support, Virginia Gov. Ralph Northam tweeted Tuesday.

The commonwealth also was working with communities to set up warming shelters, the tweet says.

"This is unprecedented, and we continue to steadily move stopped trucks to make progress toward restoring lanes," Parker, the VDOT engineer, said.

"As VDOT removes disabled vehicles, and plows/treats road to make it safe for passage as they are removed, (Virginia State Police) troopers will reach each driver," VDOT said.

The Fredericksburg area received at least 14 inches of snow from the storm, according to the National Weather Service in the Baltimore/Washington area.

"We know people have been stopped for extraordinary time periods leading up to these closure areas, but we are clearing trucks one by one to break through this blockage, and we will get to each driver and restore traffic flow," Kelly Hannon, spokesperson for the VDOT Fredericksburg District, told CNN early Tuesday.

"Crews continue to work intensely to tow vehicles that are stuck and blocking the interstate near mile markers 136 in Stafford County, and then plow and treat the interstate to prevent follow-on crashes," Hannon said.

A trucker, Jean-Carlo Gachet, was stuck for hours on I-95 near Dale City from about 1 a.m. Tuesday, he said.

He had food, water and a microwave, so he shared a heated breakfast with a man and his mother in a vehicle in front of him, he said. "Easily the longest traffic jam I've been in," said Gachet, who said he'd left Rhode Island around 5 p.m. Monday and was trying to get to Georgia.

CNN en Español correspondent Gustavo Valdés was among those stuck in traffic. He said when he stopped for gas around 6 p.m., his GPS said he was two hours from Washington. By 1 a.m. Tuesday, he still hadn't arrived.

Valdés said he exited the highway near Quantico, Virginia, but the side roads were also jammed. Route 1A, which runs parallel to I-95 in the area, was blocked by jackknifed trucks, which were preventing snowplows from getting through.

Valdés said he considered pulling to the side of the road to spend the night in his car because he couldn't find an available hotel room, but traffic had started moving again.

Some four-wheel-drive vehicles helped create new paths through the snow for other vehicles to follow, he said.

While traffic was snarled on the interstate, drivers were also urged to stay off local roadways as dozens of traffic signals were out of service due to power outages, officials said.

More than 270,000 customers were in the dark Tuesday afternoon from Georgia to Maryland, with nearly 235,000 outages reported in Virginia alone, according to PowerOutage.US.

It could take several weeks for all that snow to melt, CNN meteorologist Pedram Javaheri said, explaining that the white layer of snow cover reflects sunlight, essentially acting as a coolant that prevents the ground surface from warming enough to melt it.

On average, it takes about three days of temperatures above 50 degrees for about 2 to 4 inches of snow to melt, Javaheri said, and the Washington area is forecast to stay below that mark through at least the end of the week.

Three deaths were reported in Maryland after an SUV with four occupants collided with a snowplow, according to Shiera Goff, spokesperson for the Montgomery County Police Department. Two women and one man were pronounced dead at the scene, Goff said, and a fourth victim, a man, was taken to an area hospital where he is in critical condition.

The investigation into the cause of the collision is ongoing, Goff said.

The ground in the area was saturated by recent rainfall, Daniels told WSB. The weather service in Atlanta warned of possible wind gusts from 40 to 50 mph Monday morning.

And in Tennessee, a 7-year-old girl died early Monday when a tree fell on her home in the Knoxville area, the Blount County Sheriff's Office told CNN affiliate WVLT.

"There are trees down all over the county, particularly here in Townsend, because we are right at the foothills of the Great Smoky National Park," BCSO Public Information Officer Marian O'Briant told WVLT. "There are a lot of trees; it was kind of a wet heavy snow, so trees are still falling right now."

CNN has reached out to DeKalb County Fire Rescue and the Blount County Sheriff's Office.

In Atlantic City, 9.5 inches of snow was reported.

Southwestern New Jersey received between 1 and 4 inches of snow, while the southeastern part of the state got somewhere between 6 and 11 inches, Gov. Phil Murphy said.