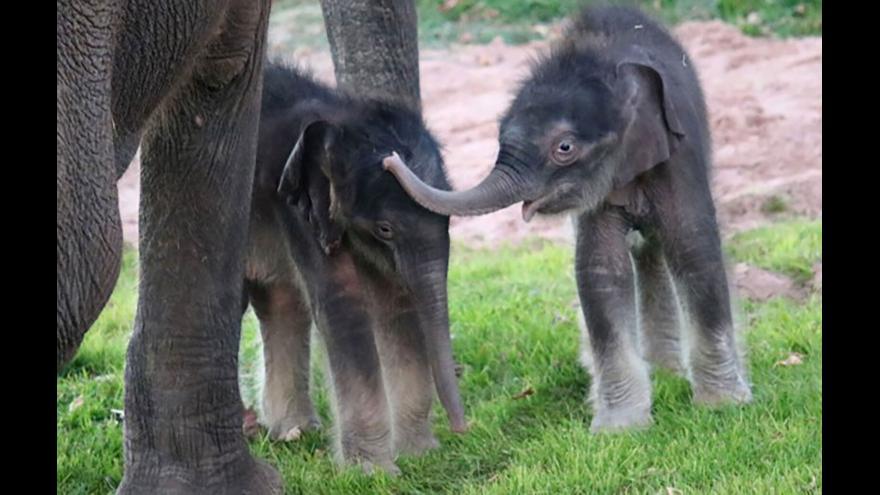 Zoo staff were shocked when mother Mali delivered a second calf 10 hours after delivering her first.

(CNN) -- The Rosamond Gifford Zoo in Syracuse, New York, has welcomed not one, but two new bundles of joy.

The Asian elephant twins were born on October 24 to parents Mali and Doc, according to a news release from the zoo.

The birth of twins was a shock for zoo staff, according to the release. Less than 1% of elephant births are twins -- and when twins are born, they rarely survive.

The first baby was born at around 2 a.m., weighing in at 220 pounds, says the release.

Then, 10 hours later, Mali delivered a second male calf, much to the surprise of staff monitoring. The second newborn was 237 pounds but was "noticeably weaker than the first."

So the "zoo's animal care team and veterinary staff sprang into action and were able to significantly improve the calf's condition," says the release.

The team hadn't predicted the birth of twins "due to the sheer improbability as well as the complexity of elephant ultrasounds," according to the release. But they were still prepared with a specialized milk replacer on hand to supplement the second calf's diet.

There has never been a recorded case of elephant twins surviving in the United States, says the zoo, making the birth a "historic moment" for the facility.

"This is truly a historic moment for the zoo and our community. I couldn't be prouder of our exceptional animal care team, the support of the veterinary staff and their tremendous dedication to Mali and the twins," said Onondaga County Executive Ryan J. McMahon in the release.

"The important research happening right here at the zoo will have a significant impact worldwide on behalf of this magnificent endangered species."

The miracle twins are Asian elephants, an endangered species found throughout south and Southeast Asia, according to the World Wildlife Fund. The species' population has declined largely due to habitat fragmentation, human-elephant conflict, and poaching.

As adults, the calves will likely weigh around 11,000 pounds and stand between 6 and 11 feet tall, per the World Wildlife Fund's size estimates.

In addition to helping boost the population of the endangered species, the zoo also hopes that the twins' birth will contribute to efforts to eliminate a fatal elephant disease, according to the release. Mali and Doc's previous two calves died from elephant endotheliotropic herpes virus, a strain of herpes that is the leading cause of death among young elephants, says the release.

Mali's placentas were sent to Baylor University for research in the hopes of developing a vaccine and treatment for the disease, says the zoo. And the twins will continue to be monitored and tested for the disease.

The birth of the twins brings the Rosamond Gifford Zoo's herd to a total of eight elephants. Visitors can check out the miracle babies -- alongside the rest of the herd -- at the zoo's Helga Beck Asian Elephant Preserve.