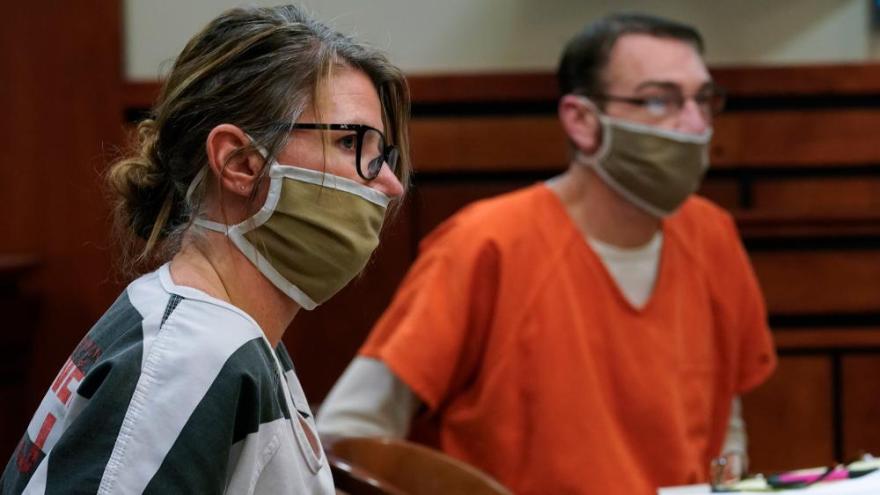 Michigan prosecutors say the parents of accused Oxford High School shooter Ethan Crumbley exposed him to years of "chaotic, toxic conflict," and that they left him in an unstable home often with little supervision, creating a pathway to violence. Jennifer and James Crumbley are seen here in court in February.

(CNN) -- Michigan prosecutors say the parents of accused Oxford High School shooter Ethan Crumbley exposed him to years of "chaotic, toxic conflict," and that they left him in an unstable home often with little supervision, creating a pathway to violence.

In a court filing Thursday, prosecutors argued that evidence of Jennifer and James Crumbley's personal problems, including an extramarital affair and substance abuse, should be allowed to be introduced at their trial. Attorneys for the couple have called the evidence "extraneous."

The parents were each charged with four counts of involuntary manslaughter after their teenage son allegedly shot and killed four students and injured seven other people at Oxford High School in November.

Prosecutors argued that Jennifer and James Crumbley played "a much larger role than just buying their son a gun," and that there were many things the parents could have done, other than simply locking up the gun, that could have prevented the tragedy. They also argued the parents had "every reason" to know their son was dangerous.

"What the evidence will actually show is that these defendants exposed their son to years of chaotic, toxic conflict, which is a well-known risk factor for entering the pathway to violence," the filing states. "The investigation paints a clear picture of parents who were not just in constant conflict, or who just exposed their son to conflict, but who actively inserted him into their conflict..."

Investigators have interviewed witnesses from across the country who interacted with the family as far back as when Ethan was in kindergarten, the filing reveals. Neighbors and others told investigators that the parents would consistently fight and drink to excess, often leaving Ethan unsupervised.

Evidence also shows the parents spent thousands of dollars on alcohol and care for horses and negligible amounts on medical care, the filing states. Ethan felt the financial stress and wrote about it in his journal, prosecutors said.

"My grades are falling, my parents hate each other, we have no money, I have zero help for my mental problems and it's causing me to shoot up the f**king school," one journal entry states.

Prosecutors also allege that when Ethan was six, his mother took him to stay the night with a person she was having an affair with and left him on the couch. When he was older, prosecutors said, Jennifer and James Crumbley would ask their son to investigate potential infidelities or check up on one of the parents, inserting him into their personal problems.

When Ethan went through stretches of poor sleep or insomnia, he "complained of seeing demons and asked for help" but his parents ignored him, prosecutors said.

"Their son was deteriorating before their eyes; he went through stretches of sleeping only a few hours per night -- staying up very late at night while defendants drank, argued and slept only a few feet away in a bedroom that shared a wall with the shooter's room," prosecutors said.

Witnesses also told investigators the parents were "routinely intoxicated" in front of Ethan and that marijuana was often used in the house, according to the filing, and that the parents spent nearly $4,000 at a nearby liquor store in 2021 alone.

Prosecutors emphasized in their filing that they are asking to admit the evidence of Ethan's exposure to infidelity, substance abuse, arguments and financial stress to show the stressful environment created by the Crumbley parents in the days and years before the deadly shooting.

CNN requested comment from attorneys for Jennifer and James Crumbley on the allegations made by prosecutors but did not receive an immediate response.