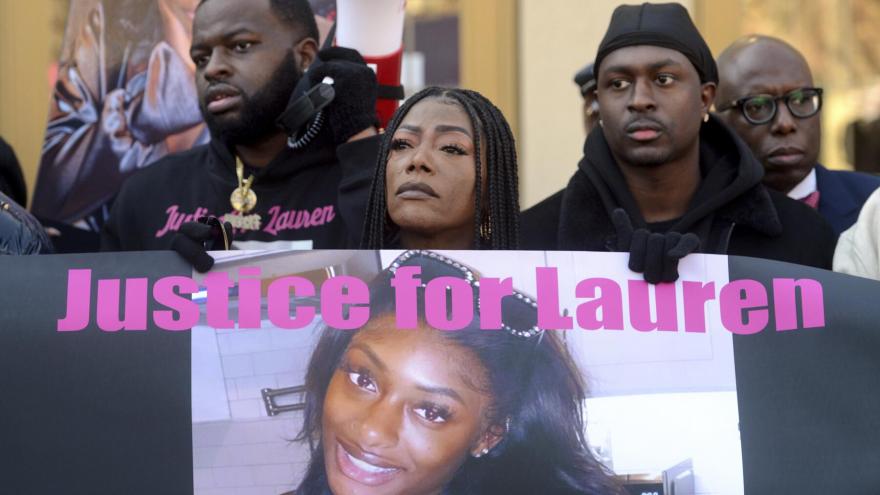 The family of a Connecticut woman, Lauren Smith-Fields who died last month, pictured here, in Bridgeport, Connecticut, on January 23, is accusing a local police department of violating their civil rights and mishandling the subsequent investigation.

(CNN) -- The death of Lauren Smith-Fields was caused by "acute intoxication due to the combined effects of fentanyl, promethazine, hydroxyzine, and alcohol" and was accidental, Connecticut's Office of the Chief Medical Examiner ruled Monday, multiple news outlets reported.

CNN has reached out to the medical examiner's office but has not received a response.

Smith-Fields, a 23-year-old Black woman, was found unresponsive in her home on December 12, 2021, by a Bridgeport Police Department officer, according to a police incident report obtained by CNN from the family's attorney.

The individual who called the police was a man Smith-Fields had met on the Bumble dating app and had been on a date with the night prior, according to police.

Before the reported ruling, her family said it plans to sue the city of Bridgeport, alleging in a notice of claim filed by their attorney that the Bridgeport Police Department didn't adequately collect physical evidence from Lauren's home and refused to consider the man she was on a date with as a person of interest. Members of her family also allege that the police department was "racially insensitive" to the family and violated their civil rights.

The notice of claim names Bridgeport Mayor Joseph Ganim and Acting Police Chief Rebeca Garcia, as well as detectives who were involved in the investigation.

CNN reached out to the Bridgeport Police Department for comment but has not received a response.

The police department did release a statement to CNN affiliate WTNH, saying it was awaiting the final report from the medical examiner's office on the cause and manner of death.

"The Bridgeport Police Department offers its sincerest condolences to the family and friends of Ms. Lauren Smith-Fields," the statement said, noting that Garcia would release a final report on receipt of outstanding reports, including the final findings from the medical examiner.
It added: "There are elements of misinformation being reposted by various sources but once again, we will be releasing a final comprehensive report at conclusion of this investigation. Anyone with information should contact the police."

"This family is not paranoid," attorney Darnell Crosland told CNN about the racial insensitivity the family feels. "The reason it feels that way is because as of late, Gabby Petito was missing and the type of manhunt that was out for her killer was insurmountably different than we see here."

"She was in college, and she had a family and friends that love her," said Smith-Fields' mother, Shantell Fields, to CNN affiliate News 12 Connecticut. "No one is going to discard Lauren Smith-Fields, my daughter, (like) she's rubbish."

What happened to Lauren Smith-Fields?

Early on the morning of December 12, Bridgeport police received a report about an unresponsive woman at a home, according to a police incident report. Upon arrival, an officer found Smith-Fields laying on her back on the floor, with dried blood in and around her right nostril, according to police.

The officer also found a "frantic man," who identified himself as someone who had only known Lauren Smith-Fields for three days and met her on the dating app Bumble, according to police.

The man told police that he had arrived at Smith-Fields' residence the night before after she invited him over. They were drinking shots of tequila when she became ill and went to the bathroom to vomit, the man told police, according to the report. After her return, they continued drinking tequila with mixers, played games, ate food, and started watching a movie, according to police.

At some point during the night, Smith-Fields' brother stopped by her home to collect clothes from her, according to Crosland. When she came back, she went to the bathroom for approximately 15 minutes, the man who met Smith-Fields on Bumble reported to police.

When Smith-Fields fell asleep on the couch, the man carried her to bed and fell asleep next to her, the report states. When he woke up very early that morning to use the restroom, he says Smith-Fields was snoring, but when he woke up a couple of hours later, he says he saw her lying on her right side with blood coming out of her nostril onto the bed, prompting him to call police, the report states.

Medics who arrived on the scene pronounced her dead and said she had been dead for at least an hour or more, the report states.

Officers collected several items as evidence, including more than $1,300 in cash, her passport, a credit card and her cell phone, according to the police report.

The police did not notify Smith-Fields' family of her death, Crosland says, and instead the family found out a day later after visiting her home and finding a note from the landlord on Smith-Fields' apartment door.

"The mom had been calling, because Christmas dinner was supposed to be at Lauren's house that year," Crosland told CNN. "They drove over there, found a note on door from the landlord that said if anyone is looking for Lauren, call me. The police never tried to reach out to the family, they just took her body out of the home."

Crosland described the detectives assigned to the case as dismissive and called them "rude." He said the detectives treated the family badly when they called and met with police seeking answers about Smith-Fields' death.

Family says they will fight for justice

In a statement, Mayor Ganim acknowledged the "unanswered questions and concerns" surrounding Smith-Fields' death and shared that he's referred the matter to the Office of Internal Affairs to conduct a full investigation.

"There is no tolerance for anything less than respect and sensitivity for family members and their loss," said Ganim in the statement. "I share concerns echoed by many about the amount of time and manner a family is informed of a loss. Death notifications should be done in a manner that illustrates dignity for the deceased and respect and compassion for the family."

Ganim also said he'll work with the chief of police to amend the department's policy surrounding notifying family members of deaths and that he had reached out to the State Medical Examiner's Office to expedite this matter.

When the family inspected Smith-Fields home after the learning of her death, Crosland alleges they found a used condom, a sedative pill, the blood-stained sheet, an overturned plate of food, and bottles of alcohol.

"You'd definitely want to get the sheet, condom, you'd want to take pictures of the overturned plate," said Crosland. "After we forced them to collect it on December 29, I called the state forensic lab and the woman who answered said the police department has not made a submission."

Crosland also says that a detective called the Smith-Fields' Bumble date "a nice man" to her brother and also told him not to "jump to any inclusions."

The dating app Bumble confirmed to CNN that they are in touch with law enforcement. In a statement shared with CNN, Bumble said it was deeply saddened by the news of Smith-Fields' passing and had reached out to the family to offer support.

"The physical and emotional safety of our community is of paramount importance," the statement read. "We investigate member complaints and take swift, decisive action against any members who do not meet our standards. We stand ready to provide appropriate assistance and information as requested by law enforcement.

Crosland and Smith-Fields' family are prepared to fight for justice, they said.

"We will not stop until we get justice for Lauren and the thousands of black girls that go missing in this country every year," said Crosland in a statement shared with CNN. "We owe them equal rights and justice regardless of race and we wouldn't stop fighting until we get it."