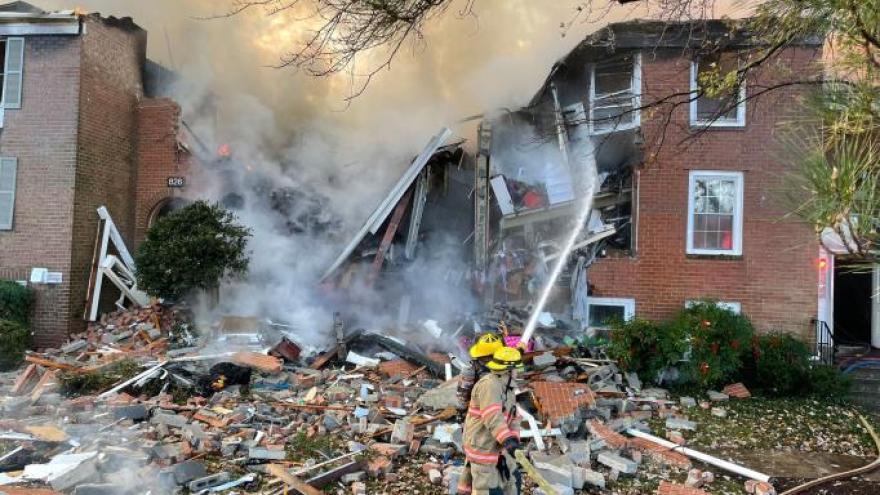 Police are launching a criminal investigation into the explosion.

(CNN) -- Authorities in Gaithersburg, Maryland are launching a criminal investigation into a condo explosion that caused a building to partially collapse on Wednesday, leaving one person dead and 14 injured, fire officials announced.

At least 100 fire and rescue personnel responded to the scene after reports of an explosion and fire around 8:40 a.m. Wednesday, kicking off a massive multi-day search-and-rescue operation, Montgomery County Fire and Rescue Service officials said. Efforts to locate residents and potential victims unaccounted for will continue Friday.

As crews continue to scour the site for possible victims and work to remove debris, police are pursuing an investigation into the cause of the blast.

"We are looking into the possibility of this as a criminal, intentional act," Jones said Thursday, declining to provide further details. "We are lacking a lot of other evidence."

Fire crews were battling a "gas-fed fire" in the building's basement Wednesday as utility workers attempted to shut off natural gas to the facility, Goldstein said Wednesday. Officials have yet to announce an official cause of the fire and explosion.

At least ten people, including 4 children, were transported to the hospital with injuries ranging from mild to critical, according to Goldstein. At least two people were treated at the scene and declined to go to the hospital, he said.

Two condo buildings, each with six units, were impacted by the fire, the fire chief said previously. Two other buildings were evacuated Wednesday as authorities attempted to account for the residents of nine affected apartments.

In a statement Wednesday, Washington Gas said the company was supporting the response to the incident and "responding to assist the fire department on the scene."