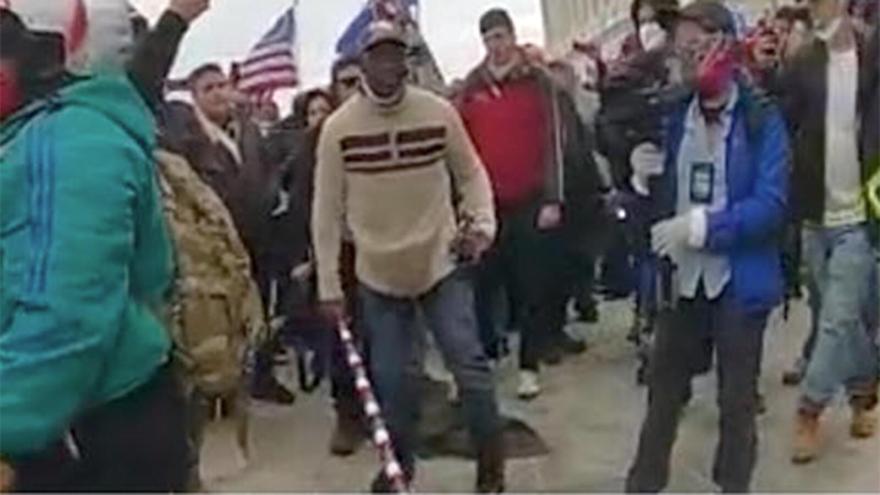 A frame taken from the body worn camera of a of MPD Officer shows Mark Ponder armed with a long pole with red, white, and blue stripes.

(CNN) -- A federal judge sentenced a man who assaulted law enforcement officers with poles during the January 6, 2021, attack on the US Capitol -- and continued to scuffle with officers even after being briefly detained that day -- to more than five years in prison on Tuesday.

Mark Ponder pleaded guilty in April to assaulting law enforcement and has been held without bond since March 2021. The 56-year-old Washington, DC, resident also was sentenced to three years of supervised release.

Ponder remained on Capitol grounds for nearly three hours on January 6. After being detained for attacking officers released earlier in the day amid the chaos, Ponder engaged in a second violent assault in one of the most brutal attacks between officers and rioters that day.

He later told federal agents that police were "part of the problem" during the riot.

Sgt. Aquilino Gonell, one of the US Capitol Police officers that Ponder attacked, testified Tuesday at Ponder's sentencing committee.

Gonell asked DC District Judge Tanya Chutkan: "Please do not fall for his plea because that day he didn't care about me" and described Ponder's explanation that he got caught up in the moment as "BS."

Gonell, who has emerged as a prominent voice speaking publicly about the attack and its effects on law enforcement, told the court he was injured by other rioters and blocked attacks from Ponder with his riot shield during the assault.

Before handing down her sentence, Chutkan said that Ponder "wasn't defending himself or anyone else; he was trying to injure those officers."

Chutkan's sentence went several months beyond the Justice Department's request of 60 months and, during Tuesday's hearing, the judge said she even considered going above the maximum guideline recommendation of 71 months.

Ponder said he had been pepper sprayed and got caught up in "the tensions of that day" and asked the judge for mercy.

According to court filings, Ponder struck Gonell's riot shield with a thin pole while moving with a crowd on the West Plaza. The force of the blow cracked the riot shield and broke the pole -- but Ponder found another pole wrapped in red, white and blue stripes and continued to swing at police, according to court documents.

As he was being escorted by police away from the violence in the Upper West Terrace, Ponder encouraged his fellow rioters, saying they "have a right to fight ... that is what the Second Amendment was built on," according to Ponder's plea agreement.

Following his release -- after officers were unable to transport Ponder from the Capitol -- and despite orders to stay away from the building, surveillance and police body-worn camera footage shows he remained on Capitol grounds until that evening and continued to attack officers in the tunnel of the Lower West Terrace.

Ponder, who was arrested two months after the attack, told federal agents at the time: "The way this country is going, you [officers] gonna have to pick a side."