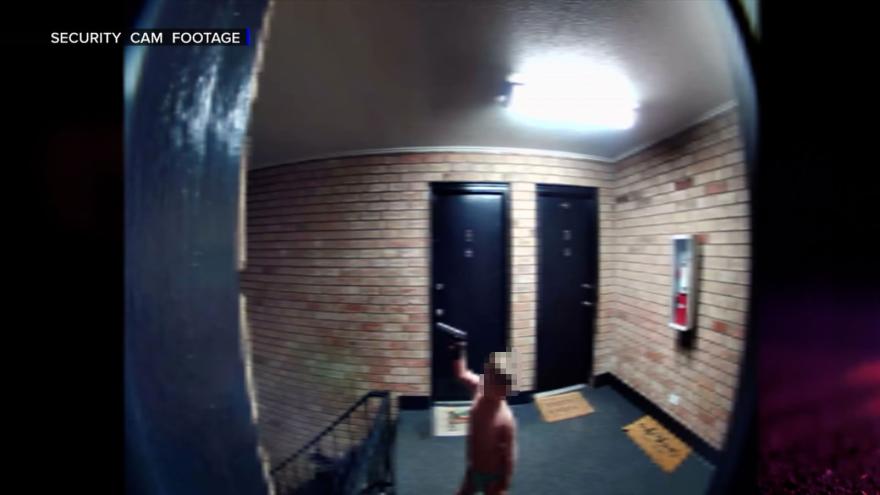 On Patrol: Live and REELZ

(CNN) -- The purported father of a toddler seen in the entryway of an Indiana apartment complex waving a handgun said he was ill and unaware the boy had left the residence.

Shane Osborne "explained that he had been ill all day and did not know (the toddler had) left the apartment," an officer said in a probable cause affidavit.

The toddler is identified in the affidavit as "K.O."

Osborne let the officers perform a "cursory look throughout" the apartment, according to the affidavit, but police did not find a firearm, "in plain view." Officers left the apartment but were met by a concerned neighbor with security video of the toddler with the gun, the affidavit said.

The security video was aired by the Reelz series "On Patrol: Live," during the TV show's live broadcast on Saturday, according to a news release. The show identified Osborne as the boy's father.

"The video showed K.O. walking around the upstairs landing of the Beech Grove apartment with a silver and black handgun," the affidavit said. Officers returned to the apartment where Osborne was staying and questioned him again.

Osborne told police he did not have a gun, "but indicated that a relative may have left one somewhere."

Officer Rainerio Comia asked K.O., "where he put his 'pew pew,'" after another apartment search seemed to turn up empty, according to the affidavit.

That's when K.O. led officers to a roll-top desk where officers found the gun, the affidavit said.

Osborne told officers the gun was not his and that it belonged to a cousin "who sometimes left the weapon (there) when he felt mentally unstable," the affidavit said.

"He did not know the weapon was in the apartment at this time, nor that K.O. knew where it was," the affidavit said. "He believed K.O. was inside the apartment, playing and watching television. However, he stated that he must have been very asleep, because he did not notice K.O. leave the apartment."

The boy was left in Osborne's care because his primary caregiver was sicker than he was, the affidavit said. Osborne was eventually handcuffed and taken out of the apartment, CNN previously reported.

He faces charges related to neglect of a dependent and dangerous control of a firearm, Indiana court documents show, and is scheduled for his first court appearance Thursday afternoon.