Man accused of killing Kristin Smart in 1996 hid her body with his father's help, prosecutors allege as trial begins 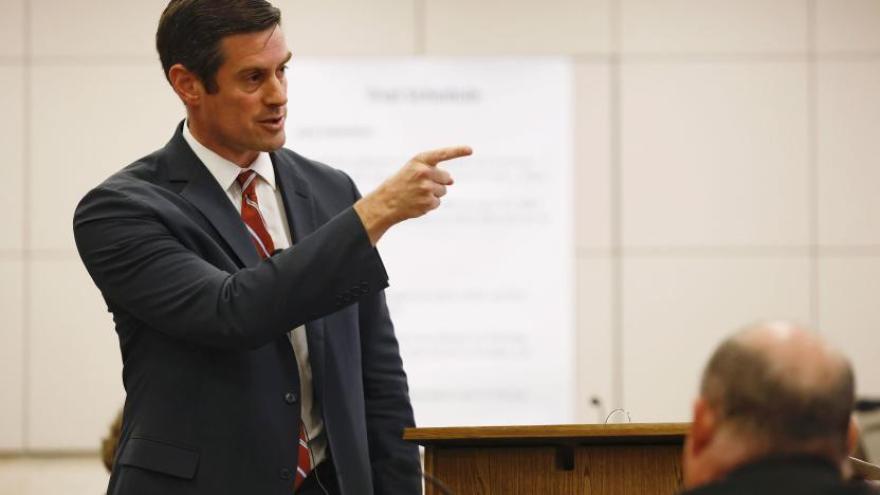 Prosecutor Christopher Peuvrelle delivers his opening statement in the murder trial of Paul and Ruben Flores.

(CNN) -- Opening statements began Monday in the trial of a California father and son charged in connection with the death of college student Kristin Smart in 1996.

Prosecutors alleged in court Monday that blood was found in the soil outside a home belonging to Ruben Flores, who is accused of helping his son hide Smart's body, according to CNN affiliate KSBY.

Paul Flores, 45, is charged with first-degree murder for allegedly killing Smart in his dorm room while he and the victim were students at Cal Poly San Luis Obispo. His father is charged as an accessory in the murder. Prosecutors allege he helped his son move Smart's body to his home in Arroyo Grande, where prosecutors believe it was buried for a time under the deck. Both have pleaded not guilty.

Prosecutors previously alleged that Paul Flores killed Smart while raping or attempting to rape her.

The two men were arrested in April 2021, nearly 25 years after Smart's disappearance. She was declared dead in 2002, though her body has not been found.

The father and son are being tried at the same time, but have separate juries, KSBY reported. Audio and video recordings of the trial are not allowed, and Monterey County Superior Court Judge Jennifer O'Keefe is only permitting still photography of the proceedings.

The trial is being held in Monterey County after a judge who was overseeing the case in San Luis Obispo County ruled widespread publicity and significant attention on the case would likely prevent the Flores' from receiving a fair trial in San Luis Obispo, the affiliate said.

Peuvrelle told jurors Monday that several searches of Ruben Flores' home turned up soil samples that tested positive for human blood. He also presented photos of Paul Flores' dorm room and said multiple cadaver dogs alerted to the smell of human remains while searching the building, according to KSBY.

The affiliate also reported that audio of a phone call between Paul Flores and his mother, which was obtained through a wiretapping warrant, was also played in court.

In one audio clip played by Peuvrelle, Paul Flores' mother Susan Flores refers to the "Your Own Backyard" podcast, which examined Smart's disappearance and raised public interest in the case. In the clip, she tells her son, "I need you start to listening to the podcast ... I need you to poke holes in it where you can," according to KSBY.

In his opening statement, Paul Flores' attorney Robert Sanger said the audio clip was part of a longer conversation and does not admit wrongdoing, according to KSBY. The attorney also reportedly criticized the prosecution's lack of eyewitnesses and physical or forensic evidence and portrayed Smart as a young woman who was known to disappear with friends.