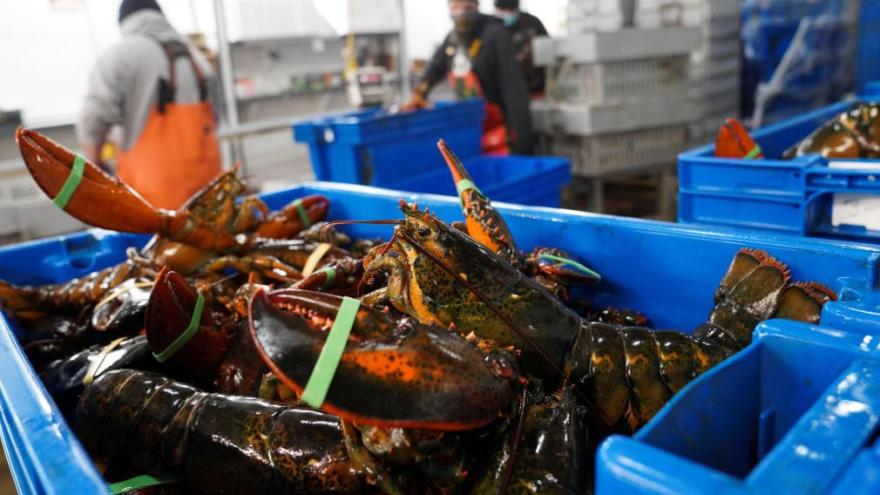 Workers sort lobsters by size at The Lobster Co. in Arundel, Maine. A prominent advocacy group has called on consumers to avoid lobster because of major threats to the critically endangered North Atlantic right whale, but Maine politicians are not happy about the guidance.

(CNN) -- A prominent advocacy group has called on consumers to avoid lobster because of major threats to the critically endangered North Atlantic right whale, but Maine politicians are not happy about the guidance.

The California-based Monterey Bay Aquarium's Seafood Watch has published recommendations on sustainable seafood since the 1990s, ranking different seafood products as "red," "yellow," or "green." On September 6, Seafood Watch added a number of new seafood species to the "red" ranking, which they urge consumers to avoid.

"Entanglement in fishing gear is the leading cause of serious injury and death to North Atlantic right whales. As a result, bycatch management is rated ineffective for all pot and set gillnet fisheries operating within the North Atlantic right whale's range because current management measures do not go far enough to mitigate entanglement risks and promote recovery of the species."

Politicians in Maine, where the lobster industry is crucial, are calling on the organization to reverse what they called an "irresponsible decision."

In a news release, Maine governor Janet Mills, senators Angus King and Susan Collins, and representatives Chellie Pingree and Jared Golden urged Seafood Watch to change its decision. They argued the organization has not presented enough evidence of the dangers caused by lobster fisheries.

"The recent decision by Monterey Bay Aquarium's Seafood Watch to 'Red List' Maine lobster with scant evidence of impacts on right whales is a reckless piece of activism that will inflict substantial negative real-world consequences on an important and iconic industry in Maine," wrote the Maine delegation in the release. "In a courtroom, we require evidence before convicting someone of a crime; but you are seeking to sentence Maine's lobstermen with conjecture, assumptions, and guesswork instead of hard facts."

"If anything, the publicly available facts rebut this aggressive action that will impact the livelihoods of thousands of people in Maine, and make it clear that you should immediately reverse the irresponsible designation."

The politicians argued there is not enough evidence to conclude lines used to fish lobsters are specifically hurting North Atlantic right whales. They claim there has not been a confirmed right whale entanglement in Maine lobster gear since 2004. And lobster fishers have already taken steps to reduce the risk vertical lines pose to whales, they said.

Most entanglements cannot be linked to a specific industry or even location, so it is impossible to say whether entanglements came from Maine lobster fisheries, Seafood Watch acknowledged.

However, they insist current measures do not "go far enough to mitigate entanglement risks and promote recovery of the North Atlantic right whale," the organization wrote in a series of "questions and answers" published Friday.

Ultimately, the organization hopes reform of lobster fisheries will "quickly reduce cumulative impacts to the [North Atlantic right whale] and allow the population to recover," they added.