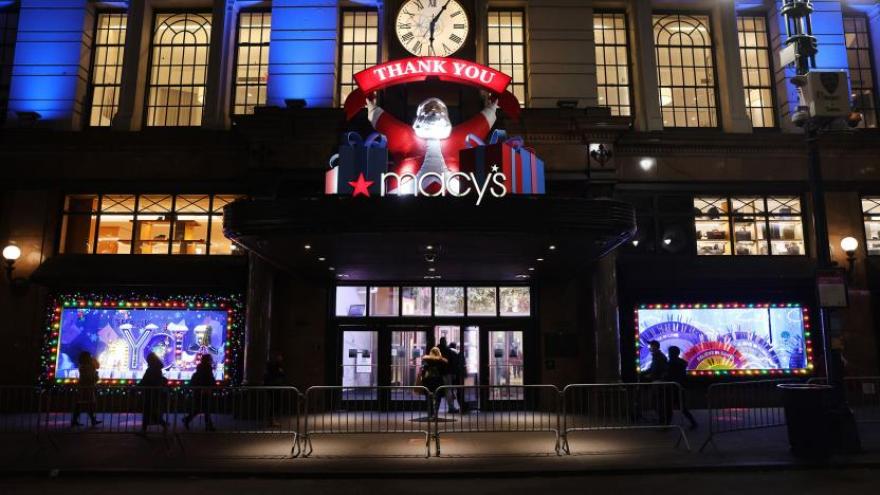 People look at the newly revealed Macy's Herald Square holiday windows on November 19, 2020 in New York City. This year's windows look to give thanks to the city and those who worked on the frontlines of the pandemic, including first responders and essential workers.

(CNN) -- Nothing, not even a pandemic, can dampen the holiday spirit in New York City -- but we wouldn't be here without the essential workers who remain on the frontlines of the battle against the coronavirus.

The animated and interactive displays, which were unveiled on Thursday, are "a form of a thank you letter to first responders, essential workers, marchers for equality, and New Yorkers who showed their grit, good humor, and hopeful spirit" during the year, according to a news release from Macy's.

More than 100 "Santa helpers" -- including artists, animators, electricians and lighting experts -- designed and put together the six window displays, according to the news release. It took about two weeks to complete them, Macy's said.

"Macy's is part of the fabric of New York City. Our famed holiday windows this year reflect the power, grit and spirit of our resilient community," Scott Devine, Macy's vice president of visual merchandising, said in a statement.

"We want to thank first responders, essential workers and everyday New Yorkers who came together this year to support each other and the city we call home. With a dose of whimsy and a dash of sparkle, we hope our love letter serves to enchant, delight and honor our fellow New Yorkers as we celebrate the holidays."

There are six windows in all, each featuring a unique setting including one that showed a New York City scene with neon lights and "thank you" in 16 different languages. During peak hours, more than 10,000 people pass by the windows, the press release said.

Macy's is known for its holiday window displays which first appeared in 1874 during the holiday season in New York. New Yorkers and visitors can admire the bright window displays on the Broadway side of Herald Square until January 1, 2021.