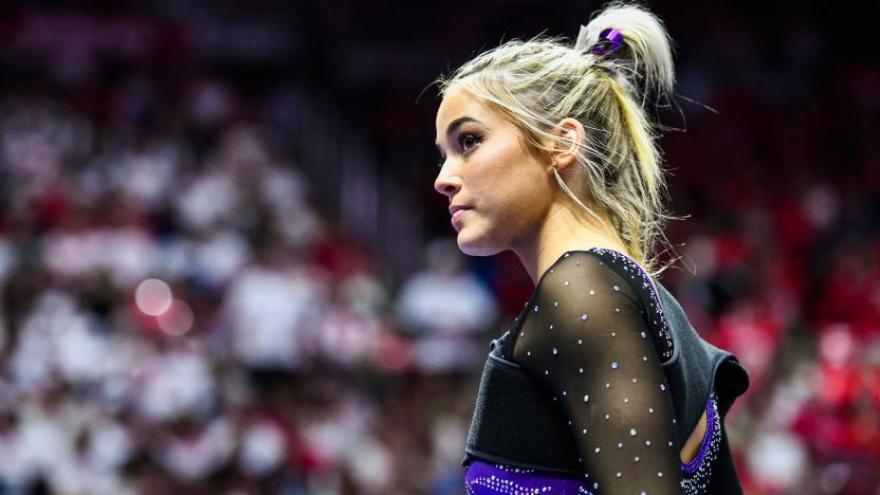 (CNN) -- The head coach of Louisiana State University's gymnastics team said there will be added security when it travels to an away meet after an incident last week where fans of Tigers gymnast and TikTok influencer Olivia Dunne disrupted a meet against the University of Utah earlier this week in Salt Lake City.

Jay Clark on Wednesday went as far as describing the situation in Salt Lake City on January 6 as "mob-like."

"The safety of our student athletes is paramount to me as a father and as a coach of these amazing young women," he told reporters Wednesday when explaining the reason for the changes.

Videos posted to social media show the fans, mostly young men, waving posters and a live-size cutout of Dunne and chanting "We want Livvy! Give us Livvy!" as other athletes were trying to compete. Dunne did not participate in the meet due to injury.

"They made themselves very much a part of the environment. They were drawing attention away from what was going on on the floor," Clark said.

"So it was a little bit disconcerting, I think, the level of intensity that went with it. There was a mob-like kind of feel out there, and that was disconcerting to me as someone who takes the responsibility for the welfare of our kids."

Dunne tweeted Sunday, "I will always appreciate and love the support from you guys, but if you come to a meet, I want to ask you to please be respectful of the other gymnasts and the gymnastics community as we are just doing our job."

After the meet, ESPN analyst Sam Peszek shared video on social media showing dozens of screaming male fans waiting outside the arena for Dunne to emerge. Peszek described the scene as "so scary and disturbing and cringey."

Clark said he found the pitch of the scene outside the arena "inappropriate."

"When we go on the road, we will have security detail with us now, and we will be working to create a perimeter around where we load and disembark on the bus," Clark announced.

The 20-year-old Dunne has amassed 6.7 million followers on TikTok and is the top-earning female collegiate athlete in name, image and likeness, or NIL, sponsorships, according to Sports Illustrated.

Clark said he feels the scene in Utah was "an unintended consequence and byproduct of the society that we're in now."

"It's not about Olivia or NIL or social media, it's just I guess sort of the sense of entitlement that some people feel they can behave a certain way and that what we saw go on out there was a behavior that I didn't think was appropriate," Clark said. "That's not normal autograph seeking behavior, you know, engagement with an athlete with fans and that kind of stuff. There was a, there was a mob sense to that scene that that was very disconcerting to me and that's what I hope is not going to become the norm."

The LSU team competes on the road at the University of Kentucky Friday night ahead of its home opener Monday against University of Oklahoma.