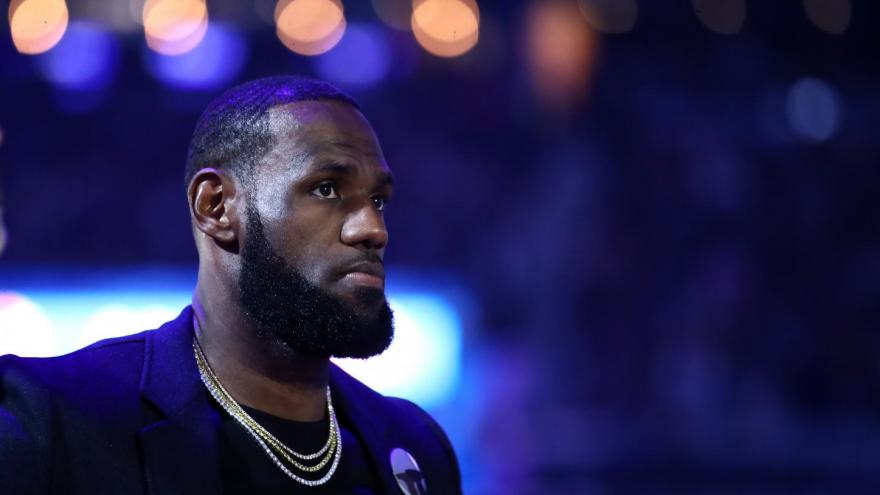 An organization started by NBA superstar LeBron James and other Black athletes and entertainers announced that it will help Floridians with prior felony convictions register to vote in the November election.

(CNN) -- An organization started by NBA superstar LeBron James and other Black athletes and entertainers announced Friday that it will help Floridians with prior felony convictions register to vote in the November election.

More Than A Vote said it will donate $100,000 to the Florida Rights Restoration Coalition's fund for Floridians struggling to pay off outstanding fees and fines associated with their felony convictions before they register to vote.

"This is a fight about their constitutional right to vote being denied," James, the NBA champion and former Cleveland Cavaliers and Miami Heat star who now plays for the Los Angeles Lakers, tweeted Friday.

"We believe that your right to vote shouldn't depend upon whether or not you can pay to exercise it," Miami Heat forward Udonis Haslem, who is also a member of More Than A Vote, said in a press release Friday. "Which is why More Than A Vote is proud to partner with the Florida Rights Restoration Coalition to ensure that formerly incarcerated American citizens -- many of them Black and brown -- are able to pay their outstanding fines and fees and register to vote in the 2020 election and beyond."

"FRRC is thrilled to partner with More Than A Vote to help Florida's returning citizens pay off their fines and fees, complete their sentence and move forward with their lives," Desmond Meade said.

The announcement comes as both the NBA and WNBA have been in Florida preparing for the restart and start of their respective seasons. On Saturday prior to the first game of the season, the WNBA dedicated its 2020 season to Breonna Taylor and the Say Her Name movement.

More Than A Vote, along with Magnolia Pictures and Participant, is also hosting an online screening of "John Lewis: Good Trouble," a documentary about the life of the late US congressman and civil rights icon. Proceeds from the screening will go directly to the Florida Rights Restoration Coalition's "fines and fees program."

More than one million Floridians with prior felony convictions had their voting rights restored with a constitutional amendment passed in November 2018.

Amendment 4, which allowed convicted felons who complete "all terms of sentence" the right to vote, passed with nearly 65% of the vote, exceeding the 60% threshold required.

Florida Rights Restoration Coalition was one of the authors of Amendment 4 and pushed for its inclusion on the ballot.

After Amendment 4 went into effect in January 2019, the GOP-led Florida Legislature passed, and Republican Gov. Ron DeSantis signed, a bill that clarified "all terms of sentence" to include legal financial obligations such as fines, fees and restitution.

The law was quickly challenged in court by voting rights advocates who argued that the law amounted to a "poll tax."

A US district judge ruled in May that Floridians with prior felony convictions can't be barred from voting because they still owe court fines or fees that they are unable to pay. A federal appeals court in Atlanta this month blocked the judge's order, keeping the law in place. A hearing in the case is set for August 18 -- the same day as Florida's primary elections.

In the wake of the death of George Floyd, James and other athletes formed More Than A Vote in June, aiming to protect Black voting rights. NBA stars Trae Young and Draymond Green, WNBA star Skylar Diggins-Smith and former NBA star and current commentator Jalen Rose are a few of the other athletes involved with More Than A Vote.

More Than A Vote has also partnered with Fair Fight, an organization launched by Georgia Democrat Stacey Abrams that advocates for fair elections.