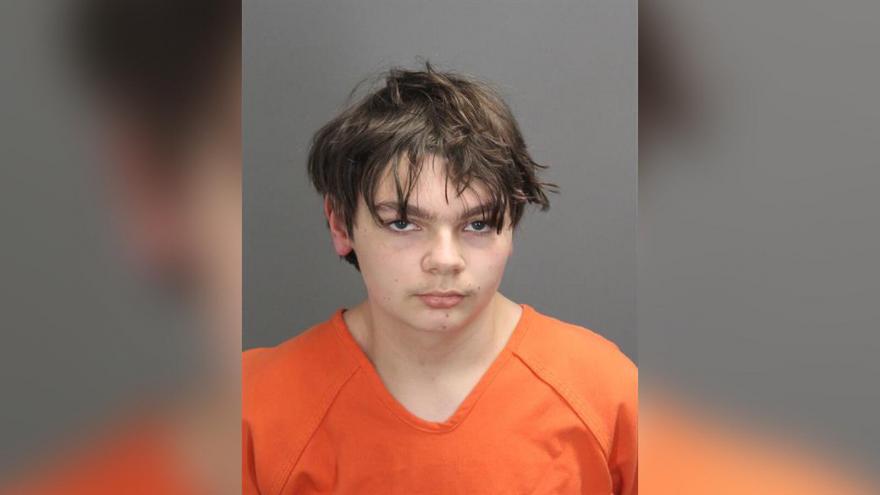 A lawsuit filed on behalf of two survivors of the deadly Oxford High School shooting in Michigan accuses the school district and a number of its employees of not doing enough to prevent the attack that left four students dead, despite multiple red flags.

(CNN) -- A lawsuit filed on behalf of two survivors of the deadly Oxford High School shooting in Michigan accuses the school district and a number of its employees of not doing enough to prevent the attack that left four students dead, despite multiple red flags.

The lawsuit alleges Ethan Crumbley, who has been charged in connection with the shooting, brought live ammunition to school, brought a severed bird head to school and posted threats on social media prior to the shooting.

"The horror of November 30, 2021 was entirely preventable," the lawsuit said.

The complaint was initially filed in a US District Court in Michigan in December by the family of two sisters who survived the shooting, and was amended January 7. Oxford Community School District, its superintendent, the Oxford High School's principal and dean of students, as well as unnamed counselors, teachers and a staffer are defendants.

One of the sisters was shot in the neck during the attack, the lawsuit says, and the other was narrowly missed.

The lawsuit seeks more than $100 million for each of the girls, citing the need for medical and emotional treatment.

In a statement to CNN on Wednesday, Tim Mullins, an attorney representing the Oxford Community School District, said the district and all its personnel have fully cooperated with the investigation into the shooting.

"In pursuing the investigation, prosecutors have asked and the school district certainly agrees, and we have made the commitment not to do or say anything that would confuse, interfere with or in effect obstruct their pursuit of justice on behalf of the victims of these criminal acts," Mullins said. "The school district is honoring that commitment."

Crumbley, 15, has been charged as an adult in the shooting. He faces one count of terrorism causing death, four counts of first-degree murder, seven counts of assault with intent to murder and 12 counts of possession of a firearm during the commission of a felony. A not-guilty plea was entered on his behalf.

Ethan Crumbley's parents, Jennifer and James Crumbley, were arrested days after the shooting and charged with four counts each of involuntary manslaughter. They have pleaded not guilty. Prosecutors said in a filing in December that the teen's parents were "in a better position than anyone else in the world to prevent this tragedy, but they failed to do so."

Attorneys for Ethan, Jennifer and James Crumbley have not responded to CNN's request for comment.

Ethan Crumbley displayed alarming behavior on November 11 when he brought a severed bird head to school in a mason jar filled with yellow liquid, the lawsuit said. He left the jar on a toilet paper dispenser in the boys' bathroom, it said.

Students reported the incident to the Oxford High School principal and other school administration officials, the lawsuit said.

The next day, according to the lawsuit, the high school sent an email to parents saying: "Please know that we have reviewed every concern shared with us and investigated all information provided...[w]e want our parents and students to know that there has been no threat to our building nor our students."

On November 16, multiple parents expressed concerns with the principal about threats Crumbley made on social media, according to the complaint. The principal and Oxford superintendent reviewed Crumbley's posts, which threatened Oxford High students, the complaint said. Crumbley's Instagram and other social media accounts were set to public, meaning anyone could view them, it said.

The complaint alleges that one parent told school officials, "I know it's been investigated but my kid doesn't feel safe at school."

That same day, the principal emailed parents saying: "I know I'm being redundant here, but there is absolutely no threat at the HS...large assumptions were made from a few social media posts, then the assumptions evolved into exaggerated rumors."

After the email exchanges, the superintendent warned students -- over loudspeaker -- "to stop spreading information over social media and stop relying on information on social media," the lawsuit states.

"At all times relevant (the superintendent's) actions, by advising each and every student ... that there was no credible threat, demonstrated conduct so reckless as to demonstrate a substantial lack of concern for whether an injury (wound) result," the lawsuit said.

Ethan Crumbley "had total access to this weapon," and the parents "didn't secure (the gun) and they allowed him free access to it," McDonald said during the parents' December 4 arraignment.

On November 29 -- the day before the shooting -- the lawsuit states Crumbley "brought live ammunition to Oxford High School and openly displayed the same while in the classroom." That same day, a teacher saw Crumbley "searching for ammunition on his cell phone during class," the lawsuit states. The teacher reported the incident to a counselor.

School officials contacted the parents via phone and email, but they did not respond. Officials "released Ethan Crumbley from school without discipline and without investigating his inappropriate internet search," the lawsuit alleges.

Later, Jennifer Crumbley sent her son a text message saying, "LOL I'm not mad at you. You have to learn not to get caught," according to McDonald.

That night, the lawsuit alleges, Crumbley changed his Twitter bio to read, "Now I am become Death, the destroyer of worlds. See you tomorrow Oxford."

On the day of the shooting, another teacher found a drawing on Crumbley's desk that essentially depicted a shooting, McDonald said. It "alarmed her to the point that she took a picture of it on her cell phone," the prosecutor said.

The picture led school officials to hold a meeting with him and his parents, the lawsuit said.

When the parents were called that day, Jennifer Crumbley asked if James Crumbley could just call in, and she was told by the school they had called him but only heard "dead air," Prosecutor Marc Keast said in court last week at a bond reduction hearing.

Both parents ultimately showed up at the school.

After the school discussed their concern over the teen's drawings, the parents said neither of them could take him home, Keast told the court. Jennifer Crumbley then said, "Are we done here?" which is when the school said they had 48 hours to call a therapist, according to Keast's account.

The parents resisted the idea of taking their son out of school, McDonald said in December, and he was allowed to return to the classroom.

The shooting happened several hours later, but prosecutors say neither parent went home to check on the location of the gun.