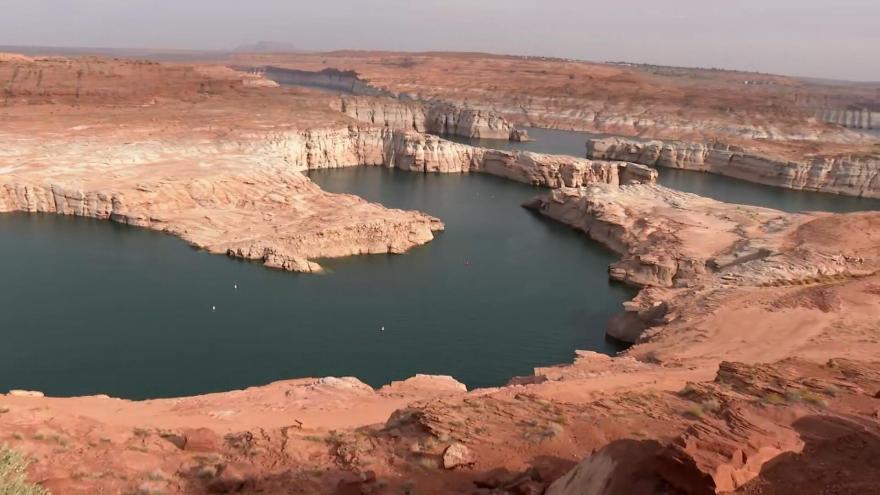 The federal government announced May 3 that it is taking unprecedented, emergency steps to help boost water levels at Lake Powell.

The measures are intended to buy the surrounding communities more time to plan for the very real possibility the reservoir, the country's second-largest, will soon run out of water and the ability to produce hydropower amid the West's climate change-driven megadrought.

The first step is releasing more water from upstream on the Colorado River this year. The second is water will be held back in Lake Powell itself, instead of being sent to downstream states.

Without the emergency steps, the bureau estimated there was about a 25% chance the Glen Canyon Dam could have stopped producing hydropower by January. The dam generates power for as many as 5.8 million homes and businesses in seven states.

The agency said in a statement Tuesday's decision was intended to protect "hydropower generation, the facility's key infrastructure, and the water supply for the city of Page, Arizona, and the LeChee Chapter of the Navajo Nation."

The emergency actions will buy the federal government 12 months as it considers longer-term measures.

"We have never taken this step before, but the potential risk on the horizon demands prompt action," Assistant Secretary of Water and Science, Tanya Trujillo told reporters. "We need to work together to stabilize the reservoir before we face a larger crisis."

Lake Powell has dropped around 100 feet in the last three years as the West has been besieged by drought. As the water level has fallen, Glen Canyon Dam has lost about 16% of its capacity to generate power.

"We're knocking on the door of judgment day," Hill previously told CNN. "Judgment day being when we don't have any water to give anybody."

The decisions made for Lake Powell also affect its downstream neighbor, Lake Mead, which is the largest reservoir in the country.

Water cuts for those who rely on Lake Mead began in January, and Tuesday's decision could lead to further restrictions.

Lake Mead's water level is now low enough to expose one of the reservoir's original, 1971 water intake valves for the first time. The valve can no longer draw water, according to the Southern Nevada Water Authority, the agency responsible for managing water resources for 2.2 million people in southern Nevada, including Las Vegas.

Officials over the weekend made another disturbing discovery brought on by Lake Mead's plummeting water level: a body in a barrel police say is a likely homicide victim from the 1980s.

"The lake has drained dramatically over the last 15 years," said Las Vegas Metropolitan Police Homicide Lieutenant Ray Spencer. "It's likely that we will find additional bodies that have been dumped in Lake Mead" as the water level drops more.