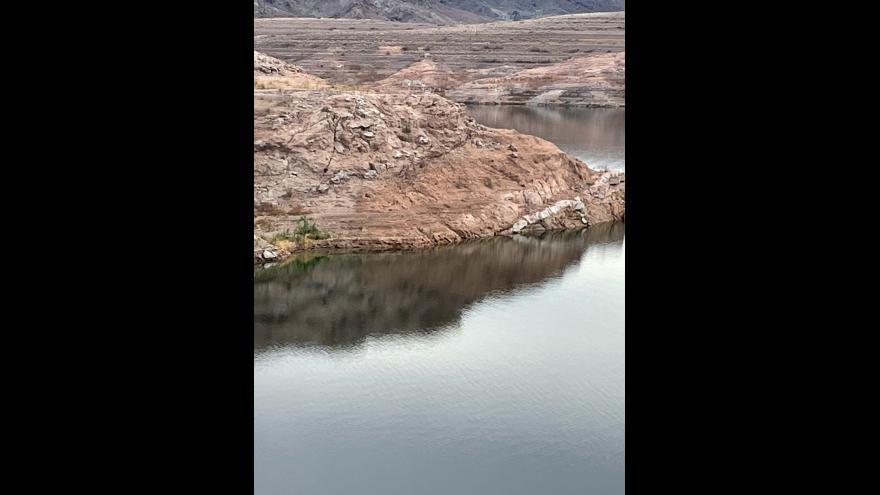 The record-low water levels are exposing sedimentary rocks that haven't been seen since the 1930s when the Hoover Dam was built and Lake Mead filled. Among these rocks, researchers with the University of Nevada in Las Vegas found ash deposits from volcanoes in Idaho, Wyoming and California.

"We knew that these ash units existed, but we were surprised to find so many as the Lake Mead water level lowered," said Eugene Smith, an emeritus professor of geology at UNLV and co-author of the study.

The West's climate change-fueled drought and overuse of the Colorado River's water has pushed Lake Mead levels to unprecedented lows. As of September, the lake's water level was just 1,045 feet above sea level, or around 27% of full capacity.

Scientists are taking advantage of the low levels to study sediment that hasn't been exposed in nearly a century.

Smith's research team found white to gray colored volcanic ash weaving through the formerly submerged rocks. They took samples back to their lab to pinpoint the source of the ash, but it wasn't from a single eruption.

They found evidence of several volcanic blasts millions of years ago from places like the Snake River Plain-Yellowstone area -- a tract of inactive volcanoes that stretches across Idaho along the Snake River and into what is now Yellowstone National Park -- and eastern California. They also found ash from eruptions only 32,000 years ago -- which is not so long ago in the geological time scale.

Jake Lowenstern, a research geologist with the US Geological Survey who is not involved with the study, told CNN that studying volcanic eruptions of the past can help paint a picture of future risk.

The latest discovery in Lake Mead may be one of the "better" collections of volcanic ash from that period of time, Lowenstern said, and it will "be important in allowing us to reconstruct the geologic history of the region, and to understand the frequency of large volcanic eruptions and their impact on the Southwest."

Ash from even moderately explosive volcanic eruptions can travel hundreds of miles, blanketing areas as far away as several meters with heavy material. Recent eruptions have showed a couple of millimeters of damp ash can disrupt electricity transmission. And when inhaled, the tiny but sharp grains in the ash pose a significant health risk.

"These ashfall events can disrupt transportation and supply networks, close airports, and potentially be a health hazard," Smith said. "It's important for local governments to develop plans to deal with this sort of event, like they have for earthquakes and flooding."

Smith said their latest analysis could help society prepare for future volcanic events, even if from far away volcanoes -- as well as "present and future climate change."

"Studying the past is the key to understanding the future," Smith said. "By understanding past volcanic events, we can better understand how a future event may affect a large metropolitan area. We can also develop plans to deal with a volcanic eruption when one occurs in the future."