King Charles III addresses his nation, and the world, for the first time 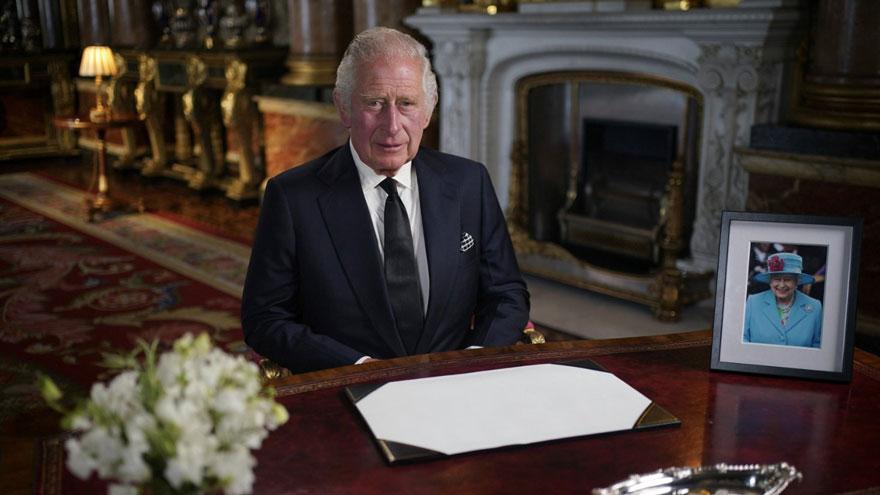 (CNN) -- King Charles III delivered his first public address as the new British monarch, just a day after ascending to the throne following the death of his mother Queen Elizabeth II.

The King has given numerous public speeches during his time as the heir apparent, but the address on Friday was perhaps the most important of his life so far -- and he began with a tribute to his mother.

Wearing a black suit and a black tie, Charles said Queen Elizabeth "made sacrifices for duty, dedication and devotion."

"In her life of service, we saw that abiding love of tradition together with that fearless embrace of progress which makes us great as nations," the King said.

The speech was pre-recorded at Buckingham Palace earlier on Friday. Sitting behind a desk, with a picture of his mother displayed prominently to his left, Charles promised he would continue in her footsteps and serve his people.

"As the Queen herself did with such unswerving devotion, I too now solemnly

pledge myself, throughout the remaining time God grants me, to uphold the Constitutional principles at the heart of our nation," the King said.

"And wherever you may live in the United Kingdom, or in the Realms and territories across the world, and whatever may be your background or beliefs, I shall endeavor to serve you with loyalty, respect and love, as I have throughout my life," he added.

Charles also took time to speak about his family, saying he will rely on them as he takes up the role he spent more than 70 years preparing for.

"I count on the loving help of my darling wife, Camilla," Charles said, adding that "in recognition of her own loyal public service since our marriage 17 years ago, she becomes my Queen Consort."

The King also made a significant announcement during his first address, naming his son William to be the Prince of Wales, the title he held before the Queen's death on Thursday.

"With Catherine beside him, our new Prince and Princess of Wales will, I know, continue to inspire and lead our national conversations, helping to bring the marginal to the center ground where vital help can be given," Charles said.

He also said he wanted to "express my love for Harry and Meghan as they continue to build their lives overseas."

The fact that the new King took time to mention his younger and his wife will be seen as significant, given their decision to step away from their royal roles in 2020.
He ended on a personal note, with another message to the late Queen. "To my darling mama, as you begin your last great journey, I want simply to say this: Thank you."

"Thank you for your love and devotion to our family and to the family of nations you have served so diligently all these years."