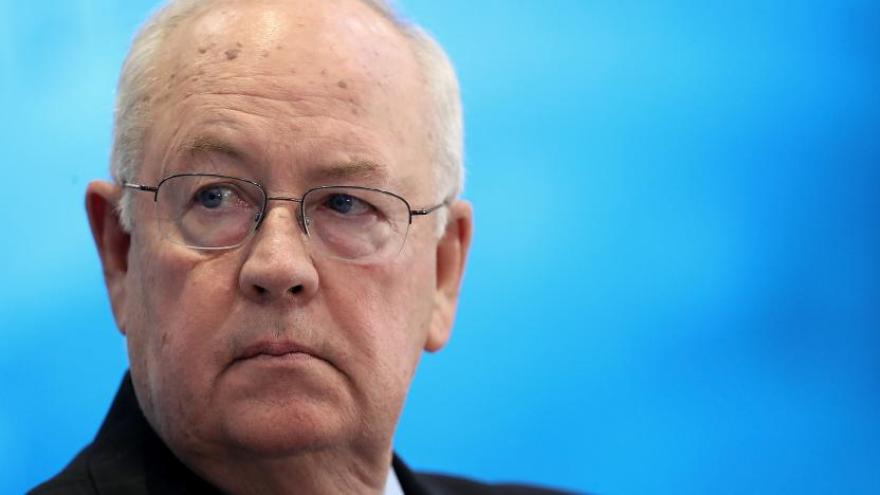 Former Independent Counsel Ken Starr answers questions during a discussion held at the American Enterprise Institute September 18, 2018, in Washington, DC. Starr, a former US solicitor general who gained worldwide fame in the 1990s as the independent counsel who doggedly investigated then-President Bill Clinton during a series of political scandals, has died. He was 76.

(CNN) -- Kenneth Winston Starr, a former US solicitor general who gained worldwide fame in the 1990s as the independent counsel who doggedly investigated President Bill Clinton during a series of political scandals, has died. He was 76.

Starr died of complications from surgery, according to a statement from his family.

"We are deeply saddened with the loss of our dear and loving Father and Grandfather, whom we admired for his prodigious work ethic, but who always put his family first. The love, energy, endearing sense of humor, and fun-loving interest Dad exhibited to each of us was truly special, and we cherish the many wonderful memories we were able to experience with him," Starr's son, Randall, said in the statement on behalf of his children.

Starr, who was a member of former President Donald Trump's defense team during Trump's first impeachment, also served as president of Baylor University from 2010 to 2016. "Judge Starr was a dedicated public servant and ardent supporter of religious freedom that allows faith-based institutions such as Baylor to flourish," Baylor President Linda Livingstone said in a statement Tuesday.

A conservative Republican, Starr's investigations into Clinton began when he was appointed by a federal appeals panel in 1994 as an independent counsel in the probe of the then-President and Hillary Clinton's involvement in the Whitewater real estate scandal. The Clintons ultimately were not prosecuted in that case, but Starr's investigation in the Clintons' dealings later expanded to include Paula Jones' allegations of sexual harassment, and that inquiry led to Starr leading the investigation into the President's affair with Monica Lewinsky.

The Lewinsky affair ultimately resulted in Clinton being impeached on two charges of lying under oath to a federal grand jury and obstructing justice, though he was acquitted by the Senate in February 1999 and served out the remainder of his term.

The scandal dominated Washington and much of the news media for more than a year, and both Starr and Clinton were named Time's Men of the Year in 1998. Starr's investigation was seen as a reflection of an era of increasingly bitter partisanship coupled with a tabloid-like interest in the personal lives of politicians. In particular, Starr's report to Congress on the affair was criticized for containing numerous lurid details about the sexual relationship between Clinton and Lewinsky.

Starr rejected accusations that his pursuit of Clinton was politically motivated.

"I was assigned to do a job by the attorney general, and that was to find out whether crimes were committed in this (Paula Jones) sexual harassment lawsuit," Starr said at the time. "The whole idea of equal justice under law means that you've got to play by the rules. It has nothing to do with the underlying subject matter. You just tell the truth."

Starr is survived by his wife, Alice, whom he married in 1970, and three children.

Born in Vernon, Texas, on July 21, 1946, Starr attended Harding University in Searcy, Arkansas, and transferred to George Washington University where he graduated with a bachelor's degree in history in 1968. He graduated from Brown University with a master's degree in political science in 1969 and received a law degree from Duke University Law School in 1973. After law school, Starr clerked for Fifth Circuit Judge David W. Dyer and Chief Justice Warren E. Burger before working for the law firm Gibson Dunn & Crutcher in Los Angeles.

After serving on President Ronald Reagan's transition team, he became counselor to US Attorney General William French Smith in 1981. Then, in 1983, he was nominated by Reagan and confirmed by the Senate as a federal judge to the US Circuit Court of Appeals for the District of Columbia. After serving as a federal judge, he was nominated by President George H.W. Bush in 1989 to be US solicitor general, in which he argued 25 cases before the Supreme Court, according to the Department of Justice. In 1993, he returned to private practice working for the law firm Kirkland & Ellis in Chicago.

Starr was also part of Jeffrey Epstein's legal team when the accused pedophile was given a deal in 2008 that immunized him from federal prosecution. He also represented Blackwater USA contractors who were accused of war crimes for killing civilians in Fallujah during the Iraq War. In 2014, four former Blackwater contractors were found guilty and sentenced to long prison terms, though Trump pardoned them in 2020.

Outside of his legal career, Starr was a dean and professor at Pepperdine University's law school from 2004 to 2010. He also served as president of Baylor University, but was fired after an independent investigation showed a "fundamental failure" to respond adequately to student sexual assault allegations.

Starr returned to the public eye in 2020, when Trump asked him to join his legal team in his first Senate impeachment trial to argue for his acquittal. The pick inevitably conjured memories of another time when Washington was consumed with an impeachment investigation, when Beltway politics grew fiercer and a president with a tumultuous personal life and zeal for dominating the media was in office.

This story has been updated with additional details Tuesday.