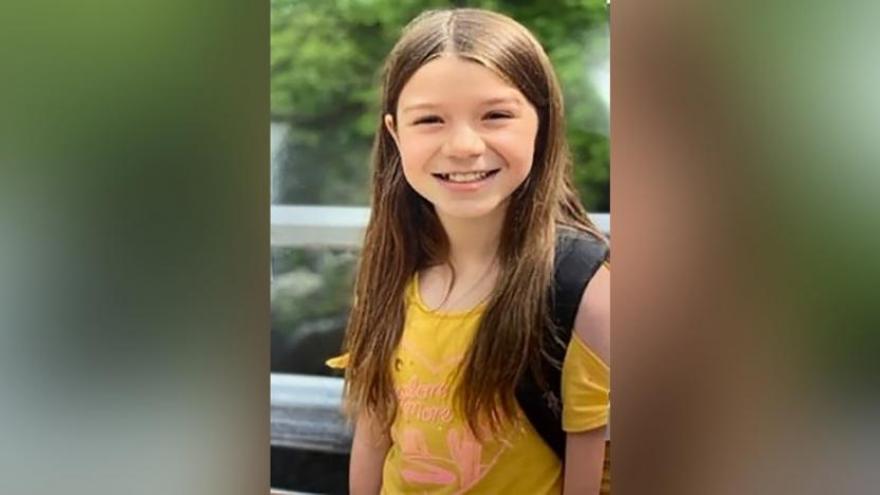 Lily Peters, who was a fourth grader at Parkview Elementary in Chippewa Falls, was found dead Monday morning, police say.

"The suspect was not a stranger, the suspect was known to the victim," Kelm told reporters. "We do not believe there is any danger to the community at this time."

The chief neither released the name of the suspect nor how the suspect and Lily knew each other. He said the juvenile is in custody. Kelm did not say whether criminal charges had been filed.

The arrest comes one day after Lily's body was found in the woods, prompting police to launch a homicide investigation.

Lily's father called the police Sunday night when she did not come home from visiting her aunt's house, the Chippewa Falls Police Department said in a news release Monday. Later that night, officers found a bicycle in a wooded area by a walking trail that is close to her aunt's house and near the Leinenkugel's Brewery Parking lot, said police.

Around 9 a.m. Monday, her body was found in the woods near the walking trail, said police. The Chippewa County Coroner's Office confirmed the remains were Lily's.

Officers believe Lily was last seen by family members the night of her disappearance, said the news release. She was supposed to be headed home from her aunt's house when she disappeared, said police.

Overnight, authorities searched for Lily by going door to door and using K9 teams. They used a drone to search the wooded area where her bike was found.

At a news conference Monday, Kelm did not elaborate on how the girl was killed or what evidence was found at the scene. Kelm said Tuesday authorities received more than 200 tips.

"These tips were critical to solving this case," he said.

A search warrant was executed at a home where evidence was collected and additional interviews were conducted, Kelm said Tuesday.

"There is still much work to be done," he said. "Our thoughts continue to be with the family during this terrible time."

Marty Maloney, spokesperson for Leinenkugel's, told CNN in a statement Lily's death was "an unspeakable, heartbreaking tragedy, and we want to express our deepest condolences to the family and friends of the victim. We are working with the authorities, and providing the help and support we can."

In a message to parents on Monday afternoon, the Chippewa Falls Area Unified School District said its buildings are on "high alert," but that law enforcement didn't indicate the need for a lockdown.

Police on Tuesday announced an increased presence around Chippewa Falls schools. "We will be increasing our patrol especially during drop-off and pick-up times," the department said in a statement.

The district is recommending that students who walk to school be picked up and dropped off by trusted family members or friends "until further notice," and parents are asked to be "more vigilant and alert during this time."

In a message sent to school staff, administrators asked that teachers "respect the family by not spreading rumors." Teachers are encouraged to make sure older students are sensitive toward younger students who may not know what happened.

Michael Houle, a senior pastor at Valley Vineyard Church in Chippewa Falls, where Lily's relatives are members, has opened the church's doors to the community as a safe space to grieve, he told CNN.

"Our mission is to reach out to our community in a positive way and to be a light in Chippewa Falls during this difficult time," he said. "We live in very generous town. Our community is coming together to meet the needs of family, community members, schools, and first responders. This is just the start and will be an ongoing process over the next weeks."

Multiple agencies are assisting in the investigation, including the Wisconsin Division of Criminal Investigation and the Wisconsin State Crime Laboratories, Kelm said. Lily's family is working with victim advocates, said Kelm, and the school district, where she attended fourth grade, said in a Facebook post it is "working closely with the police."