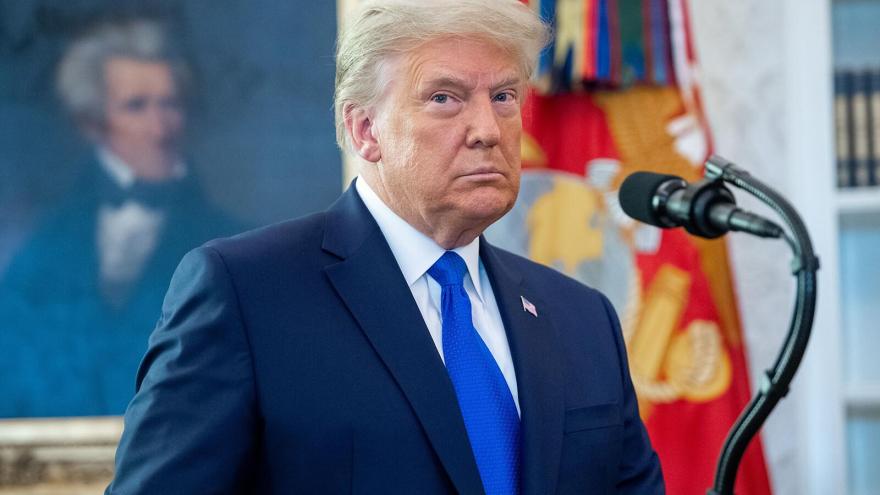 Donald Trump is seen here in the White House on December 7, 2020. Justice Department criminal prosecutors are now examining nearly every aspect of former President Donald Trump's efforts to overturn the 2020 election according to sources and copies of new subpoenas obtained by CNN.

(CNN) -- Justice Department criminal prosecutors are now examining nearly every aspect of former President Donald Trump's efforts to overturn the 2020 election -- including the fraudulent electors plot, efforts to push baseless election fraud claims and how money flowed to support these various efforts -- according to sources and copies of new subpoenas obtained by CNN.

The investigation is also stretching into cogs of the sprawling Trump legal machine that boosted his efforts to challenge his electoral loss -- with many of the recipients of 30-plus subpoenas that were issued in recent days being asked to turn over communications with several Trump attorneys.

The sweeping effort has many in Trump world concerned about the potential legal significance of being caught up in a federal investigation.

The flurry of investigative activity has involved seizure warrants, including one served to Trump counsel Boris Epshteyn for his phone, according to multiple people familiar with the matter. Epshteyn remains close to the former President and his political and fundraising operation.

The widening pool of recipients of subpoenas also includes prominent Trump deputies, such as his former White House adviser Dan Scavino, who continued to work for Trump after he left office.

The subpoena language and activity bring together the seemingly far-flung parts of the DOJ investigation.

The Justice Department previously obtained grand jury testimony, conducted searches and nabbed extensive documents about rally organization and fundraising, about efforts in and around the White House to pressure then-Vice President Mike Pence to block certification of the election results, and about the fake electors. This new round of subpoenas drills down with more specific requests about the baseless claims of mass election fraud that were being peddled to legislators, law enforcement and others.

In one of the new subpoenas viewed by CNN, along with demands for communications with a lengthy list of Trump-world figures and fake electors, the investigators ask for documents related to the raising and spending of money. Prosecutors are interested in the financing around the January 6 rally, bids to challenge the results and the Trump-aligned political organization formed after the election to push fraud claims.

The assistant US attorneys signing the subpoenas are working as part of the team led by prosecutor Thomas Windom in the DC US Attorney's Office, according to court records and multiple people familiar with the investigation. Two DC US Attorney's Office supervisors appear on the subpoenas as well, indicating the latest sweep serves both the ongoing fake elector probe and the prosecution office's larger mission to target planning of violence before January 6, according to the sources familiar with the team's work.

The subpoenas also ask for the recipients to identify all methods of communication they've used since fall 2020 and to turn over to DOJ anything the House select committee investigating January 6, 2021, has demanded -- whether they cooperated with the House panel or not.

"They're now encompassing individuals closer and closer to the President to learn more and more about what the President knew and when he knew it," David Laufman, an attorney and former federal prosecutor, said Monday on CNN's "Erin Burnett OutFront."

There are no public indications that the DOJ's January 6 probe is overlapping with the federal investigation into the handling of classified documents from Trump's White House and seizure of materials from Mar-a-Lago. However, the latest developments in the 2020 election investigation come as the documents probe has already put Trump allies on high alert for potential legal exposure.

While those around Trump have brushed off the congressional investigation into the riot on January 6 as political, there is a palpable shift in demeanor when it comes to the Department of Justice probe, as allies and advisers recognize the significance of being looped into a federal investigation, according to multiple people in Trump's orbit. The Trump-world figures now swept up in the investigation claim the department is on a fishing expedition that is impeding on privileged communications.

"It's all very distressing to me as an American and as a prominent attorney for Donald Trump," said Bruce Marks, an attorney whose communications are of interest to investigators, according to the recently issued subpoenas.

Marks took issue with DOJ seeking any of his communications with the campaign, claiming that those exchanges should be confidential under attorney-client communications principles. (The DOJ has used teams and additional court sign-offs to filter out privileged communications collected in other recent January 6 investigative steps, and not all communications records of attorneys are necessarily privileged.)

Notorious for leaking, a usually verbose Trump world has also fallen virtually silent in the wake of dozens of grand jury subpoenas being sent in recent days. Some subpoenaed have spent the last several days scrambling to find the right lawyers and understand the scope of what the Department of Justice is seeking from them. Others, already entangled in other Trump investigations, know the drill -- keep quiet until the dust settles.

An aggressive new phase as a pre-election quiet period starts

The burst of investigative activity came just as the Justice Department runs into its so-called 60-day rule, an internal policy that discourages prosecutors from taking public steps in cases that stand to influence a coming election.

Previously, investigators sought any records of interactions with a set of a dozen Trump officials, largely lawyers and those working with the fake electors including Rudy Giuliani, Epshteyn and John Eastman.

But the latest subpoenas also ask for communications with new names: high-profile right-wing Trump lawyers Sidney Powell and Cleta Mitchell, as well as Marks, a lawyer based in Philadelphia who assisted with Trump's election appeals and in an attention-grabbing court case where Giuliani tried and failed to throw out all of Pennsylvania's electoral votes.

Marks told CNN on Tuesday that he was among Trump's lawyers after the election and was reporting to and communicating frequently with Giuliani and Epshteyn over text messages and emails about post-election efforts. Epshteyn was assisting Giuliani in much of his attempts to block the vote outcome electing Joe Biden.

The warrant served to Epshteyn, seeking his phone, is another signal of how the probe has escalated.

In June, the Justice Department seized the phone of Eastman, the Trump attorney who spearheaded the far-fetched legal theory that Pence could hold up Congress' certification of Biden's win. Federal investigators also that month searched the home of an ex-DOJ official, Jeffrey Clark, who was at the center of Trump efforts to pressure the department to support his plots.

Prosecutors' willingness to obtain a warrant for Epshteyn's phone hints that they see the campaign strategist -- who is currently an adviser to Trump -- as playing an integral role in Trump's 2020 election machinations. When the agents seized and imaged his phone, they also served him a subpoena for documents, according to some of CNN's sources.

Epshteyn did not respond to CNN's requests for comment about the search of his phone. The New York Times was first to report the seizure of his phone.

The wider net the department is now casting is also evident in the types of Trump-world figures who received the latest round of subpoenas. They include former campaign manager Bill Stepien and Sean Dollman, who worked for Trump's?2020 presidential campaign as chief financial officer, as well as Scavino, Trump's former deputy chief of staff and an architect of Trump's social media presence.

Also receiving a subpoena was Bernard Kerik, a former New York City police commissioner who worked with Giuliani to find evidence of voter fraud in the weeks following the 2020 election, as did Women for America First, the pro-Trump group that organized the rally that preceded the Capitol attack.

Kerik was approached by a handful of agents who tried to ask him questions, which he refused to answer and so they handed him a subpoena, a person familiar with the episode said. The agents asked if he would be willing to talk with an attorney present. Eventually the agents handed him the document.