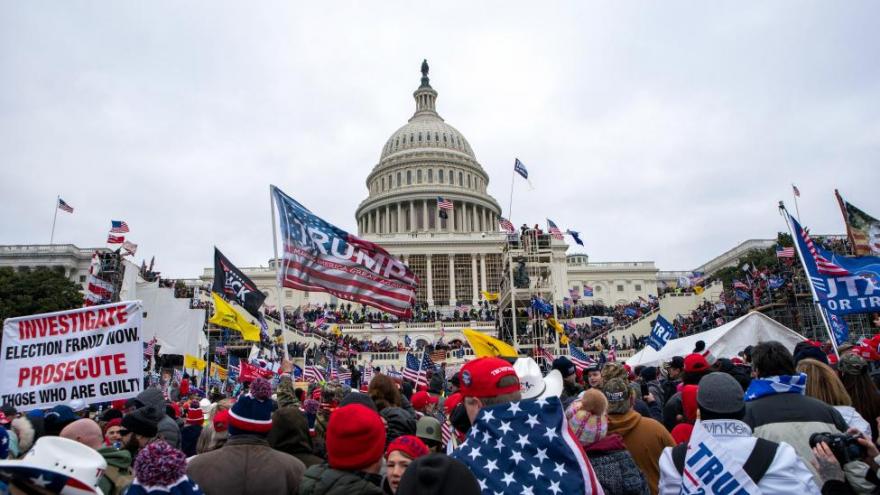 In this January 6, 2021, file photo, insurrectionists loyal to President Donald Trump rally at the U.S. Capitol in Washington.

(CNN) -- A federal judge has decided to allow the House Select Committee investigating the Capitol Hill insurrection to obtain the Republican National Committee's marketing email data leading up to January 6, 2021.

The decision -- issued late Sunday night by Trump-appointed Judge Timothy Kelly of the DC District Court -- is a significant win for the House among many ongoing court fights in which investigators are still trying to gather details related to the pro-Trump effort to overturn the 2020 election.

In the 53-page opinion, Kelly signed off on the House committee's pursuits, while rejecting several arguments Republicans and witnesses from the Trump administration have tried to make in court claiming the panel wasn't properly comprised or appropriately seeking information.

"The RNC argues that the Select Committee lacks the proper authorization to wield investigative power on behalf of the House ... But for a few reasons, especially given the House's own reading of the authorizing resolution, the Court cannot agree," Kelly wrote.

He pointed out the significance of this case, calling it an "exceedingly rare spectacle of a congressional committee subpoenaing the records of one of our country's two major political parties."

The House panel will not obtain the Republican email marketing information immediately, however. Kelly is temporarily blocking the data from being turned over to the House until at least May 5, so the RNC has a chance to appeal.

The House Select Committee first demanded data about the RNC's marketing emails in late February, and the RNC sued in March to block the handover of its information. The House investigators said they wanted to look at the back-end data related to hundreds of emails from the Trump campaign and the RNC to their supporters from November 3, 2020, to January 6, 2021, because the emails suggested the election results were fraudulent and asked for donations, according to court filings.

The House is trying to learn who worked on the email campaigns, how successful they were, and also how the marketing software company, Salesforce, reviewed and analyzed the pro-Trump rallies on January 5 and 6 and communicated with GOP officials, the court record says.

The judge noted the data, which is in Salesforce's hands, won't reveal major secrets of the Republican Party's internal workings to the Democratic-held House.

"House Defendants are not seeking, and Salesforce is not producing, any disaggregated information about any of the RNC's donors, volunteers, or email recipients, including any person's personally identifiable information. Moreover, even the RNC's own confidential information that is undeniably at issue is relatively narrow in scope," Kelly wrote.

The House Select Committee continues to pursue evidence and witnesses related to the events on and leading up to the riot. Democratic Rep. Bennie Thompson announced last week that the committee will hold eight hearings in June which will be a "mixture of some prime time and some regular" hearings.

Former President Donald Trump's former lawyer Rudy Giuliani is expected to appear before the committee this month after months of negations between lawmakers and the former New York mayor, sources familiar with the matter tell CNN.