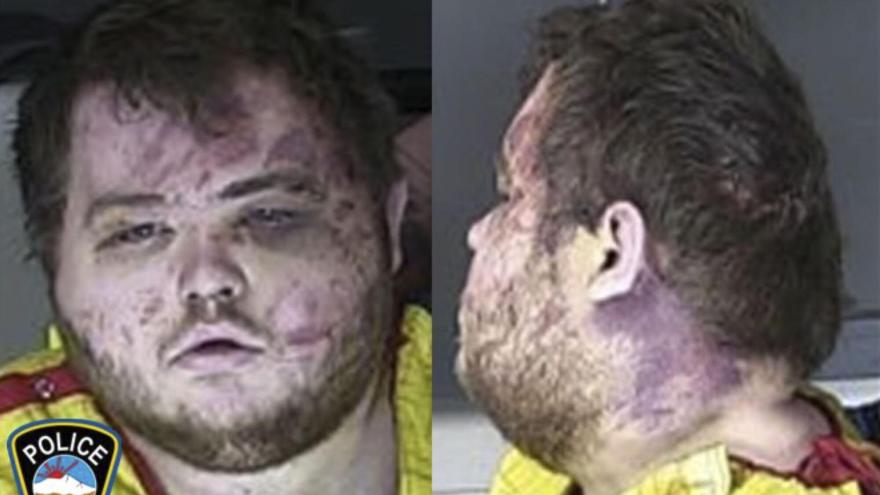 Anderson Lee Aldrich is accused of entering a gay nightclub in Colorado Springs, Colorado, and opening fire with an AR-15-style rifle, killing five people and wounding 19 others.

(CNN) -- A Colorado judge on Thursday ordered the unsealing of the case file in the 2021 bomb threat arrest of the suspect in last month's deadly shooting at an LGBTQ nightclub.

Ruling in part that the public interest outweighs the defendant's privacy, Fourth Judicial District Court Judge Robin Chittum unsealed the documents despite the objections of the 22-year-old shooting suspect, Anderson Aldrich, and their mother, Laurel Voepel.

Aldrich -- whose attorneys say identifies as nonbinary and uses they/them pronouns -- faces up to life in prison without parole if convicted on the first-degree murder charges.

The June 2021 arrest involved a bomb threat which led to a standoff at Voepel's home, according to the El Paso County Sheriff's Office at the time and her former landlord. Colorado Springs is in El Paso County.

Aldrich was in the courtroom for Thursday's hearing, with Voepel appearing via WebEx to oppose the unsealing of the file. Chittum mader her ruling after hearing arguments from Aldrich's public defender and an attorney representing Voepel.

Chittum said the new allegations involving the Club Q shooting case are enough to raise the importance of the public interest in the earlier case. The rights of the public to scrutinize the actions of law enforcement and the district attorney's office are significant, according to the judge.

"As the judge made clear, the public interest in the new allegations against Aldrich is so profound she had to order the unsealing of the bomb threat case and allow journalists and the public to scrutinize how law enforcement and prosecutors did their job," said Jeff Roberts, one of the petitioners and executive director of the Colorado Freedom of Information Coalition.

"There are so many important questions about the 2021 case that need answers, in particular why the alleged threats weren't deemed serious enough to invoke Colorado's red flag law and why the case was dismissed. Could law enforcement and prosecutors have prevented the attack on Club Q if they had acted differently?"

Video obtained by CNN last month showed Aldrich surrendering to law enforcement last year after allegedly making a bomb threat. Footage from the Ring door camera of the owner of the home showed Aldrich exiting the house with hands up and barefoot, and walking to sheriff's deputies.

Sheriff's deputies responded to a report by Voepel that Aldrich was "threatening to cause harm to her with a homemade bomb, multiple weapons, and ammunition," according to a June 2021 news release from the El Paso County Sheriff's Office. Deputies called the suspect, and he "refused to comply with orders to surrender," according to the sheriff's office. Nearby homes were evacuated.

In video obtained by CNN, Aldrich appeared to rant about the police and challenged them to breach the house where he was holed up.

"I've got the f**king sh*theads outside, look at that, they've got a bead on me," Aldrich said on the video, pointing the camera at a window with blinds covering it. "You see that right there? F**king sh*theads got their f**king rifles out."

"If they breach, I'mma f**king blow it to holy hell," Aldrich added, as he walked in and out of a bedroom.

Aldrich ended the video with what seemed like a message to law enforcement outside: "So, uh, go ahead and come on in, boys! Let's f**king see it!"

The video did not actually show any officers outside the house and it's not clear from the video whether Aldrich had any weapons in the house.

Several hours after the initial police call, the sheriff's crisis negotiations unit was able to get Aldrich to leave the house, and Aldrich was arrested after walking out the front door, which was seen in other video footage previously reported by CNN. Authorities did not find any explosives in the home.

It is not immediately clear how the bomb threat case was resolved, but the Colorado Springs Gazette reported the district attorney's office said no formal charges were pursued in the case.

Aldrich's arrest in connection to the bomb threat would not have shown up in background checks, according to the law enforcement sources who said records indicate he purchased the weapons, because the case was never adjudicated, the charges were dropped and the records were sealed. It's unclear what prompted the sealing of the records.

Aldrich also called the Gazette in an attempt to get an earlier story about the 2021 incident removed from the website, the newspaper reported. "There is absolutely nothing there, the case was dropped, and I'm asking you either remove or update the story," Aldrich said in a voice message, according to the Gazette.

The suspect allegedly entered Club Q late November 19 with an AR-style weapon and a handgun and opened fire, killing Daniel Aston, Raymond Green Vance, Kelly Loving, Ashley Paugh and Derrick Rump. At least 19 others were injured, police have said, most of whom suffered gunshot wounds.

Aldrich was taken in police custody after people in the club fought and subdued them, according to police.