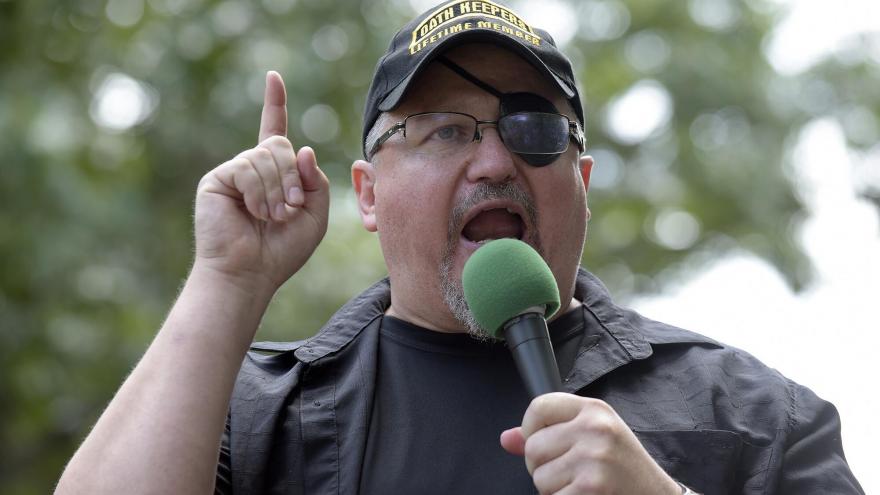 Stewart Rhodes, the Oath Keepers leader accused of seditious conspiracy to overthrow the Biden presidency, will remain in jail as he awaits trial, a judge ruled on January 26.

(CNN) -- Stewart Rhodes, the Oath Keepers leader accused of seditious conspiracy to overthrow the Biden presidency, will remain in jail as he awaits trial, a judge ruled on Wednesday.

"It is the totality of the evidence showing Defendant's leadership and strategic involvement in and advocacy for armed and violent actions against the federal government, combined with Defendant's preparedness and ready access to weapons sufficient to carry out such violent activities, that presents a significant risk of harm to others," Magistrate Judge Kimberly C. Priest Johnson of the Eastern District of Texas wrote in her opinion.

Rhodes is one of 11 defendants facing seditious conspiracy charges for his role in the US Capitol insurrection on January 6, 2021. He is accused of organizing a group that took part in the attack and then continued to plot against the Biden presidency and purchase weapons and gear after January 6. Rhodes has pleaded not guilty to his charges and is set to go to trial later this year, with proceedings in the federal district court in Washington, DC.

Rhodes' attorneys had argued that he is not a flight risk because he doesn't have a passport and he's more interested in watching his case go to public trial.

But Johnson wrote that Rhodes' "authoritative role in the conspiracy, access to substantial weaponry, and ability to finance any future insurrection, combined with his continued advocacy for violence against the federal government, gives rise to a credible threat that Defendant's release might endanger others by fostering the planning and execution of additional violent events."

"This is especially so given Defendant's technical savvy, military training, and familiarity with encrypted communication," she said.

The Justice Department had argued the Yale Law School graduate and ex-Army soldier would be a danger to the public and might flee if he were released following his arrest. His estranged wife, Tasha Adams, also testified in court earlier this week that Rhodes had been abusive toward their children and would regularly brandish guns in their house, the judge noted.

Adams said that Rhodes also feared being arrested and "installed elaborate escape tunnels in the couple's backyard, hid unregistered cars in the woods, and purchased hundreds of dollars of razor wire, which Defendant intended to install around the perimeter of the property, concealed from view, 'in case the feds ever came to his door,'" according to the opinion.

The judge, in her decision, noted that Rhodes can testify to Congress under a House select committee subpoena.