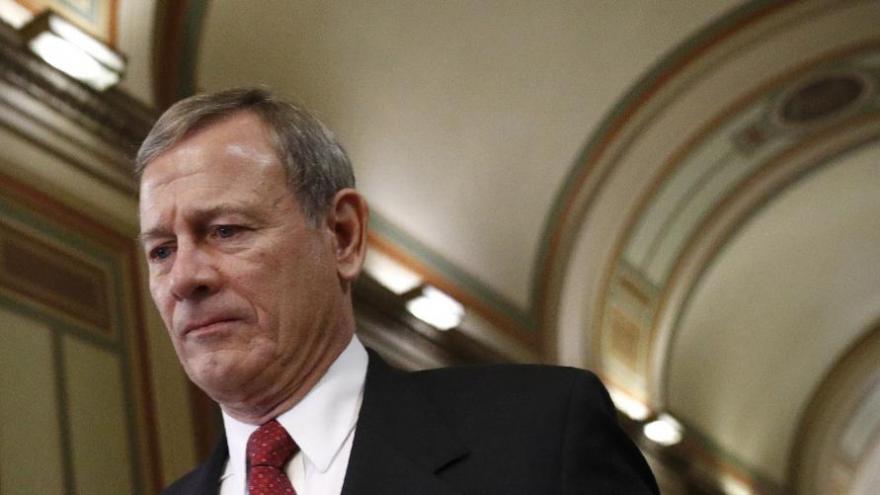 Chief Justice of the United States John Roberts departs at the end of the day in the impeachment trial of President Donald Trump on charges of abuse of power and obstruction of Congress on Capitol Hill in Washington, Wednesday, Jan. 29, 2020.

(CNN) -- Chief Justice John Roberts said Thursday that the leak of a draft opinion that would strike down Roe v. Wade is "absolutely appalling" and stressed that he hopes "one bad apple" would not change "people's perception" of the nation's highest court and workforce.

In his first public appearance since the leak on Monday, Roberts also said that if "the person" or "people" behind the leak think it will affect the work of the Supreme Court, they are "foolish."

Roberts was speaking at a meeting of lawyers and judges at the 11th Circuit Judicial Conference, while the court is on a brief recess. The justices will meet together again during their closed-door conference in Washington on May 12.

Roberts' comments come as demonstrations on both sides of the issue have erupted across the country and supporters of abortion rights fear that states in large swaths of the South and the Midwest are prepared to bar the procedure when the court issues a final decision by early July.

The draft opinion -- penned by Justice Samuel Alito and published by Politico Monday night -- calls on the court to overrule Roe v. Wade, the landmark 1973 opinion that legalized abortion nationwide.

"The Constitution makes no reference to abortion and no such right is implicitly protected by any constitutional provision," Alito wrote. He said the Roe was "egregiously wrong from the start" and that its reasoning was "exceptionally weak, and the decision has had damaging consequences."

Roberts did not want to completely overturn Roe v. Wade, meaning he would have dissented from part of the opinion, sources tell CNN, likely with the court's three liberals.

The court has confirmed the authenticity of the draft opinion, but stressed that it was not final and did not reflect the final position of any member of the court. In a statement, Roberts called the leak an "egregious breach" and a "betrayal of the confidences of the Court" and he launched an investigation into the source of the leak.