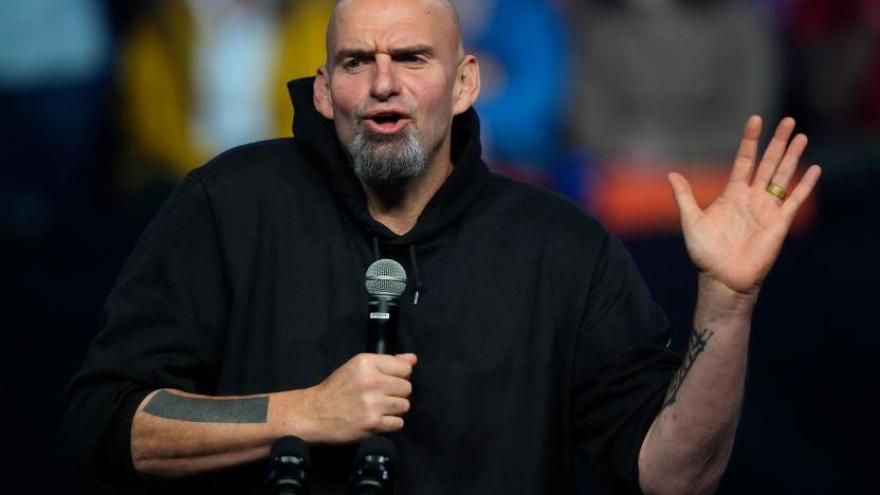 Democrat John Fetterman, here at a campaign rally on November 5, in Philadelphia, will win the Pennsylvania Senate race, CNN projects.

Fetterman, the state's lieutenant governor since 2019, and Oz, who was endorsed by former President Donald Trump, ran one of the most contentious and expensive Senate contests in the country -- all of it while Fetterman continued his recovery from a pre-primary stroke that often limited his ability to speak on the trail.

For Democrats trying to preserve their control of what has been a Senate split 50-50, with Vice President Kamala Harris as the tie-breaking vote, Fetterman's win could prove decisive.

Oz called Fetterman to concede the race at 9:30 a.m. Wednesday, according to Fetterman spokesman Joe Calvello.

Republican Sen. Pat Toomey's retirement in a state President Joe Biden won two years ago created Democrats' best opportunity to pick up a seat and save their narrow majority, and the Commonwealth entered Election Day as one of at least nine states holding what were expected to be competitive Senate races.

Fetterman's victory caps a remarkable ascent from his time as mayor of Braddock, a borough in western Pennsylvania, to the lieutenant governor's office -- which he won after unseating a fellow Democrat in a 2018 primary -- to the US Senate. A longtime progressive, he is an outspoken supporter of abolishing the filibuster, raising the minimum wage, legalizing marijuana, criminal justice reform and passing legislation to protect same-sex marriage, among other leading liberal priorities.

His success will also provide inspiration to stroke survivors and other disabled Americans, some of whom took heart from his efforts to carry on campaigning even as he exhibited the lingering effects of his May stroke. Fetterman, though he has not released his full medical records, has said he expects to be at or near full strength by the time he takes office early next year.

Though Oz himself largely steered clear of disparaging Fetterman over his stroke-related difficulties, his campaign was less cautious, leading the Republican to repeatedly distance himself from his own staffers' remarks. Asked at one point late in the campaign whether he would speak to his own patients the way his campaign addressed Fetterman, Oz responded with one word: "No."

The White House didn't weigh in on individual races over the course of election night. But following Fetterman's projected win, it sent a subtle, if pointed message: "The president had a great time with the senator-elect on Saturday," a White House official told CNN.

While many Democrats in battleground seats sought to avoid Biden's presence on the campaign trail, Fetterman embraced the president. Biden made several trips to Pennsylvania and each time in the closing months of the race, Fetterman would appear alongside of him, including in Philadelphia this past weekend.

Biden's Pennsylvania roots are an integral part of his story, his win in 2020 is central to the presidency, and now, after 20 visits to the state in his first two years in office, it marks the first Democratic pickup in the critical battle for the Senate majority.