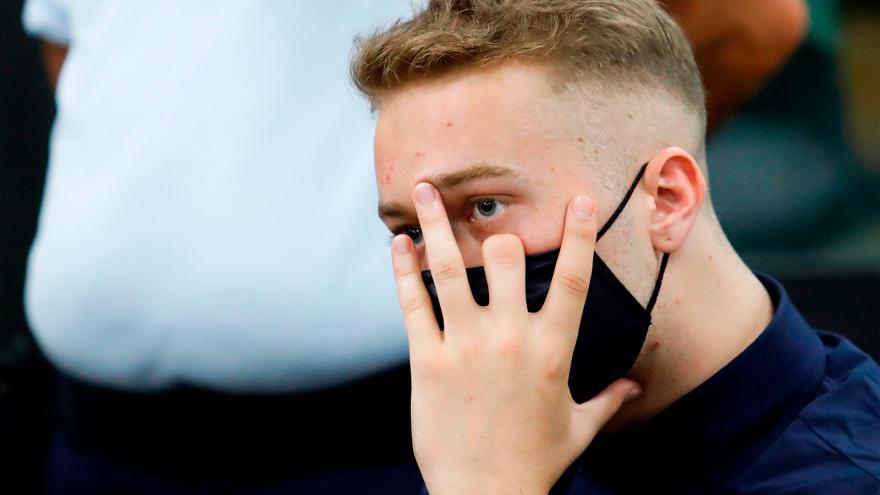 Finnegan Lee Elder attends a hearing at a court in Rome on September 16, 2020. - Remo Casilli/Pool/AFP/Getty Images

The two Americans, Finnegan Lee Elder, 21 and Gabriel Natale-Hjorth, 20, have been accused of stabbing Vice Brigadier Mario Cerciello Rega to death in Rome in July 2019.

Prosecutor Maria Sabina Calabretta told the court in Rome that given the circumstances of the case, the two should receive the maximum sentence permitted under Italian law. "I ask for the full responsibility of both for what concerns all the crimes listed, taken aggravating circumstances in consideration, and evidently considered more serious the murder crime," she said.

The lawyer representing Rosa Maria Rega, the officer's widow, called the prosecutor's request "just." The 35-year old officer was stabbed eight times at 2 a.m. on July 26, 2019, in the Prati neighborhood of Rome, near the hotel where the two men were staying, police said in a statement at the time. He was declared dead later that night.

Renato Borzone, the lawyer representing Elder, said the prosecutor's request was unsurprising and that it failed to take into account "anomalies" seen over the course of the investigation, which he said were "directed at portraying facts in a different way from the way they evolved." The defense is scheduled to begin making its closing argument on March 18.

Police allege Elder and Natale-Hjorth, who were 19 and 18 at the time of the murder, stabbed Rega as he attempted to recover a stolen backpack from them.

Police said Elder has confessed to stabbing Rega in what he said was self-defense.

He and Natale-Hjorth were allegedly sold crushed aspirin for $80, instead of a gram of cocaine, in the Trastevere district of Rome. When they found out they had been duped, police say, they went back and stole the bag of the man who put them in touch with the person who sold them the aspirin, allegedly attempting to retrieve their money and get real cocaine.