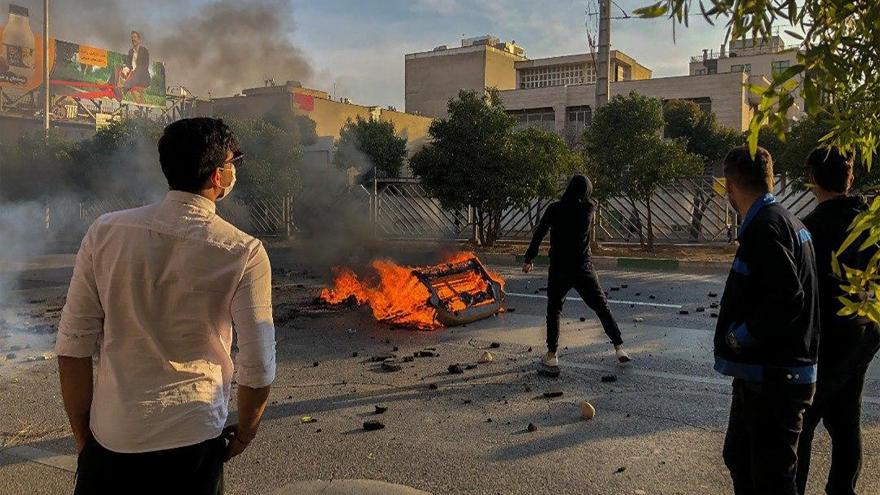 (CNN) -- Iran's Interior Minister Abdolreza Rahmani Fazil has said security forces will act against those protesting a nationwide increase in gas prices if the "vandalism" continues, according to state-run Press TV.

Protests erupted in several cities across the country Friday following Thursday's announcement by Iran's National Oil Company (NIOPDC) of at least a 50% increase in gas prices.

In the province of Sirjan at least one person has been killed, the region's government has said.

But journalists in Iran and international news agencies report the situation is much worse, citing clashes between protesters and riot police, damage to public property, and tires and garbage burning on the ground. Gunshots were also heard.

Press TV reported that Rahmani Fazli has acknowledged people's right to protest within the framework of the law but warned protesters against attempting to undermine the country's security.

"Under any circumstances, the country's security and the people's calm are the top priority for the law enforcement and our security and military forces," Rahmani Fazli is reported to have said.

'The decision must be implemented'

"If the heads of the three branches of the government make a decision [about it], I will support," Khamenei is reported to have said. "The decision must be implemented."

According to Reuters, state television reported that Khamenei blamed opponents and foreign enemies for "sabotage," saying: "The counter-revolution and Iran's enemies have always supported sabotage and breaches of security and continue to do so."

The White House released a statement on Sunday supporting "the Iranian people in their peaceful protests against the regime that is supposed to lead them."

"We condemn the lethal force and severe communications restrictions used against demonstrators. Tehran has fanatically pursued nuclear weapons and missile programs, and supported terrorism, turning a proud nation into another cautionary tale of what happens when a ruling class abandons its people and embarks on a crusade for personal power and riches," the statement reads.

The price hike reflects an increase ranging from 50% to 300%.

Iran, which is a founding member of the Organization of the Petroleum Exporting Countries (OPEC), currently has estimated proven crude oil reserves of 155.6 billion barrels, according to energy giant BP.

Earlier this month President Hassan Rouhani announced the discovery of a vast oil field containing an estimated 53 billion barrels of crude oil, which would make it Iran's second-largest oil field.

The government says the increase is in the interest of the country and argues it will prevent "fuel smugglers" from exporting Iran's oil to neighboring countries.

However, analysts and opposition figures say the main problem is a weak economy, with the country undergoing deep economic difficulties marked by rising inflation, growing unemployment, corruption and pressure from US sanctions.

Over the weekend, the hashtag #300% went viral, according to social media users and reporters in Iran. That was soon followed by a near-total internet shutdown. It's unclear if these events are related.

Iran's nationwide internet and cell phone shutdown passed the 24-hour mark, the longest such outage since at least 2013.

Researchers at Netblocks, a group that tracks global connectivity, first noticed major drops in connectivity in Tehran and other cities Friday afternoon. Iran has instituted partial or full internet blocks plenty of times in the past, but rarely at this scale.

Nearly two years ago, unrest over poor living standards led to some calling on Shi'ite Muslim clerical leaders to step down. Iranian officials said 22 people died in those protests.