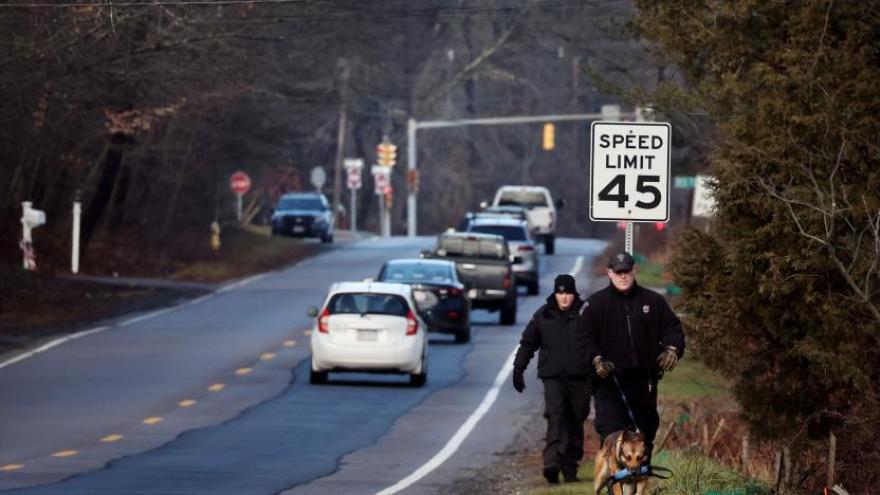 (CNN) -- Investigators combing through trash at a Peabody, Massachusetts, transfer station recovered evidence they believe will be linked to the disappearance of Ana Walshe, the mother of three who vanished under suspicious circumstances last week.

Law enforcement sources told CNN on Tuesday that materials found included a hacksaw, torn-up cloth material and what appears to be bloodstains.

The missing woman's husband, Brian Walshe, is being held on a charge of misleading a police investigation. Walshe -- who is already awaiting sentencing for a previous federal fraud conviction -- has pleaded not guilty.

Referring to the search at the Peabody transfer station -- one of several areas being searched -- the Norfolk County District Attorney's office said collected evidence will be sent for testing.

Norfolk District Attorney Michael Morrissey said previously "a number of items" were collected in searches north of Boston on Monday and are being processed and tested. His statement referred to Ana Walshe's disappearance as "suspicious."

Law enforcement sources told CNN that investigators hope to collect blood samples from Ana Walshe's sons so they have a "direct bloodline" sample to compare against traces of blood found in the couple's basement. Those results could give investigators a result that makes an almost certain match to blood and a bloodied knife found in the basement and apparent bloodstains at the refuse processing plant.

Police in the small coastal town of Cohasset are investigating Ana Walshe's disappearance. Sources told CNN her husband's internet records showed searches for how to dismember a body and prosecutors say blood and a bloodied knife were found in the couple's basement.

Ana Walshe, 39, was reported missing by her coworkers on January 4, spurring police to question her 47-year-old husband about his actions and movements in the days prior.

Many of his statements, however, were "untruthful," police alleged in an affidavit.

Investigators recently uncovered new information that turned their focus from a missing persons search to suspicions that Ana Walshe may have been killed, including her husband's internet record showing searches about dismemberment and "how to dispose of a 115-pound woman's body," according to two law enforcement sources briefed on the investigation.

On Monday night, investigators were searching through the trash of the transfer station in Peabody for the potential remains of the missing mother, according to a source with direct knowledge of the investigation. Sanitation crews brought the trash to the station, about an hour drive north of Cohasset, where the couple live, early last week, the source said.

Crime scene tape was also placed around dumpsters in an apartment complex near the home of Brian Walshe's mother in Swampscott, about 15 miles north of Boston, the source told CNN. Brian Walshe told police he went to visit his mother on January 1, the same day he told police he last saw his wife, according to the affidavit.

The ground search was called off after two days, officials said Saturday, but will resume if new information comes in.

Walshe has three children ages 2, 4 and 6, prosecutors said in court Monday. The children are in the custody of the Massachusetts Department of Children and Families, a spokesperson said.

In the meantime, her friends and family can only wait and hope.

"We are devastated. Ana is such a beacon of love and Joy," family friend Peter Kirby said in a statement to CNN. "She lights up every room. We miss her and are doing everything we can to support her 3 beautiful children."

The concern for Ana Walshe began after her coworkers at the real estate company Tishman Speyer reported her missing on January 4, prosecutors said.

Brian Walshe's attorney said in court Monday he had reached out to the office to say he had not heard from her.

In statements to police, Brian Walshe said he last saw his wife the morning of January 1. She told him she needed to fly to Washington, DC, for a work emergency, the husband told investigators, according to the affidavit.

"Ana got ready and kissed him goodbye and told him to go back to sleep," he told police, according to the affidavit.

She would typically take a rideshare or taxi to the airport, he told investigators.

That afternoon, Brian Walshe said he visited his mother in Swampscott and ran errands for her at the local Whole Foods and CVS, the affidavit says.

But investigators found no evidence of Ana Walshe taking a rideshare from their house that morning, prosecutors said in court Monday. Her phone also pinged near the home on January 1 and 2, according to commonwealth prosecutor Lynn Beland.

"The fact that he was asked a specific question and he gave an untruthful answer that led investigators out of the area caused a clear delay in the search for the missing person, Ana Walshe," the affidavit states.

Brian Walshe is under home-confinement conditions and wears an ankle bracelet as he awaits sentencing on his prior fraud conviction, meaning he must get permission to leave his house for approved activities at specific locations and times, according to police.

He made multiple unapproved trips the week of his wife's disappearance, according to the affidavit, including to a Home Depot where he was seen on surveillance video wearing a surgical mask and surgical gloves and making a cash purchase. In court Monday, prosecutors alleged he spent about $450 on cleaning supplies, including mops, a bucket and tarps.

While police were executing a search warrant on the couple's home Sunday, "blood was found in the basement area as well as (a) knife which also contained some blood," according to Beland. As of Tuesday, officials had completed their search, a spokesman for the Norfolk County District Attorney's Office said.

The warrant was obtained based on the husband's internet search history about body disposal and his large cleaning supplies purchase, the two law enforcement sources briefed on the investigation told CNN.

At his arraignment on the charge of misleading investigators Monday, a Quincy District Court judge set Walshe's bail at $500,000 cash. His next hearing is set for February 9.

Solving a homicide without a body can bring challenges at trial, but such cases have become more common as crime scene science and the use of DNA has been used to prove beyond a reasonable doubt that clues such as blood, saliva or sweat came from a specific suspect or victim.

Brian Walshe was charged with wire fraud in May 2018 after the FBI said he sold two fake Andy Warhol paintings on eBay, according to a criminal complaint filed in the US District Court of Massachusetts.

The FBI investigators allege Brian or Ana used her eBay account to sell the paintings in November 2016, less than a year after they were married.

The complaint does not charge Ana with wrongdoing but states she spoke to the person who purchased the fakes after the buyer learned the paintings were not authentic and located her work number.

Prosecutors also alleged Brian Walshe took real artwork from a friend, telling her he would sell it, but never did. He did not pay the friend for the art, prosecutors allege.

He was indicted in October 2018 by a federal grand jury on four charges in the case, including wire fraud, interstate transportation for a scheme to defraud, possession of converted goods and unlawful monetary transaction.

Last year, he pleaded guilty to three of the four counts in exchange for a recommended sentence from prosecutors of incarceration, supervised release, fines, restitution and forfeiture, documents show. He also agreed to either return the artworks or pay for them.

According to the online docket, the case remains open as the judge has not formally sentenced him, while the US Attorney's Office investigates Brian Walshe's finances.

In a letter to the court dated June 1, 2022, Ana Walshe said she was grateful her husband was able to remain at home as his art fraud case weaved through federal court.

"Brian has been working consistently on breaking the past habits of his family and we are all looking forward to the new chapter of his life," she wrote.