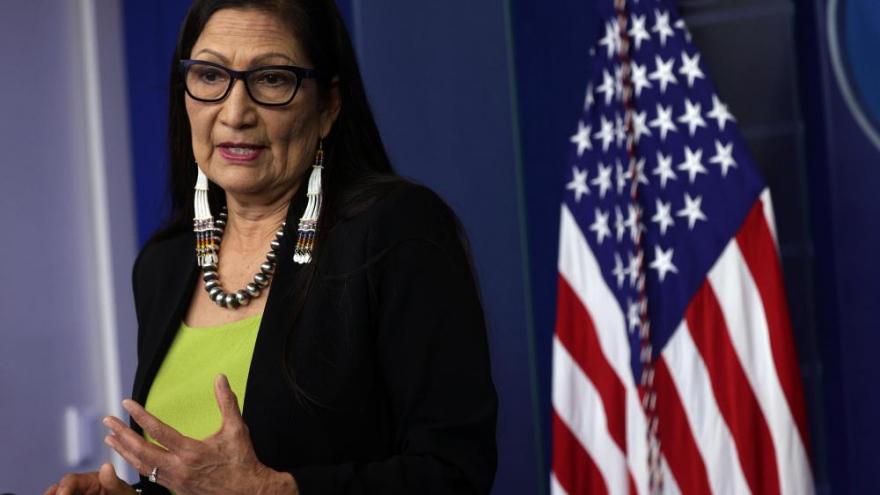 (CNN) -- The Department of Interior is launching an initiative to investigate the Native American boarding schools that forced assimilation in the 19th and 20th centuries.

"At no time in history have the records or documentation of this policy been compiled or analyzed to determine the full scope of its reaches and effects. We must uncover the truth about the loss of human life, and the lasting consequences of the schools," Interior Secretary Deb Haaland said Tuesday.

Haaland announced the Federal Indian Boarding School Initiative during her remarks at the National Congress of American Indians' midyear conference.

The announcement comes weeks after the discovery of the remains of more than 200 children on the grounds of a former Indigenous boarding school in Canada renewed calls for accountability there and in the United States.

In the 19th and 20th centuries, Indigenous children and teens in both countries attended boarding schools, many run by religious organizations or the federal government.

In the US, the schools were part of a campaign by the federal government to assimilate Native American children into White American society by separating them from their families and stripping them of their languages and cultures.

In 1819, Congress passed the Civilization Fund Act, which provided religious organizations the resources to run schools for Native American children. The legislation led to the creation of more than 100 schools, of which many were run like military training camps where children were subject to abuse, neglect and corporal punishment.

Now the Department of Interior will review its past oversight of the school program and assess how it has impacted generations of families.

The department, which plans to prepare a report detailing its findings, wants to identify boarding school facilities and burial sites across the country and review enrollment lists, which could help officials understand the full scope of the schools' impact in tribal communities, Haaland said.

Haaland noted that her own ancestors had "endured the horrors" of boarding schools and their policies, which were carried out by the department she now leads.

"The same agency that tried to eradicate our culture, our language, our spiritual practices and our people," she added.

In an op-ed for The Washington Post published earlier this month, Haaland said her great-grandfather had been taken to the Carlisle Indian School in Pennsylvania, which was the first Native American boarding school established in the US. The school's founder, Capt. Richard Henry Pratt, said the institutions aimed to "kill the Indian, and save the man."

Bryan Newland, principal deputy assistant secretary for Indian affairs at the Department of Interior, said the initiative is expected to be a years-long effort. As part of the initiative, he said, the department will also consult with tribal leaders on how to best use the information gathered, protect burial sites and respect the families and communities impacted.

"There isn't a person here whose life hasn't been shaped by the legacy of Indian boarding schools," Newland said at Tuesday's conference.