Indiana girls bring concerns over 'Men Working' signs to their lawmakers, and the city vows action 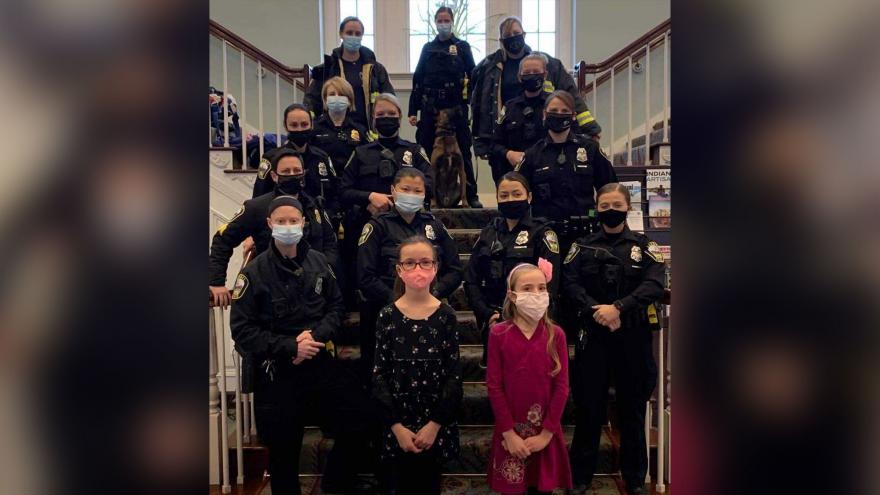 The two young sisters met women who work for the city, including police officers, firefighters and road crews.

(CNN) -- Two young sisters are using their voices to fight for gender equality in their city.

When Blair Babione, 11, and her sister Brienne, 9, noticed "Men Working" signs at construction sites around Carmel, Indiana, they were concerned about the language.

"They would ask me well, 'Why do the signs say men?'" their mother Leslie Babione told CNN. "Can girls do construction too?"

With the message to speak up when they see something wrong being taught at their school, youth groups, and church, the girls wanted to know what they could do to make a change.

"They asked me specifically how they could be a part of the solution, asking what they could do?," she said. "So they weren't just complaining, they were saying how can I be involved?"

After learning that the "Men Working" sign is not currently approved under the national Manual on Uniform Traffic Control Devices, the sisters wrote letters to their local lawmakers addressing the issue.

"Men Working signs are a problem because when little girls see them they might think 'Oh I can't be a construction worker but I want to,' and seeing a little girl feel like that makes me sad," Blair wrote to the City Council.

"You may be thinking 'well, I don't really care,'" Brienne wrote. "But a little girl might want to do construction, and she will see the sign and think, 'I can't do construction because the sign says men.'"

Moved by their engagement in civic government, Carmel City Council President Susan Finkam invited the girls to read their letters at the council's meeting on Monday.

"They were very excited for the opportunity because they felt like their voices were being heard and they had an opportunity to share information" their mother said.

Finkam thanked the girls for speaking and announced that the council would look into making the necessary changes. "We'll work with our subcontractors to make sure we do the best we can to not have them here," she said.

At the meeting, the girls were also invited to meet women who work for the city, including police officers, firefighters and road crews.

Their mother said the moment set a good example for how government can include youth in bringing matters to their attention.

"I do think that that's how we can really collaborate with youth because they are truth tellers they see through a clear lens and they need us to listen," Babione said.

She hopes to see her girls continue to raise their voices on issues they want to see changed in the community.