In final White House briefing, Fauci says he hopes he is remembered for giving it 'everything that I have' 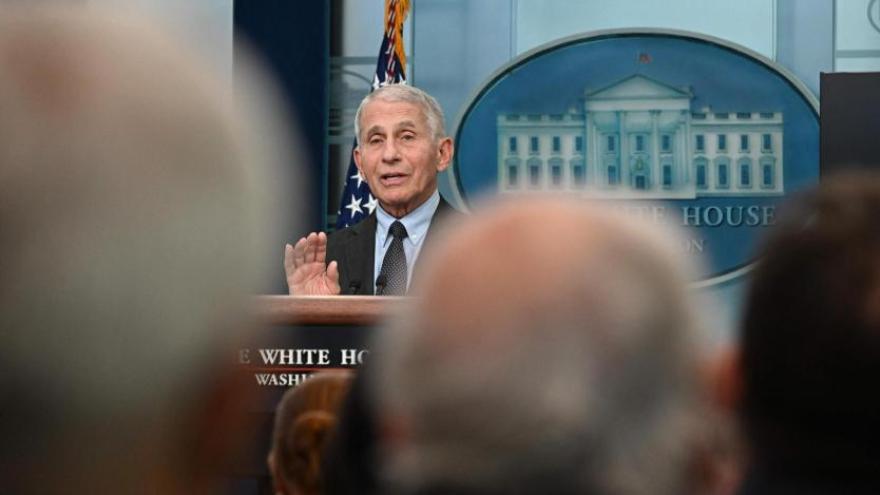 In his final White House briefing, Dr. Anthony Fauci says he hopes he is remembered for giving it "everything that I have." Fauci announced earlier this year he would be stepping down from his official positions in December.

(CNN) -- Dr. Anthony Fauci, in his final White House briefing before departing his official positions, said he hopes that he is remembered for giving his job "everything I have" and for never leaving "anything on the field."

"I'll let other people judge the value or not of my accomplishments, but I would like people to remember about what I've done, is that every day for all of those years I've given it everything that I have and I've never left anything on the field," Fauci, the director of the National Institute of Allergy and Infectious Diseases (NIAID) and the chief medical adviser to President Joe Biden, said at the White House briefing Tuesday.

"So if they want to remember me, whether they judge rightly or wrongly what I've done, I gave it all I got for a few decades," Fauci said.

Fauci added that while Covid-19 pandemic was a "really, really very important" part of his career, it represents a "fragment of the total 40 years that I've been doing it."

Fauci also reflected on how to combat misinformation for future pandemics, following what he learned from Covid-19, and said, "People who base what they say on evidence and data need to speak out more."

Asked about the dubious and questionable advice coming from those in the Trump administration at the beginning of the pandemic, Fauci said with a laugh, "You'll remember ... I contradicted those which set off a whole series of things in my life."

"The way you counter misinformation and disinformation is that to do whatever you can as often as you can, to provide correct information," Fauci said.

Fauci also said he "absolutely will cooperate fully" with any oversight hearings in the House once Republicans take over control in January.

"You may not know, but I have testified before the Congress a few hundred times, OK?" Fauci said. "So I have no trouble testifying. We can defend and explain and standby everything that we said. So I have nothing to hide."

Fauci announced earlier this year he would be stepping down from his positions as director of the NIAID and chief of the NIAID Laboratory of Immunoregulation, as well as the position of chief medical adviser to the president in December.

In the statement announcing the move, Fauci said he is "not retiring" and will "continue to advance science and public health and to inspire and mentor the next generation of scientific leaders as they help prepare the world to face future infectious disease threats."

White House Covid-19 coordinator Dr. Ashish Jha hailed Fauci's accomplishments and said he would argue Fauci has been the "most important, consequential public servant in the United States in the last half century."

"A leader and a role model for so many of us. So Tony, thank you," Jha said.

White House press secretary Karine Jean-Pierre hailed Fauci as "a source of information and facts" whose "leadership and legacy stretch far beyond the last couple of years."

"For close to four decades, and under seven Republican and Democratic presidents, Dr. Fauci has always led with the science and our country is stronger and healthier because of his leadership," Jean-Pierre said.