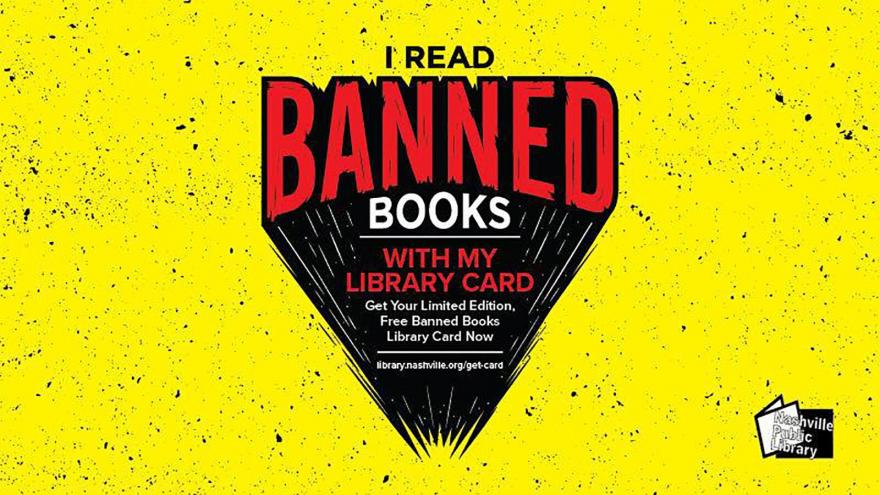 (CNN) -- The Nashville Public Library (NPL) is hoping to give out 5,000 free "banned books" library cards to local readers by the end of the month as Tennessee is among the states embroiled in the ongoing censorship debate across the nation.

The "Freedom to Read" campaign, which launched last week, is a direct response to book bans in schools.

Earlier this year, "Maus," the Pulitzer Prize-winning graphic novel about the experiences of Holocaust survivors, was removed from the eighth-grade English language arts curriculum in McMinn County, Tennessee. The district's board of education said the decision was made over concerns about "rough, objectionable language" and a drawing of a nude woman.

The board voted 10-0 to remove the book from the curriculum, saying it should be replaced, if possible, with another book without content deemed objectionable.

And in February, Williamson County Schools, a school district about 30 miles south of Nashville, upheld the removal of Sharon Creech's "Walk Two Moons" from elementary school curriculum. The book is about a girl with Native American roots who travels from Ohio to Idaho with her eccentric grandparents.

"I want Nashvillians to know: Nashville Public Library will always respect your Freedom to Read -- to independently determine what you read, and don't read, and to exercise your role in determining what your children read," the NPL Director Kent Oliver said in a news release announcing the launch of the campaign.

The library's campaign comes at a time when school and public libraries face an unprecedented number of book bans nationwide.

Last year, there were 729 challenges to library, school and university materials and services, according to the American Library Association. That's up from 156 and 377 challenges reported to the group in 2020 and 2019, respectively, and the most since the organization began tracking such challenges in 2000.

Challenges to books in American schools are not new, but the rate at which they have recently taken place is "unparalleled," said Jonathan Friedman, director of PEN America's Free Expression and Education program and lead author of the PEN America report.

But the nationwide challenges are also inspiring young readers to start banned book clubs and the Brooklyn Public Library has offered young readers anywhere in the country free library cards and access to banned books.

The Nashville Library's "campaign is our way of bringing our community together in our shared Freedom to Read, which is essential to sustaining our democracy."

The NPL card is free to all residents and existing cardholders in Davidson County, where Nashville is located. The campaign ends May 26.