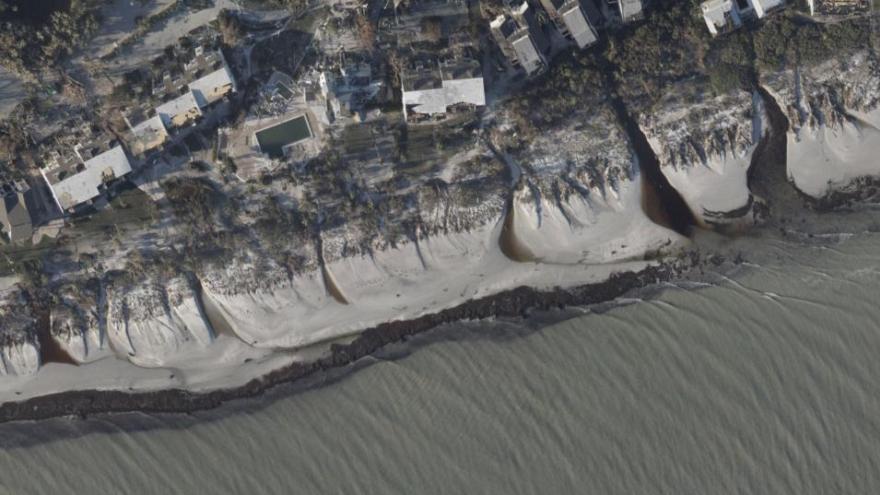 An aerial view of beach erosion near Casa Ybel Beach Resort on Sanibel Island, Florida, after Hurricane Ian is seen here on September 30.

(CNN) -- An older couple who rode out Hurricane Ian in their home on Sanibel Island in Florida could not agree on evacuating after parts of the causeway to the mainland were destroyed.

"We're going. We're going," the unidentified man told his partner as she looked down from the home's upper porch.

Fort Myers, she was told by the man and members of a rescue mission who arrived by boat.

"The bridge is down."

"I'm not ready to go," she said Thursday, staying behind.

Ian has left at least two people dead on the barrier island on the Gulf of Mexico, and volunteers from Louisiana's Cajun Navy and other rescue groups have been out on boats checking on the roughly 200 households that did not evacuate.

"When Americans are in trouble in bad spots -- usually we do war zones and conflict zones, but Hurricane Ian qualifies," said Bryan Stern, a former military intelligence officer more accustomed with operating in places like Ukraine and Afghanistan.

Stern is co-founder of Project Dynamo, a group of veterans who locate at-risk Americans in conflict zones and transport them to safety. Its name comes from the operation that evacuated Allied soldiers during World War II from the beaches of Dunkirk in France.

"Now here we are. We're going to rescue some people off Sanibel, which is cut off from the world right now," he said. "So it's very apropos."

'This is true carnage'

Ian ripped away several parts of the causeway that was the island's only access to Florida's mainland. On Thursday night, dozens of people remained stranded, according to Sanibel Mayor Holly Smith.

At least five sections of the Sanibel Causeway -- which connects Sanibel and Captiva islands to the mainland -- were washed away by the storm, Lee County officials said.

When asked if the city is currently livable, the mayor said, "Frankly, no."

Many beach cottages that lined the shores of Sanibel Island were wiped away by Ian's storm surge, new aerial imagery from the National Oceanic and Atmospheric Administration shows. Most homes appear to have sustained roof damage, along with damage from the storm surge and flooding.

"The destruction is unbelievable," Stern told CNN. "This is true carnage. It's a war zone."

Nancy and Robert Sharon were among the people Stern's outfit and volunteers from the Cajun Navy rescued on Thursday.

"I heard they weren't going to do anything after the bridge closed down but my granddaughters are in Ohio and she was crying hysterical when I talked to her," Nancy Sharon said.

Her grandchildren contacted the Cajun Navy and Project Dynamo and begged them to check for proof of life.

Some rescue teams were transported by helicopter to the islands, where they went door-to-door checking on residents, according to Florida State Fire Marshal Jimmy Patronis. Florida's National Guard was assisting in the efforts, Patronis added.

An estimated 6,400 people lived in the City of Sanibel as of April 2021, per the US Census Bureau. The islands are home to a number of hotels and resorts, as their beaches draw a significant amount of tourists each year.

A 2017 City of Sanibel count measured annual bridge traffic over the causeway at over 3 million vehicles.

Federal urban search and rescue teams were deployed from across the country.

All 15 shelters in the county that opened prior to the storm's arrival remained open, Desjarlais said. Roughly 4,000 people took shelter by late Wednesday.

"Given the amount of damage in the community, I think it's reasonable to expect that those shelters will begin to fill up a little more. We have space for about 40,000 people," the county manager added.

A boil water order was in place countywide, he said. Bridge inspections were also underway across the county. Officials hope all bridges will be inspected by Friday, Desjarlais said.

There was also "extensive damage to the buildings" on Sanibel Island, he said.

"I can tell you that in all these years I have not seen damage to Lee County from a storm like this. When you take a look at the barrier islands, particularly from the air, it's very clear to see where the storm came onshore," Desjarlais said.

The causeway will be rebuilt, DeSantis said. "But that's not something that will happen overnight."

Residents were urged to stay inside to avoid injuries and to allow first responders to assess the damage, Lee County officials said Thursday.

Smith, the mayor of Sanibel, planned to fly out to the island Friday. She told CNN's John Berman that she was seeing some images of the damage for the first time on CNN and "it's pretty emotional for me."

DeSantis said messages continued to come in from families concerned about loved ones. But many of those stranded on the island are waving and thanking rescuers for coming but staying put for now, he said.