Hurricane Ian has devastated the Fort Myers area. Some people floated on freezers to escape 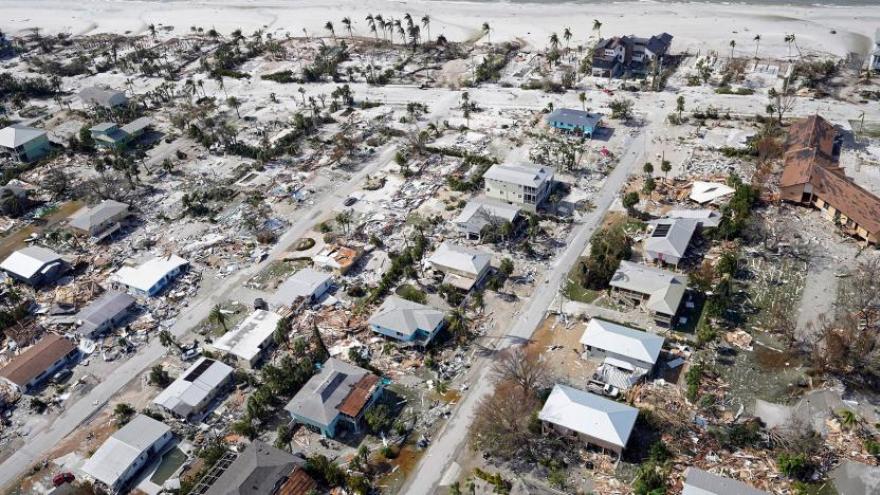 This aerial photo shows damaged homes and debris in the aftermath of Hurricane Ian on September 29 in Fort Myers, Florida.

"It's horrific," Fort Myers Mayor Kevin Anderson told CNN's John Berman Friday morning at the city's devastated marina, its boats strewn about and cement slabs ripped from the water and dropped onto land. "Look at some of these docks. They could weigh as much as a ton... and they've been thrown around like they were nothing.

"There's some large boats and they've been thrown around like they were toys."

Fort Myers Beach, which sits on a 7-mile-long island along the Gulf of Mexico, saw "total devastation, catastrophic," Fort Myers Beach Town Councilman Dan Allers said Friday. "Those are words that come to mind when you see what you see."

He also said that pictures show the damage but don't "show the magnitude of exactly what it is."

"We hear you. We understand you have loved ones on the island," the sheriff's office said, noting that it is not safe to drive there. "Bicycles cannot even make it through clear pathways."

Helicopter footage showed debris and vacant lots where homes and other buildings had been swept away in Fort Myers Beach, where only residents were being allowed to drive over the bridge Friday morning.

Florida Division of Emergency Management Director Kevin Guthrie said Friday an unknown number of bodies was found in a house in Lee County. Crews will need water to recede and special equipment to learn more.

Also Friday, Gov. Ron DeSantis said Lee County has asked for support from FEMA after experiencing a water main break at their county water utility, which means that the county does not have water at this point.

Bobby Pratt said he has lived in Fort Myers his entire life.

"I've never seen anything like this before," he said. His roof, porch and fence were damaged.

In the city of Fort Myers, rescuers had reached more than 200 people in the area, and fire officials believe there are no remaining people to be rescued, Anderson said.

Power lines and trees are down, so conditions remain dangerous, and the city is trying to clean up.

"We'd love for people to stay home," Anderson said. "It's not safe out there."

Allers told CNN's Don Lemon on Thursday night that his town was destroyed.

Allers told CNN that many people in the town struggled to get to higher ground amid the storm surge.

"I've heard stories of people getting in freezers and floating the freezers to another home... and being rescued by higher homes," Allers said.

"Every home pretty much on the beach is gone," Allers told CNN. "Some of the homes on the side streets are completely gone, and there's nothing but a hole with water."

Allers evacuated to higher ground during the storm. He later discovered that his own home was lost.

Friday, he pleaded for federal assistance.

"I don't know if anyone in Washington can hear this: If you can send help, we need it."