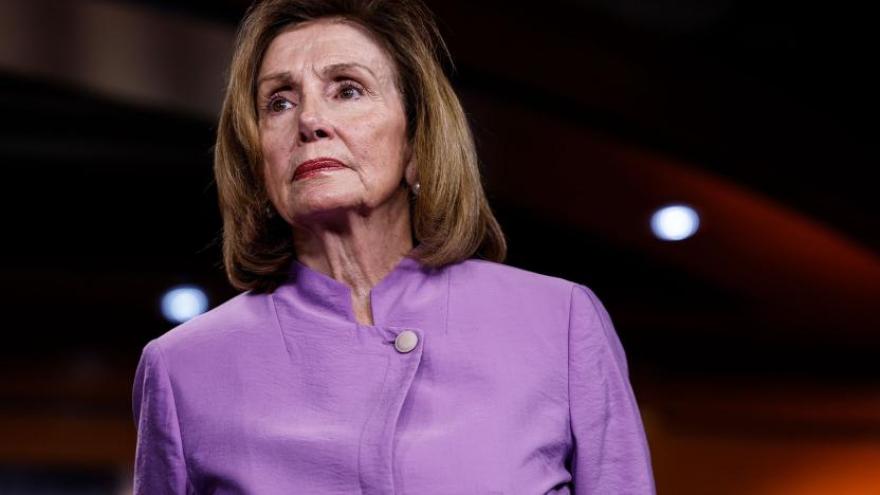 House Speaker Nancy Pelosi, here at the US Capitol on August 10, will 'address her future plans' Thursday.

(CNN) -- House Speaker Nancy Pelosi will "address her future plans" on Thursday, her spokesperson said, at a time when the longtime Democratic leader is at a personal and professional crossroads.

"Speaker Pelosi has been overwhelmed by calls from colleagues, friends and supporters. This evening, the Speaker monitored returns in the three remaining critical states. The Speaker plans to address her future plans tomorrow to her colleagues. Stay tuned," spokesperson Drew Hammill tweeted.

There are two versions of her planned floor speech that she took home Wednesday night, a source told CNN, and it's unclear which version she will deliver.

Speculation over the California Democrat's future has intensified in the aftermath of the midterm elections, with some in Washington -- including members of her own party -- anticipating she may step aside for a new generation of leadership to take the reins after the Democrats lost the House of Representatives. CNN projected Wednesday that Republicans will take control of the chamber in January, though with a smaller margin than they'd hoped.

Pelosi said in a separate statement Wednesday that House Democrats had "defied expectations" in the midterms, but didn't mention her future plans.

"This year, House Democrats defied expectations with an excellent performance: running their races with courage, optimism and determination. In the next Congress, House Democrats will continue to play a leading role in supporting President Biden's agenda -- with strong leverage over a scant Republican majority," she wrote.

"House Democrats are thrilled to have so many terrific new and returning Members to the House, who will reinvigorate our Caucus with their energy, diversity and patriotism. We salute our departing Members for their magnificent leadership, achieving landmark progress on health care, climate action, infrastructure, gun violence, veterans and more that can never be diminished."

The longtime Democratic leader told CNN's Dana Bash on "State of the Union" on Sunday that members of her caucus had asked her to "consider" running in the party's leadership elections at the end of the month, adding: "But, again, let's just get through the election."

Any decision to run again, Pelosi said, "is about family, and also my colleagues and what we want to do is go forward in a very unified way, as we go forward to prepare for the Congress at hand."

"Nonetheless, a great deal is at stake because we'll be in a presidential election. So my decision will again be rooted in the wishes of my family and the wishes of my caucus," she continued. "But none of it will be very much considered until we see what the outcome of all of this is. And there are all kinds of ways to exert influence."

Pelosi had told CNN's Anderson Cooper in an interview earlier this month that the violent attack on her husband in late October would have an impact on her decision making for her political future.

Paul Pelosi was attacked with a hammer at the couple's home in San Francisco by a male assailant, authorities have said. The assailant, according to court documents, had been searching for the speaker of the House.

Pelosi is a towering figure in American politics with a history-making legacy of shattering glass ceilings as the first and so far only woman to be speaker of the US House of Representatives.

A small, but vocal, faction of Democrats initially worked to derail Pelosi's bid to become the next speaker following the 2018 midterm elections, but she ultimately secured the votes needed to reclaim the title. Ahead of the final vote, Pelosi deployed her deal-making abilities and negotiated an agreement with some of the Democrats who had been lobbying to block her from the speakership. As part of the agreement, Pelosi backed a proposal to enact term limits for the party's top three leaders. The 2018 deal was an informal agreement, however, and caucus rules were never changed imposing any time limits on her tenure.

Pelosi was first elected to the House in 1987, when she won a special election to fill a seat representing California's 5th Congressional District. Over the years, she has earned a reputation as a powerful and formidable leader of House Democrats who has exerted significant influence and a tight grip over members of her caucus.

She has also been a fierce adversary to Republicans in Congress and in the White House, and Republicans have made her a high-profile target of criticism by their party.

When she was first elected speaker, Pelosi reflected on the significance of the event and what it meant for women in the United States.