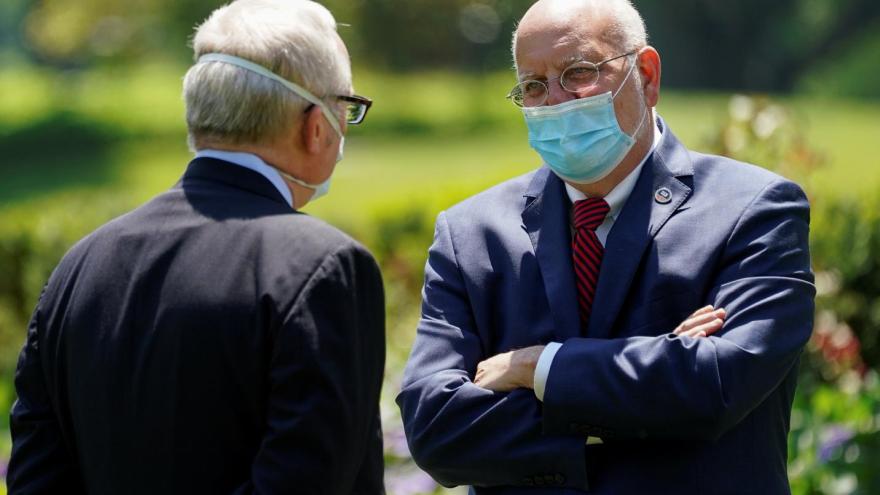 Then-assistant Secretary for Public Affairs at the US Department of Health and Human Services Michael Caputo speaks in May 2020 with former CDC Director Robert Redfield at the White House.

In its third wide-ranging investigation on the government response to the coronavirus pandemic, Democratic officials spoke with several senior officials who were at the US Centers for Disease Control and Prevention including former Director Dr. Robert Redfield, who said the Trump officials blocked the department from conveying information to Americans early on in the pandemic. The subcommittee also spoke to senior officials at the US Department of Health and Human Services during the Trump administration.

The 91-page report from the subcommittee utilized interviews with officials to make the case that former President Donald Trump and his team "installed political operatives who sought to downplay the seriousness of the pandemic."

In one instance, a senior CDC communications officer, Kate Galatas, told the subcommittee Michael Caputo, a close Trump ally who was appointed as assistant secretary for public affairs at the Department of Health and Human Services, used "bully-ish behavior" that made officials at the CDC "feel threatened."

Caputo disputed the findings in the report in an interview with CNN.

"That's false. Donald Trump hired me to communicate the seriousness of the pandemic, that's what I was hired for, I ran a team of 400 people to do that," Caputo said in an interview with CNN.

"(Galatas) was a problem employee who I wrote up once and I can understand why she didn't appreciate my management style because she was very difficult to manage," Caputo added about the comments from the CDC communications officer.

The report also contains allegations from Dr. Jay Butler, CDC's Deputy Director of Infectious Diseases, who claims he was "not really asked back to do telebriefings" after Caputo was displeased with Butler's statements, which he allegedly found "too alarming."

"I didn't tell anybody that they were too alarming," he said. "I sat through tremendously stressful briefings on a daily basis where we were talking about the deaths."

Caputo slammed the report saying he was never interviewed by the House select subcommittee but made himself available.

"I don't care what they say, or how they say it, whether it's in a political document written pre-election by the Democrats, which I have zero respect for, or whether it's in other fashions," he said.

Redfield also told the committee during his interview that administration officials "compromised" the CDC's Covid-19 guidance documents on a few occasions. The subcommittee report said Redfield told them the process "got complicated" to edit these documents and said the process gave him "PTSD." Another official Dr. Christine Casey, editor of the Morbidity and Mortality Weekly Report (MMWR) series told the committee the process with the Trump administration was "highly unusual."

The committee also wrote in its investigation that Trump administration officials in HHS attempted to influence the CDC's scientific reports on the Covid-19 pandemic in the time period of May to mid-September 2020, editing the content or blocking the publication of at least 19 different reports that they believed could have been harmful to Trump.

The report also stated HHS political appointees were successful in "altering or delaying the release of at least five scientific reports, as well as pressuring CDC to change the editorial process of the MMWR."

The subcommittee detailed that the affected reports were primarily published in the MMWR, the CDC's flagship publication, but HHS officials also interfered with at least one Health Alert Network advisory providing urgent public health information to clinicians.

In another instance early in the pandemic, CDC officials told the committee they believed Trump officials exploited CDC's Title 42 authority to close the border. Dr. Martin Cetron, director of CDC's Division of Global Migration and Quarantine, told the committee the document to close the border "was not drafted by me or my team," but was "handed to us."

Cetron added he "excused" himself from working on the document. It was signed by Redfield.

"The Select Subcommittee's investigation has shown that the previous administration engaged in an unprecedented campaign of political interference in the federal government's pandemic response, which undermined public health to benefit the former president's political goals," Clyburn said in a statement. "As today's report shows, President Trump and his top aides repeatedly attacked CDC scientists, compromised the agency's public health guidance, and suppressed scientific reports in an effort to downplay the seriousness of the coronavirus."

He added: "This prioritization of politics, contempt for science, and refusal to follow the advice of public health experts harmed the nation's ability to respond effectively to the coronavirus crisis and put Americans at risk. As we continue to recover from the coronavirus crisis, we must also continue to work to safeguard scientific integrity and restore the American people's trust in our public health institutions."

The subcommittee report concluded the "Trump administration's interference in CDC's efforts to respond to the pandemic and attacks against CDC scientists reflected a larger pattern of hostility that ultimately impacted a broad swath of public health officials and agencies."