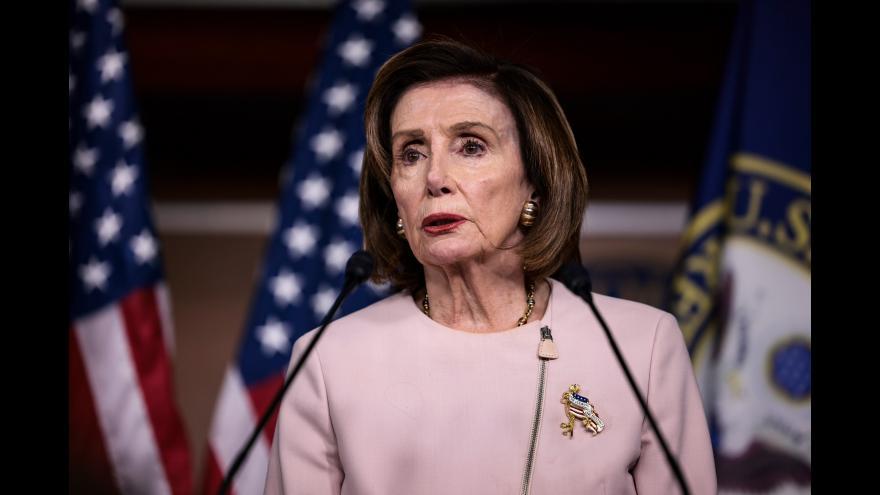 House Speaker Nancy Pelosi (D-CA) speaks at her weekly press conference at the U.S. Capitol Building on October 21, 2021 in Washington, DC. The Democratic-led House of Representatives is expected to vote May 10 evening on a nearly $40 billion bill to deliver aid to Ukraine as it continues to face Russia's brutal assault.

(CNN) -- The Democratic-led House of Representatives voted 368-57 on Tuesday evening to pass a roughly $40 billion bill to deliver aid to Ukraine as it continues to face Russia's brutal assault.

All 57 votes in opposition were from Republicans.

The measure will next need to be passed by the Senate before it can go to President Joe Biden to be signed into law.

Senate Majority Leader Chuck Schumer said earlier in the day on Tuesday that after the House approved the package, the Senate "will move swiftly" to get the measure passed and sent to Biden's desk.

Lawmakers unveiled bill text earlier in the day ahead of the House vote. The legislation the House approved provides funding for a long list of priorities, including military and humanitarian assistance.

In the Ukraine aid supplemental that was signed into law in mid-March, $3 billion in this kind of funding was included. The Biden administration has been using that funding to provide military assistance to Ukraine in a series of presidential drawdown authority packages. The latest package of $150 million was authorized on May 6.

The bill also provides $6 billion in Ukraine Security Assistance Initiative funding, another way the Biden administration has been providing Ukraine with military assistance. USAI funding allows the administration to buy weapons from contractors and then provide those weapons to Ukraine, so this method does not draw directly from US stocks.

According to a fact sheet from House Democrats, the funding will be used to assist Ukrainian military and national security forces and will go toward weapons, equipment, training, logistics and intelligence support as well as other needs.

There will also be roughly $9 billion to help restock US equipment that has been sent to Ukraine. That comes as many lawmakers have raised concerns about replacing US stocks of weapons the US is giving to Ukraine, especially stingers and javelin missiles.

To address humanitarian needs, the bill will include $900 million to bolster refugee assistance, including housing, trauma support, and English language instruction for Ukrainians fleeing the country.

The measure provides an additional $54 million that will be used for public health and medical support for Ukrainian refugees.

"This package, which builds on the robust support already secured by Congress, will be pivotal in helping Ukraine defend not only its nation but democracy for the world," Speaker Nancy Pelosi said in a letter to House Democrats on Tuesday after the bill text was released.

The House vote comes after Biden called on Congress to "immediately" pass a new Ukrainian aid bill as he warned that existing aid would soon run out.

"Get it to my desk in the next few days," Biden said in a statement on Monday.

Biden had previously urged Congress to pass additional pandemic relief funding and the new assistance to Ukraine in the same bill.

But he said on Monday that congressional leaders told him to decouple the effort in order to more quickly get the aid to Ukraine.

Biden initially requested $33 billion to help Ukraine as it fights Russia, but Congress has proposed billions more for food aid and military equipment.

"We cannot afford delay in this vital war effort," Biden said in the statement. "Hence, I am prepared to accept that these two measures move separately, so that the Ukrainian aid bill can get to my desk right away."