Homes in White neighborhoods are being appraised at higher values than in communities of color, new report finds 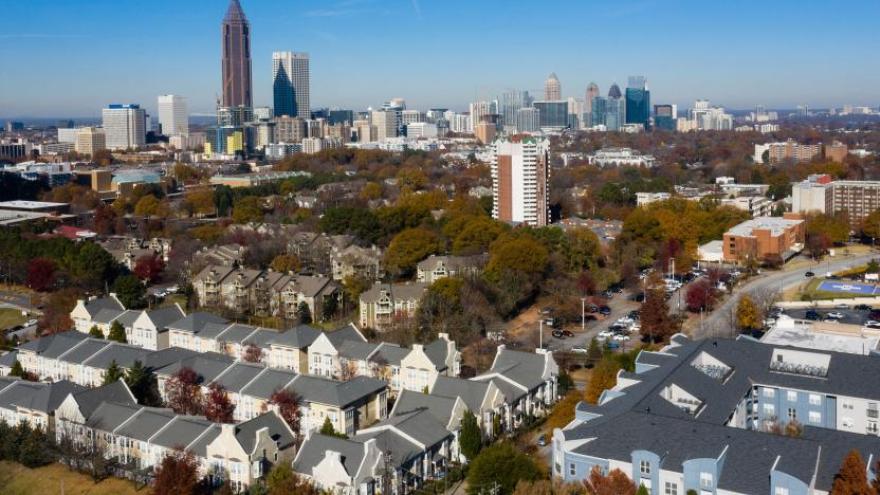 Homes in White neighborhoods are being appraised at higher values than in communities of color, a new report finds. Pictured is The Bank of America Plaza tower behind a housing development in Atlanta last year.

(CNN) -- Homes in predominately White neighborhoods are being assessed at twice the value of homes in communities of color with comparable amenities, according to a new report released Wednesday.

The report found that the racial gap in home values had increased by 75% in the last decade, underscoring numerous accounts from Black families in recent years that their homes were appraised at higher values when they removed all evidence from the house of their race. Some families also had White friends stand in for them during the appraisal to get a higher value. The practice is known as "whitewashing."

The findings come after the Federal Housing Finance Agency released information last week from 47 million appraisal reports completed between 2013 and the second quarter of 2022. Researchers say they focused on metropolitan areas with a population above 500,000 and at least 50,000 residents of color to ensure their findings were robust.

The report, titled "Appraised: The Persistent Evaluation of White Neighborhoods as More Valuable Than Communities of Color," notes that the racial inequities were exacerbated by the Covid-19 pandemic, which resulted in an unprecedented rise in home values. In the last two years, the value of the average home in a White neighborhood rose by $136,000 compared to $60,000 in a community of color, according to the report.

Metropolitan areas with the largest home price inflation are seeing the racial gap in home appraisals grow even faster. The research notes that the inequality is three times higher in those communities than in stable housing markets.

"Racial inequality in home values directly contributes to persistent racial wealth gaps and residential segregation, which in turn influences racial inequalities in health, income, and educational outcomes," the report says. "Home value inequalities are the result of appraisal practices that elevate White spaces as the most valuable.

According to the U.S. Bureau of Labor statistics, 97% of property appraisers are White.

Junia Howell, co-author of the study and an urban sociologist at the University of Illinois-Chicago, said the report's findings reveal an "obscene amount of inequality" in home appraisals. Howell said the method being used by appraisers gives them the authority to determine a home's value and what they consider a comparable neighborhood. Race, she said, is often a factor.

"I think the method and the practice is explicitly racist," Howell said.

Howell said the appraisal industry needs to "deal with the actual method, which was built upon racist understandings of land being more valuable because of who lives there."

"Until we change our method and change how we fundamentally think about what defines what a house is worth and how we get to that number, we are going to have a racially unequal system," Howell said.