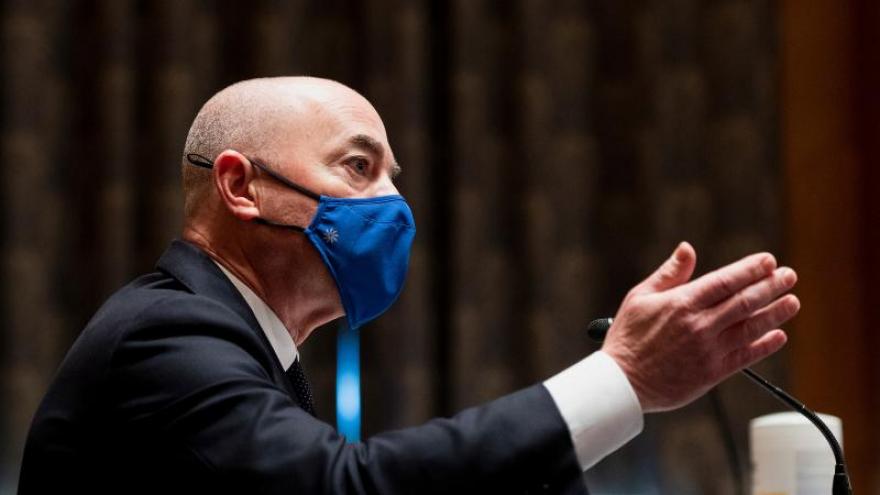 (CNN) -- Domestic terrorism is "one of the greatest threats" to the United States, newly minted Homeland Security Secretary Alejandro Mayorkas told CNN on Wednesday, underscoring that the threat persists.

"To see the insurrection, the horrific acts of January 6, were not only personally devastating, but created in me a commitment to redouble our efforts, to fight hate and to fight one of the greatest threats that we face currently on our homeland, which is the threat of domestic terrorism," Mayorkas said in an interview with CNN's Ana Cabrera that aired on "The Situation Room with Wolf Blitzer."

Mayorkas, who was sworn in Tuesday, is the first Senate-confirmed Homeland Security secretary in nearly two years and will oversee the department's sprawling mission, which includes cybersecurity, immigration and Covid-19 response, among many others. He's the first Latino and immigrant to helm the department.

Mayorkas underscored that the threat of domestic terrorism "is persistent" and said the department will continue to work with its state and local partners to combat it. The secretary conceded that one of the challenges is identifying "where the line between hateful rhetoric and hateful action takes place."

The concern was reiterated by the department's acting deputy secretary, David Pekoske, who said Wednesday that domestic violent extremism is a "particular area of concern" heading into Super Bowl weekend, speaking at a news conference with the NFL and other law enforcement officials.

The Department of Homeland Security is also at the forefront of responding to the coronavirus pandemic and helping to enforce the use of masks.

On Sunday, the department said Transportation Security Administration workers have the authority to enforce President Joe Biden's transportation mask mandate at TSA screening checkpoints and throughout the commercial and public transportation system.

"The enforcement of these directives is quite frankly a challenge. We rely, at least in part, upon the voluntary compliance of the American public. Let the death toll itself be a mandate to people to wear masks, to distance appropriately, to take the precautions that are required to protect the health and well-being of one another," he told CNN.

Mayorkas, who has set an empathetic tone, told CNN on Wednesday: "The cruelty of the prior administration has come to an end."

The secretary will chair the task force focused on reunifying families separated at the US-Mexico border. Mayorkas appeared to choke up when asked about what had gone through his mind when he heard the cries of children who had been taken from their parents under the Trump administration.

"I am a father. I am a husband. I am a son. I am a brother. I have not heard before a pain as acute and heartbreaking as that, and it is our commitment to make sure that pain is not felt again," he said.

During his presidential campaign, Biden pledged to set up a task force focused on identifying and reunifying families separated at the US-Mexico border under the Trump administration's controversial "zero tolerance" policy. The administration's new task force -- announced Tuesday -- stems from that promise.

It will be charged with identifying all children separated from their parents or legal guardians on the southern border, facilitating and enabling the reunification of children with their families, and providing regular reports to the President, including one containing recommendations.

"Our responsibility is to reunite the families and to support and facilitate their healing," Mayorkas said, adding that that could include health care and using authorities in the immigration system.

The establishment of the task force was one of a series of immigration executive orders signed Tuesday. The orders largely direct reviews of policies and do not have an immediate impact, concerning immigration advocates and attorneys scrambling for answers on the future of migrants subject to Trump-era policies.

Mayorkas said he's been involved in discussions about ending the Trump-era policy that requires migrants, some seeking asylum in the US, to wait in Mexico until their court dates. Thousands continue to wait in squalor and often in dangerous conditions.

"The urgency of that also cannot be overstated," he said.