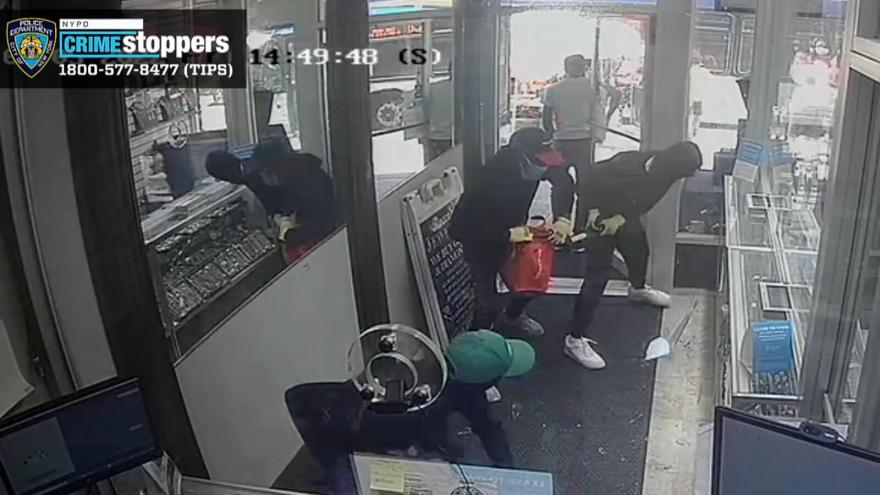 A group of masked men in New York made off with more than $2 million in jewelry on August 5, according to the NYPD.

(CNN) -- A group of masked men in New York made off with more than $2 million in jewelry Friday afternoon, according to the NYPD.

Security camera footage released by NYPD Crime Stoppers shows a man in a white T-shirt and black hat peering through the glass door of Rocco's Jewelry in the Bronx before holding the door open and letting three people in masks run in. He then appears to stand as a lookout as the three men are inside.

In less than 30 seconds, the masked men in the video use a hammer to smash display cases and stuff trays of "a large amount of high-end diamond jewelry" into a bag, according to the NYPD. The police said they fled with approximately $2.15 million worth of jewelry.

The four men fled on foot, and no one was injured in the heist, the release said. The NYPD said it estimates the men are in their 20s.

Police said the man who held the door open for the others was buzzed in by an employee.

The NYPD is investigating the robbery, the police said. Crime Stoppers is offering a reward of up to $3,500 for information leading to an arrest and indictment in the case, according a tweet from NYPD Crime Stoppers.

CNN has reached out to Rocco's Jewelry for comment.