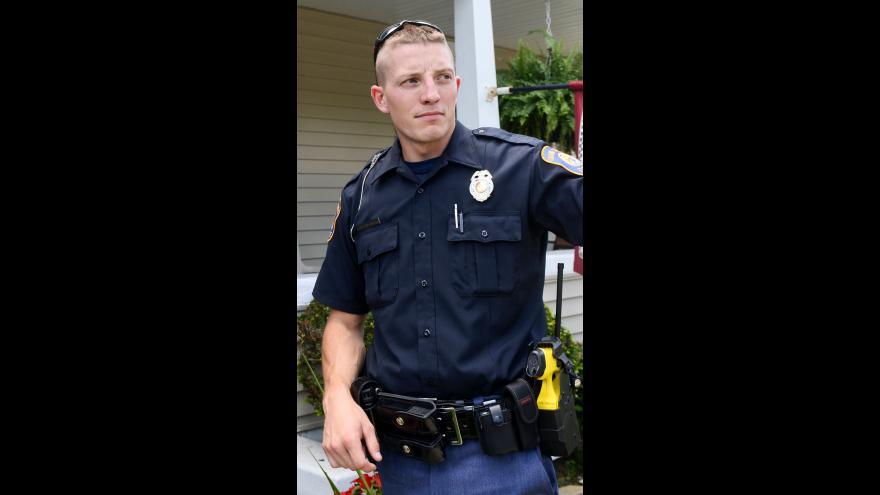 Former Grand Rapids Police Officer Christopher Schurr is pictured. Schurr has been fired less than a week after being charged with second-degree murder in the death of Patrick Lyoya, City Manager Mark Washington announced June 15.

(CNN) -- A Grand Rapids, Michigan, police officer has been fired less than a week after being charged with second-degree murder in the death of Patrick Lyoya, City Manager Mark Washington announced Wednesday.

The former officer, Christopher Schurr, waived his right to a hearing after the city's police chief and the labor relations officer recommended he be terminated, according to Washington.

CNN has reached out to Schurr's lawyer for comment.

"Due to the on-going criminal matter and the potential for civil litigation, I will not be providing any additional comment concerning Mr. Schurr at this time," Washington said.

Lyoya, a Black man, was shot to death on April 4 by Schurr, a White officer trying to arrest him after a traffic stop. The case has drawn national attention, and Lyoya's final moments were captured in multiple videos later released to the public. Lyoya was shot in the back of the head.

Schurr's lawyer, Mark Dodge, said at arraignment Friday that his client was "justified in his use of force" and entered a not guilty on the count of second-degree murder.

A judge set Schurr's bond at $100,000 and put in place a number of conditions for his pretrial release, including that Schurr not buy or possess guns and not drink liquor or use drugs.

Schurr's attorneys said in a motion for bond that the officer saw the Nissan Lyoya was driving "moving suspiciously slowly and thought it matched the description of a recently reported stolen vehicle." He "ran" the car's plate and realized it didn't match the car, which led him to believe the car might be stolen.

During the traffic stop, Lyoya fled and Schurr tried to gain custody, according to the motion. The officer believed Lyoya "obtained full control of (his) Taser" and he was "in danger of serious bodily injury or death."

Schurr's training and experience led him to believe "a person who attempts to flee and resist arrest may have outstanding criminal charges or is currently involved in criminal activity and is avoiding being taken into custody," according to the motion, which did not name Lyoya.

The officer's attorneys said "evidence presented at trial will ultimately show that Officer Schurr was legally justified in his use of force."

"This is just based on the facts and making a decision in this case," Becker told reporters, referring to the second-degree murder charge.

Michigan State Police Det. Sgt. Aaron Tubergen, whose agency investigated the shooting, said in a court document supporting the ex-cop's arrest warrant that Lyoya tried to get away from Schurr after the officer asked for his license. He traveled about 30 feet from the car before being tackled to the ground.

There was a physical altercation, with Schurr demanding Lyoya, "stop fighting, stop resisting," according to a transcript of Tubergen's testimony last week to the judge who signed off on the second-degree murder charge and the warrant.

Tubergen said Schurr deployed his Taser twice. After Lyoya gained control of the Taser, Schurr made "many commands" for him to drop the device and a physical altercation followed with both men on the ground.

"It appears that Patrick was then on his hands and knees. Again, Officer Schurr was on his back," the detective sergeant said, according to the transcript. "Officer Schurr pulled his duty firearm from its holster and then fired one round into the back of Patrick's head, causing his body to go limp."

After the death protesters poured onto the streets of Grand Rapids, a city with a history of tension between Black residents and police.

Lyoya, 26, had three outstanding warrants at the time he fled the traffic stop, and an autopsy revealed his blood-alcohol concentration was more than three times the legal limit.

His driver's license was revoked in March because of a third substance abuse conviction in 10 years, according to public records. He had three open warrants at the time of the stop, according to a CNN review of state records.

It's not clear if Schurr knew of the warrants or the revoked license at the time Lyoya fled on foot.