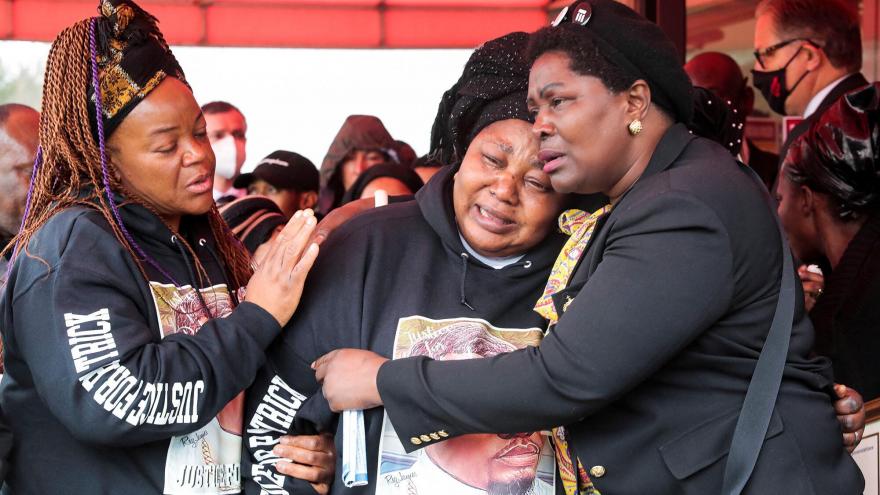 Dorcas Lyoya gets emotional following the funeral of her son, Patrick Lyoya.

(CNN) -- The chief of police in Grand Rapids, Michigan, on Monday identified Christopher Schurr as the officer who fatally shot Patrick Lyoya earlier this month.

Lyoya's shooting took place on April 4 following a foot chase and apparent struggle over a taser after Schurr pulled him over for an allegedly unregistered license plate.

Police Chief Eric Winstrom previously declined to release Schurr's name, arguing the city had a long-standing policy not to release the names of employees under investigation even as the officer's name was circulating publicly. Winstrom said he decided to identify Schurr "in the interest of transparency, to reduce ongoing speculation, and to avoid any further confusion."

Winstrom said Schurr remains on administrative leave and has been stripped of his policing powers, pending a criminal investigation by Michigan State Police and an internal Grand Rapids Police Department investigation that will determine whether he violated department policies.

The release of Schurr's identity comes three days after the Rev. Al Sharpton, while speaking at Lyoya's funeral, demanded the release of the officer's name.

"How dare you hold the name of a man who killed this man?" Sharpton said Friday at a crowded Renaissance Church of God in Christ in Grand Rapids. "Every time a young Black man or woman is arrested in this town, you put their name all over the news. Every time we're suspected of something, you put our name out there."

CNN has attempted to reach out to Schurr for comment, but did not hear back.

The Grand Rapid Police Officers Association said in a statement posted Tuesday on its Facebook account that it supports Schurr, who has worked in law enforcement for about seven years.

The association acknowledged its statement is not intended to "detract from the heartache the Lyoya family is experiencing from the loss of their family member."

"As tragic as this case is all the way around, we feel a thorough review of this entire situation will show that a police officer has the legal right to protect themselves and community in a volatile dangerous situation such as this, in order to return to his/her family at the end of their shift."

The footage begins with the officer walking toward Lyoya's car.

The video shows Lyoya, 26, turning his back to the officer and appearing to walk toward the front of the car. The officer puts his hands on Lyoya's shoulder and back, saying "no, no, no, stop, stop," and Lyoya is seen resisting the officer's touch and backing away from the officer.

The officer tackles him to the ground. Video shows Lyoya getting up and standing, and the officer drawing and deploying a Taser. Police said the Taser's prongs didn't hit Lyoya.

The two end up physically struggling on the ground, where the officer shot Lyoya, who wasn't armed at the time of the shooting, according to a family attorney.

The officer who shot Lyoya is heard saying "Let go of the Taser" before firing the fatal shot.

An autopsy commissioned by Lyoya's family determined he was shot in the back of the head.