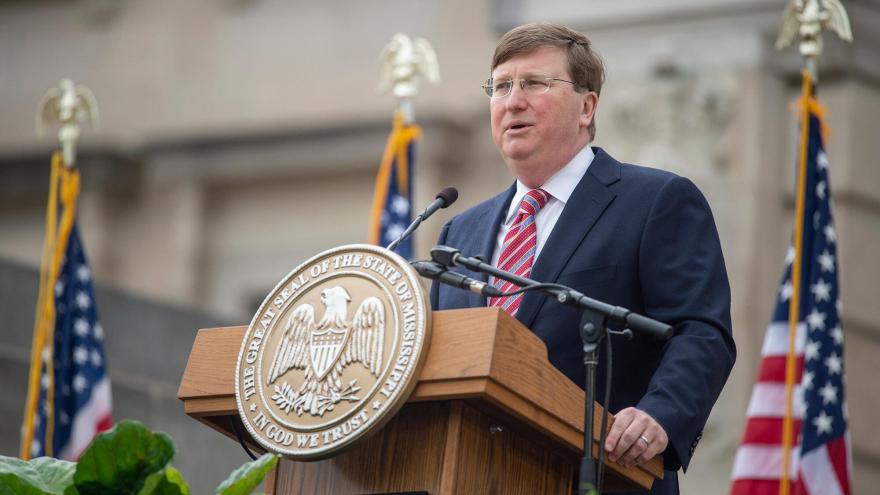 Mississippi Governor Tate Reeves defended his decision to east Covid 19 restrictions. Reeves is shown giving his 2021 State of the State Address at the state Capitol in Jackson, Miss., Tuesday, Jan. 26, 2021.

(CNN) -- Several governors on Sunday defended easing Covid-19 restrictions in their states against top health officials' warnings that Americans should remain vigilant against highly transmissible variants and that the US could see another spike in cases.

In some of the more extreme rollbacks, Mississippi Gov. Tate Reeves and Texas Gov. Greg Abbott, both Republicans, lifted mask mandates and allowed businesses to operate at full capacity in their states -- stances President Joe Biden blasted as "neanderthal thinking."

Reeves defended his decision on "State of the Union" on Sunday, telling CNN's Jake Tapper that the number of hospitalizations has "plummeted" in his state. "The fact is the numbers don't justify government interaction at the levels that we are seeing in other states," he said.

Some governors, fighting Covid fatigue in their states, have begun to lessen restrictions after weeks of declines in infection numbers and as coronavirus vaccines are being rolled out nationwide. But case numbers now seem to have plateaued at high levels and highly contagious variants are already circulating in the US, leading top health officials -- including Dr. Anthony Fauci, director of the National Institute of Allergy and Infectious Diseases, and Centers for Disease Control and Prevention Director Dr. Rochelle Walensky -- to caution that lifting restrictions prematurely could lead to another surge in coronavirus cases.

Michigan Democratic Gov. Gretchen Whitmer, who has increased restaurant capacity in her state from 25% to 50%, told Tapper on Sunday that because the number of hospitalizations is low and the vaccinations are high in the state, she feels they can "do this responsibly."

"We're kind of at the 10-yard line and we're taking another 10 yards ahead, where some are at the 50 and dropping the mask mandate, and that's the dangerous situation," she said. "But there is no question we are going to keep tethered to the science, and watching the numbers to keep people safe."

Michigan continues to have a mask mandate in place.

Arkansas Gov. Asa Hutchinson, a Republican, relaxed restrictions on opening up businesses in February but will lift the mask mandate at the end of March. He told Fox News' Chris Wallace on Sunday that "at some point, we have to rely upon common sense and good judgment versus mandates" and that businesses should have some flexibility. Asked about going against guidance from health officials and Biden, Hutchinson said he could reinstate the mask mandate if the case or hospitalization numbers rise.

"If we see the cases spike up, if we see the hospitalizations go up, then we can reinstitute the mask mandate because it's a ramp, it goes until March 31st with specific guidelines. We can take the action that's needed," he said.

'We can't give up the defense'

Fauci told Tapper Thursday that the US shouldn't ease Covid-19 restrictions before the number of new coronavirus cases falls below 10,000 daily, "and maybe even considerably less than that." And a study published by the CDC on Friday found that from March 1 to December 31, requiring people to wear a mask outside their home or in retail businesses and restaurants was tied to a 0.5 percentage point decrease in the daily growth rate of Covid-19 cases up to 20 days after the mask mandate was implemented. Decreases up to 1.8 percentage points were seen up to 100 days later.

Mask mandates were associated with a 0.7 percentage point decrease in daily rates of Covid-19 deaths up to 20 days after implementation and decreases of up to 1.9 percentage points up to 100 days later, respectively, according to the researchers.

Dr. Tom Frieden, the former director of the CDC, on Sunday acknowledged that there were harms to closing businesses and schools -- economic, educational, and personal hardship, and health harms for people who couldn't work, and said it was important to reopen the economy as safely as possible.

"The only freedom a mask inhibits is the freedom of the virus to spread and kill people," he told Wallace. "Masks work, mask mandates work, and lifting mask mandates is very dangerous, particularly with the risk of more dangerous variants emerging and spreading."

Ohio Gov. Mike DeWine, a Republican, said Sunday that now is not the time to give up defensive measures to combat the coronavirus and that wearing masks work.

"With the vaccine, we're now on the offense, that's the great thing, but in Ohio, we can't give up the defense. We have found these masks work exceedingly well. Schools are a prime example, We've seen it in our retail, 93% of Ohioans when they go into a retail establishment are wearing masks, so they've done a phenomenal job," DeWine told ABC's Martha Raddatz on "This Week."

Although he is ending the mask mandate in the state, Reeves told Tapper he encourages Mississippi residents to continue to wear masks.

"I not only recommend it, but I also encourage it," he said. "If you have not received the vaccination and you're going into a large crowd or if you're going out to dinner, I strongly encourage Mississippians and people across the country to wear a mask because I believe that it does reduce the ability of individuals to spread the virus. No question about that, Jake."