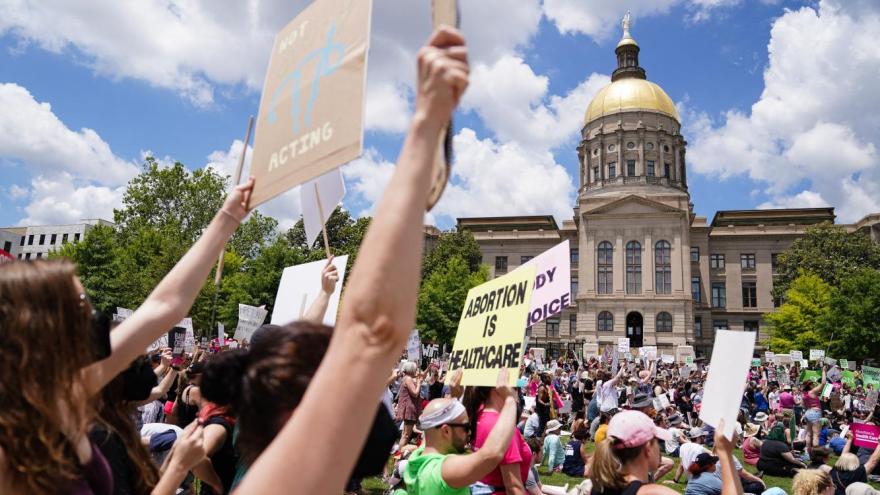 Georgia Supreme Court has reinstated the six-week abortion ban. Activists rally outside the State Capitol in support of abortion rights in Atlanta, on May 14.

(CNN) -- The Georgia Supreme Court reinstated Wednesday a six-week ban on abortion in the state.

The brief, one-page order says the emergency petition filed to put a hold on a lower court ruling overturning the ban has been granted.

"The State of Georgia's Emergency Petition for Supersedeas seeking a stay of the order of the Superior Court of Fulton County in the above-styled action is hereby granted," the order reads.

Georgia's LIFE Act bans, with some exceptions, abortion when early cardiac activity is detected -- which can be as early as six weeks into a pregnancy, when many women don't yet know they are pregnant.

A lower court ruling last week had put the abortion ban on hold, calling it "unconstitutional." In his opinion, Fulton County Superior Court Judge Robert McBurney wrote that when the LIFE Act was passed by Georgia lawmakers and signed by Republican Gov. Brian Kemp in the spring of 2019, "the supreme law of this land unequivocally was -- and had been for nearly half a century -- that laws unduly restricting abortion before viability were unconstitutional."

The state attorney general had appealed that ruling to the Georgia Supreme Court.

The Supreme Court of Georgia order said seven of the justices agreed on the decision, one justice was disqualified and one did not participate.