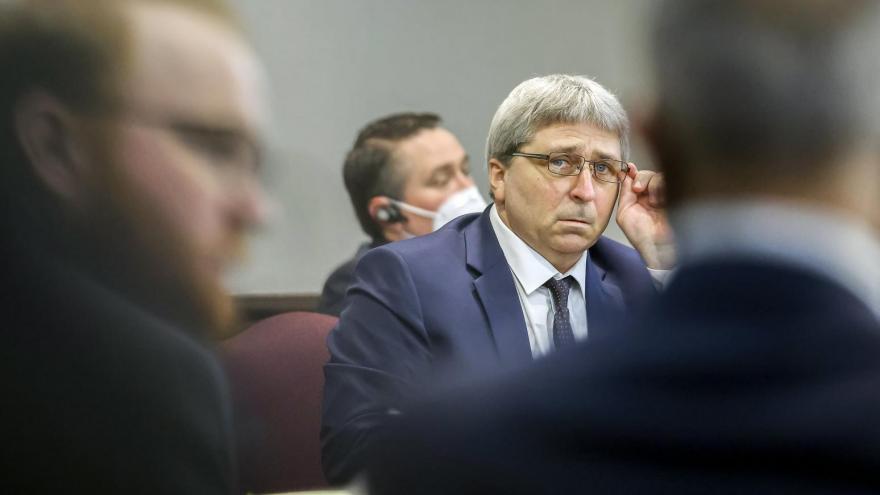 Ahmaud Arbery's killers face sentencing today, but the sprawling legal saga is far from over

(CNN) -- Three White men who chased and murdered 25-year-old Black jogger Ahmaud Arbery in south Georgia were sentenced to life in prison Friday, with two having no chance of parole.

Travis McMichael, 35, his father, Gregory McMichael, 66, and neighbor William "Roddie" Bryan were convicted in November on a raft of charges, including felony murder, for Arbery's death.

Before handing down the sentence, Walmsley held a minute of silence, saying it "represents a fraction of the time Ahmaud Arbery was running" through the neighborhood outside Brunswick before he was killed on February 23, 2020.

He described the killing as a "chilling, truly disturbing scene," telling the court, "When I thought about this, I thought from a lot of different angles. And I kept coming back to the terror that must have been in the mind of the young man running through Satilla Shores."

Arbery's mother and father cried as the sentences were handed down, according to a pool reporter present. Gregory McMichael leaned back in his chair and appeared visibly shaken, the reporter added, after his son was sentenced.

"I made a promise to you the day I laid you to rest," she said, speaking directly to her late son. "I told you I love you, and someday, somehow, I would get you justice."

"Son, I love you as much today as I did the day you were born. Raising you was the honor of my life, and I'm very proud of you."

The judge imposed additional prison time for each of the defendants for other felony charges. For the McMichaels, that additional time will be served concurrent to each other but consecutive to the life sentence, Walmsley ruled. As a result, both face total sentences of life without parole plus 20 years.

Sentencing, Walmsley said, "does not generally provide closure," though that may be what Arbery's family and the community are seeking.

"Instead of closure, maybe it would be best to see today's proceeding as an exercise in accountability," the judge said. "We are all accountable for our own actions. Today demonstrates that everybody is accountable to the rule of law. Taking the law into your own hands is a dangerous endeavor."

At a news conference after the sentencing, Arbery's mother was asked how important was it for her to respond to comments from Gregory McMichael's defense attorney Laura Hogue, who called Arbery's toenails long and dirty in her closing arguments.

Cooper-Jones responded saying, "The long toenails that she brought up in her closing argument, she failed to mention that Ahmaud was laying there in the middle of the road with a big hole in his chest. She left that part out," she said. "I didn't want to mention that today, but I wanted to reiterate that Ahmaud was bigger, he was bigger than that."

The sprawling legal saga isn't over: The men's attorneys say they'll appeal the verdicts; a federal hate crime trial is slated for next month; Arbery's mother has filed a civil lawsuit; and the original prosecutor faces charges over her alleged handling of the case.

Defense attorneys argued for leniency on behalf of their clients, who told police after the shooting that they chased Arbery because they believed he had committed a crime in their neighborhood.

The defendants, their attorneys argued Friday, were upstanding members of their communities who had made mistakes, but whose actions did not deserve among the harshest possible sentences.

Travis McMichael is a "devoted father," said his attorney Robert Rubin, and a "hard worker," who thought he was doing the right thing for his community at the time of Arbery's killing.

Hogue similarly asked for life with parole for her client, arguing he was a good man and Arbery's death was an unintended consequence of his actions.

"If life without parole is a sentence that is held for only the worst of the worst, it simply can't be a sentence for a person who never intended that tragic result that took place on February 23, (2020)," she said.

Attorney Kevin Gough distinguished Bryan, his client, from the McMichaels. Bryan did not know what was happening when he joined the pursuit of Arbery, Gough argued, nor did he have a weapon with him. And after Arbery was dead, he cooperated with law enforcement, Gough said.

"I think it is readily clear that while Mr. Bryan has disputed and continues to dispute whether things that he did that day constituted crimes, he has never questioned the tragedy of this death," Gough said.

The McMichaels were armed as they gave chase that afternoon in February 2020, and Bryan later joined the pursuit, recording it from his pickup. Bryan's video shows Travis McMichael exit his truck and confront Arbery, who tussles with Travis over a shotgun before the younger McMichael fatally shoots him.

The McMichaels claimed they were conducting a citizen's arrest and acting in self-defense. Bryan said he took no part in the killing. Authorities made no immediate arrests. The men were so confident in their defense, they had Bryan's video released to the public in May 2020, according to criminal defense attorney Alan Tucker.

It helped spell their undoing. The 36-second video sparked outrage that soon dovetailed with outcries over the killings of George Floyd in Minneapolis, Rayshard Brooks in Atlanta and Breonna Taylor in Louisville, Kentucky.

At trial, prosecutor Linda Dunikoski ripped holes in the self-defense and citizen's arrest claims, emphasizing Travis McMichael acknowledged never seeing Arbery armed and never hearing Arbery threaten anyone. She pointed out inconsistencies between his testimony and what he initially told investigators, spurring him to testify he was "mixed up" and traumatized when police arrived.

Dunikoski pointedly questioned how Arbery could be an aggressor when he was unarmed on foot and repeatedly tried to elude three men, two of them armed, in trucks.

Judge Walmsley said Friday that Arbery was "hunted down and shot" by a group of individuals who had taken the law into their own hands.

"Remorse I think can be determined by looking at somebody's reaction to difficult circumstances and the reality of the situation that they're in ... Remorse is something that's felt and demonstrated," the judge said. "In this case, getting back to the video, again, after Ahmaud Arbery fell, the McMichaels turned their backs ... and they walked away."

"This was a killing -- it was callous," he said, "and it occurred, as far as the court is concerned, based upon the evidence, because confrontation was being sought."

A jury of nine White women, two White men and one Black man heard from 23 witnesses over eight days. During 11 hours of deliberation, jurors asked to see two clips of the video.

Following the verdicts, Travis McMichael's attorneys said their client is "sorry for what happened to Ahmaud Arbery," and they plan to appeal. One of the father's attorneys, Laura Hogue, was "floored" by the verdict and intends to appeal, she said. Bryan's attorney, Kevin Gough, said he feels "appellate courts will reverse this conviction."

Race was a steady factor, and not solely because of the defendants' and Arbery's skin tones. Walmsley expressed concern about the jury's makeup, and Gough and Hogue were accused of making insensitive remarks, with the latter accused of dehumanizing Arbery by raising his "long, dirty toenails" during closing arguments.

During her victim impact statement on Friday, Arbery's mother brought up her son's toenails in an overt nod to Hogue's comment.

"He was messy. He sometimes refused to wear socks or take good care of his good clothing. I wish he would have cut and cleaned his toenails before he went out for that jog that day," Cooper-Jones said during her statement.

"I guess he would have if he knew he would be murdered."

During jury selection, Gough complained of a dearth of older White men without college degrees. Glynn County is 69% White and 27% Black.

Race could be a component of the appeals process, as Gough repeatedly called for mistrials because prominent Black pastors accompanied the family in the courtroom and attended a "Prayer Wall" outside the courthouse during trial.

Dunikoski alleged Gough's complaints about Black pastors in the courtroom led to the Prayer Wall.

"That is good lawyering right there because now he's motioned for a mistrial based on something that he caused," she said. Later, Dunikoski added Gough "intentionally and strategically, I believe, did what he did in an effort to attempt to insert potentially some error into the case in case he lost the case and it went up on appeal."

Many more court dates to come

The defendants have maintained their innocence on federal hate crime charges, including interference with rights and attempted kidnapping. The McMichaels were also charged with using, carrying and brandishing a firearm during and in relation to a crime of violence; and Travis McMichael was charged with discharging a firearm.

Federal prosecutors say the defendants "used force and threats of force to intimidate and interfere with Arbery's right to use a public street because of his race."

"We are deeply disappointed that the Justice Department bought the false narrative that the media and state prosecutors have promulgated," Travis McMichael's defense team said.

The federal trial is scheduled for February 7, one month after the men's sentencing. Because they've remained at Glynn County Detention Center since their arrest, there's been no federal bond hearing. If convicted on the weapons charges or interference with rights counts, they face additional penalties of up to life in prison with possible six-figure fines.

Federal prosecutors asked Arbery's mother if she would consider a plea deal for the men who killed her son, her attorney told CNN Friday. She declined.

Arbery's mom has also filed a civil lawsuit targeting the men and police and prosecutorial officials. Among the officials is former District Attorney Jackie Johnson, who lost her November 2020 reelection bid after a decade overseeing the five-county circuit.

Following Arbery's shooting, Gregory McMichael called Johnson, for whom he worked as an investigator until 2019, saying he needed advice. Glynn County police officers who responded to the scene also reached out to Johnson for advice. No one was arrested for two and a half months.

Johnson was indicted in September on counts of violating her oath of office and hindering law enforcement. She's accused of directing officers not to arrest Travis McMichael, "contrary to the laws of said State" and "showing favor and affection to Greg McMichael during the investigation," according to the indictment. She recused herself from the case the day after the killing, citing her connection to Gregory McMichael.

CNN's attempts to reach Johnson have been unsuccessful. She denied any wrongdoing in an October 2020 debate during her reelection campaign, saying, "It is a tragedy for the family. I'm sorry how things happened. I'm sorry that a lie got started and I could not turn it back."