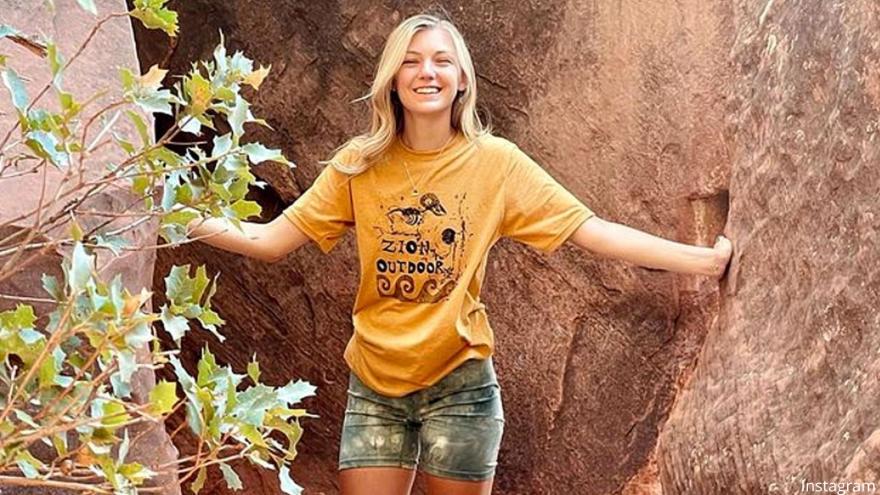 (CNN) -- The family of Gabby Petito has submitted a $50 million claim against the Moab, Utah, Police Department, arguing the 22-year-old may not have been killed last year by her fiancé if officers had recognized he was the "true primary aggressor" in a domestic dispute about two weeks before her death.

Petito's parents are seeking $50 million in damages, claiming Moab officers were negligent in failing to investigate Laundrie, 23, and his "self-evidently false claims" and the department was negligent in failing to train officers to investigate domestic violence incidents, according to their notice of claim sent to the department Monday, the first step in initiating a lawsuit against it.

Additionally, Petito's family claims her killing was caused by the wrongful acts or neglect of the police department and its officers.

Moab officers "failed to recognize the serious danger (Petito) was in and failed to investigate fully and properly," Brian Stewart, an attorney for the family said Monday in a news conference, referencing the moment Moab police stopped Petito and Laundrie after a witness said he saw them involved in a domestic incident.

"They did not have the training that they needed to recognize the clear signs that were evident that morning: that Gabby was a victim and that she was in serious need of immediate help," Stewart said.

Petito, an aspiring travel influencer, vanished last summer on a cross-country road trip with Laundrie. As a nationwide search ensued, attention also turned to Laundrie, who returned home to Florida and vanished in a nature reserve.

Days into the search for Laundrie, Petito's body was found in Grand Teton National Forest, and a coroner ruled she died by strangulation. Laundrie's body was found in mid-October in the nature reserve, along with a notebook in which he claimed responsibility for her death. A medical examiner determined he died of a self-inflicted gunshot wound.

The notice of claim against Moab police comes months after Petito's mother and father, along with their respective spouses, sued Laundrie's family, alleging his parents knew their son had killed Petito and were aware of "the whereabouts of her body."

At the heart of Petito's family's claim is the traffic stop last August, which officers executed after being informed the witness "had seen Brian assault Gabby."

Police pulled over their vehicle -- a white Ford van -- after it exceeded the speed limit, abruptly left its lane and struck a curb, according to a police report.

Footage recorded by police body cameras shows Moab police officers talking to Petito and Laundrie, who admitted to having a fight in which Petito said she struck her fiancé first. Officers noticed Petito had cuts on her face and arm, and she "demonstrated how Brian had violently grabbed her face during their altercation," telling police Laundrie "gets frustrated with me a lot."

According to the family's claim, a photo taken at the time, which has not been made public, "shows a close-up view of Gabby's face where blood is smeared on her cheek and left eye, revealing the violent nature of Brian's attack."

Laundrie told police the couple had been under increasing stress. He admitted to pushing Petito away when she tried to slap him and also to taking her phone, claiming he didn't have one and was afraid that she would leave him. However, later in the interview, he took out his own phone and gave officers his number, the notice says.

Despite the cuts and Laundrie's inconsistencies, one of the officers said Petito must be booked into jail since, under the domestic violence statutes of Utah, she was considered the primary aggressor and Laundrie the victim.

Both Petito and Laundrie objected, and the officers eventually agreed not to charge Petito as long as she and Laundrie agreed to spend the night apart.

A review of the Moab Police Department's handling of the incident by an independent investigator -- a captain with the police department in Price, Utah, about 115 miles away -- recommended the two officers who responded be placed on probation, saying they made "several unintentional mistakes" -- namely failing to cite anyone for domestic violence, though there appeared to be only sufficient evidence to charge Petito.

The investigative report, released in January, recommended new policies for the department, including additional domestic violence training and legal training for officers.

The city at the time did not address any potential discipline for the two officers but said it "intends to implement the report's recommendations" on new policies for the police department, including additional domestic violence training and legal training for officers.

"Based on the report's findings, the City of Moab believes our officers showed kindness, respect and empathy in their handling of this incident," the city's statement said.

Petito's parents and stepparents did not comment on the litigation during Monday's virtual news conference at the direction of their lawyers. But her mother acknowledged the footage of the Moab incident was "very painful."

"I wanted to jump through the screen, rescue her," Nicole Schmidt said, encouraging victims of domestic violence to reach out for help.

Asked what the family wants the public to remember from Petito's story, her father Joseph Petito, said people should learn there's always a way out.

"Her legacy is to help people that don't see a way out, and there are," he said.