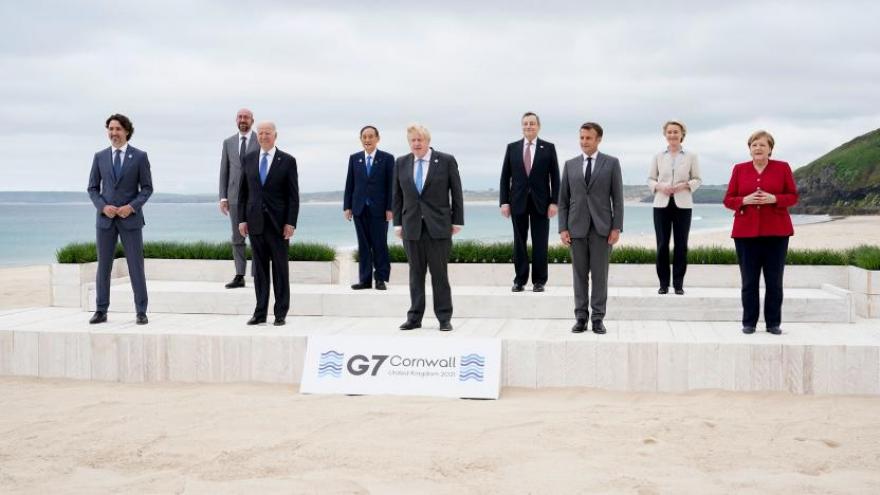 World leaders attending the Group of Seven summit issued a call for a new study into the origins of Covid-19, including in China, after an initial report was deemed lacking because Beijing had refused to cooperate.

(CNN) -- World leaders attending the Group of Seven summit on Sunday issued a call for a new study into the origins of Covid-19, including in China, after an initial report was deemed lacking because Beijing had refused to cooperate.

They agreed to speak out against human rights abuses in China, a matter that had been hotly debated behind closed doors over the course of the three-day summit.

"I think we're in a contest with China ... in a contest with autocratic governments around the world, as whether or not democracies can compete with them in a rapidly changing 21st century," US President Joe Biden said at a news conference following the summit. "And I think how we act and whether we pull together as democracies is going to determine whether our grandkids look back 15 years from now and say, 'Did they step up? Are democracies as relevant, as powerful, as they have been?'"

"And I walked away from the meeting with all my colleagues believing they are convinced ... they believe that to be the case. And so I think you're going to see just straightforward dealing with China."

The leaders, in the G7 summit communiqué, also singled out Russia as harboring networks that have conducted ransomware attacks wreaking havoc on critical systems, saying countries must do more to address criminal activity within their borders.

The G7 leaders outlined steps to end the coronavirus pandemic and preparing for future pandemics. The leaders have collectively pledged to donate more than 2 billion Covid-19 doses.

Climate was also a big focus of the summit, and the communiqué states the G7 leaders committed to net zero emissions by no later than 2050.

The leaders adopted the Biden administration's "Build back better" slogan in the communiqué, writing, "We will develop a new partnership to build back better for the world, through a step change in our approach to investment for infrastructure, including through an initiative for clean and green growth."

Sunday's announcements came after the leaders from the G7 countries -- the United States, Canada, United Kingdom, Germany, Italy, France and Japan -- met in southwestern England for their annual summit to discuss pressing issues on the global stage and coordinate policy.

"What we as the G7 need to do is to demonstrate the benefits of democracy and freedom and human rights to the rest of the world. We can achieve that through medical history. We can do that by working together to stop the devastation that coronavirus has produced from ever occurring again," he added.

American officials characterized the communiqué's China language in particular as a coup for Biden, who entered the summit hoping to convince fellow leaders to take a tougher line. He has made the competition between democracies and autocracies a central theme of his first foreign trip, and wants leaders of other democratic countries to more vocally speak out against authoritarian regimes.

He met resistance from some European leaders, who do not share his view of China as an existential threat. It was unclear leading up to the final session whether language specifically calling out forced labor practices or human rights abuses would be included in the final statement.

Ultimately, the final communiqué that was released on Sunday expressed "concern" about state-sponsored forced labor, particularly in agricultural, solar and garment sectors. It said China must respect human rights in Xinjiang, allow a high degree of autonomy in Hong Kong and work to avoid a security deterioration in the South China Sea.

It also called on leaders to consult one another to find ways to counter abusive economic practices.

"This has been an unusually substantive and productive G7," a White House official said.

The summit's concluding statement came after an intense debate on the language that had stretched overnight. US administration officials had said on Saturday that while Biden and other leaders got along well, the China issue posed an area of disagreement.

In particular, German Chancellor Angela Merkel, Italian Prime Minister Mario Draghi and leaders from the European Union had appeared reluctant to include lines in the final document that might be viewed as a provocation to China, according to senior administration officials.

Biden was backed in his views by Johnson and, to a degree, by French President Emmanuel Macron, who has adopted a harder line on China as he faces reelection next year.

The United States and its allies have been stepping up pressure on China against Beijing's alleged repression of Uyghurs, a predominantly Muslim ethnic minority, in the country's western region of Xinjiang.

The US State Department estimates up to 2 million Uyghurs and other Muslim minorities have passed through a sprawling network of detention centers across Xinjiang. Former detainees allege they were subjected to intense political indoctrination, forced labor, torture and sexual abuse in these detention centers.

Sunday's announcement about a new study on the origins of Covid-19 came weeks after Biden said he had directed the US intelligence community to redouble their efforts in investigating the origins of the pandemic and report to him in 90 days.

Biden's announcement came after a US intelligence report found several researchers at China's Wuhan Institute of Virology had fallen ill in November 2019 and had to be hospitalized -- a new detail that fueled fresh public pressure on Biden to delve deeper into the origin of the virus.

"China has to start to act more responsibly in terms of international norms on human rights, and transparency," Biden said. "Transparency matters across the board. And I think the idea that, for example, one of the things I raised --and others raised, I wasn't the only one who raised this piece of it -- is that we don't know."

"We haven't had access to the laboratories to determine whether or not -- I've not reached a conclusion because our intelligence community is not certain whether or not this was a consequence of a -- from the marketplace, of bat interfacing with animals in the environment that caused this Covid-19, or whether it was an experiment gone awry in laboratory."

The G7 leaders also pledged to increase and coordinate global vaccine manufacturing capacity on all continents, improve early warning systems and shorten the cycle for development of safe and effective vaccines, treatments and tests from 300 days to 100 days.