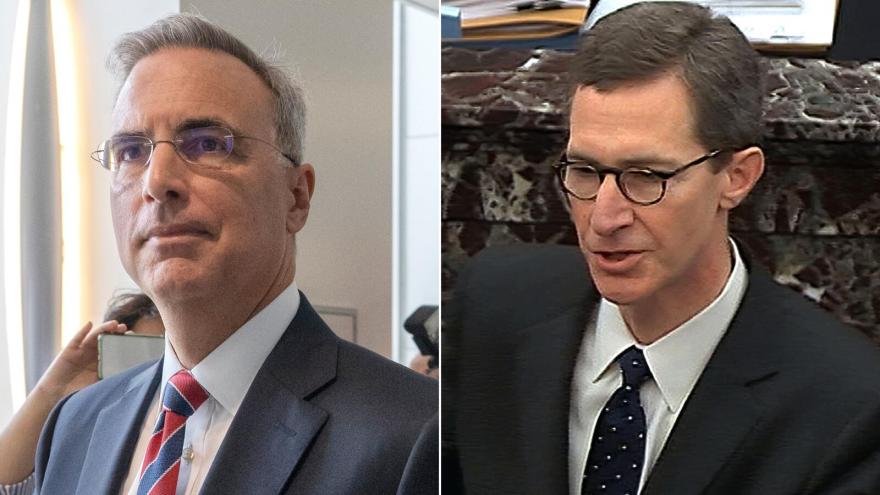 Former White House counsel Pat Cipollone, left, and his former deputy Patrick Philbin are expected to appear on September 2 before a grand jury in Washington, DC, that's investigating the January 6, 2021, attack on the US Capitol.

(CNN) -- Former White House counsel Pat Cipollone and his former deputy Patrick Philbin are expected to appear Friday before a grand jury in Washington, DC, that's investigating the January 6, 2021, attack on the US Capitol and the events leading up to it, a person familiar with the matter tells CNN.

CNN previously reported that Cipollone and Philbin had been subpoenaed in the federal criminal probe. Philbin and Cipollone, who worked in the White House counsel's office, were both key witnesses to then-President Donald Trump's actions in the last days of his presidency.

Cipollone and Philbin repeatedly pushed back on efforts to overturn the 2020 election and opposed a proposal to replace the attorney general with someone willing to look into false claims of election fraud. Both Philbin and Cipollone indicated that they would resign should such a plan be executed.

Philbin has already testified about the Capitol attack in a separate probe -- he appeared earlier this year before the House select committee investigating January 6, CNN previously reported.

During Cipollone's own testimony before the House committee, he told investigators that on January 6 he was joined by a number of top Trump advisers -- including Philbin -- in pushing the former President to issue a strong condemnation of the attack.

The criminal probe being conducted by the FBI into the Capitol attack is the biggest investigation in the bureau's history, with the Justice Department having arrested more than 840 individuals, charging roughly 255 with assaulting, resisting or impeding officers that day -- 90 of whom are charged with using a weapon or causing serious injury to an officer, CNN reported earlier this summer.

Roughly 185 Capitol rioters have been sentenced so far, with more than 80 receiving jail time.

Earlier this year, the Justice Department expanded its investigation beyond the rioters who breached the Capitol into fundraising and organizing for the political rally that served as a prelude to the riot as well as into efforts to subvert the Electoral College vote count.

As CNN reported last month, the FBI also interviewed both lawyers earlier this year as part of the investigation into federal records taken to Trump's Florida home, according to two people briefed on the matter. Cipollone and Philbin were designated by Trump shortly before he left office to deal with the issues related to his presidential records.

This story has been updated with additional details Thursday.