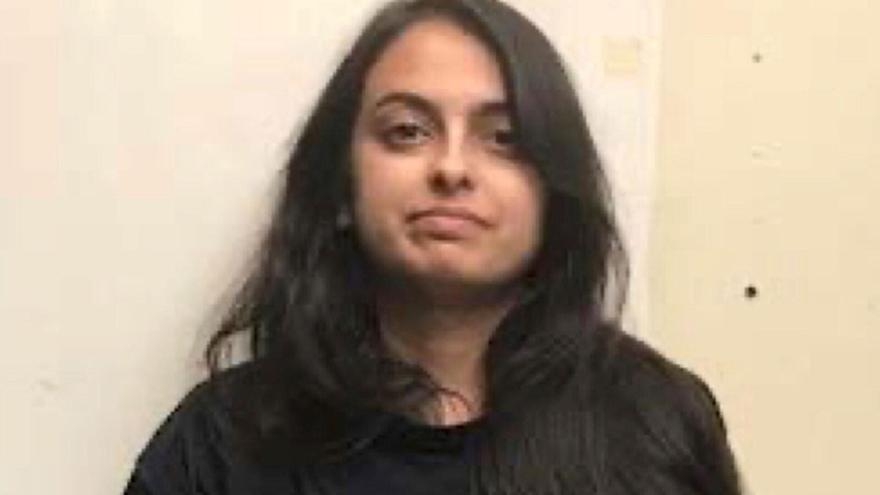 A US District Judge has sentenced a former lawyer to 15 months in prison after she made a Molotov cocktail and threw it at an empty New York Police Department vehicle . Urooj Rahman is seen here following her arrest in New York in May 2020.

(CNN) -- A US District Judge has sentenced a former lawyer to 15 months in prison after she made a Molotov cocktail and threw it at an empty New York Police Department vehicle during an anti-Brooklyn police brutality protest in 2020.

Urooj Rahman, 34, was sentenced on Friday by Judge Brian Cogan after pleading guilty to one charge related to the incident in October 2021, according to John Marzulli, spokesman for the District Attorney's Office for the Eastern District of New York.

Mattis, who also pleaded guilty, will be sentenced in December.

Both Rahman and Mattis had taken part in protests in Brooklyn in in May 2020 days after the killing of George Floyd, federal prosecutors said. The death of Floyd, an unarmed and handcuffed Black man who was killed while in Minneapolis police custody, sparked demonstrations nationwide over police use of force.

The incident triggered nights of protests and violence in cities across the country, with demonstrators voicing their anger in chants, on placards, and occasionally outbreaks of violence.

At the Brooklyn protest, Rahman approached an empty NYPD vehicle with an already broken window and tossed in a makeshift explosive device, according to court filings. A witness said she also "attempted to distribute Molotov cocktails to several other individuals and to incite them to use the Molotov cocktails in the course of the protests."

Rahman fled the scene in a van driven by Mattis, court records show. Police stopped the vehicle and found "precursor" items to build explosives, including a lighter, a Bud Light bottle filled with toilet paper and a gasoline tank.

The case of Rahman and Mattis has drawn attention not only because of the severity of the allegations, but also due to the characteristics of the two defendants.

The pair of former lawyers both attended top-tier schools -- Rahman is a graduate of Fordham Law School and Mattis completed New York University Law School after graduating from Princeton University -- and have backgrounds that indicate they are devoted members of their families and communities.

Rahman, a Pakistani immigrant, worked as an attorney at Bronx Legal Services, where she represented tenants facing evictions, and at the time of the protest lived with her elderly mother, for whom she cares.

Mattis, who is Black, was raised and at the time of the protest lived in East New York, where he was a member of his local community board and cared for three foster children, two of whom he was in the process of adopting.

Judge Cogan has set a surrender date of January 15 for Rahman.