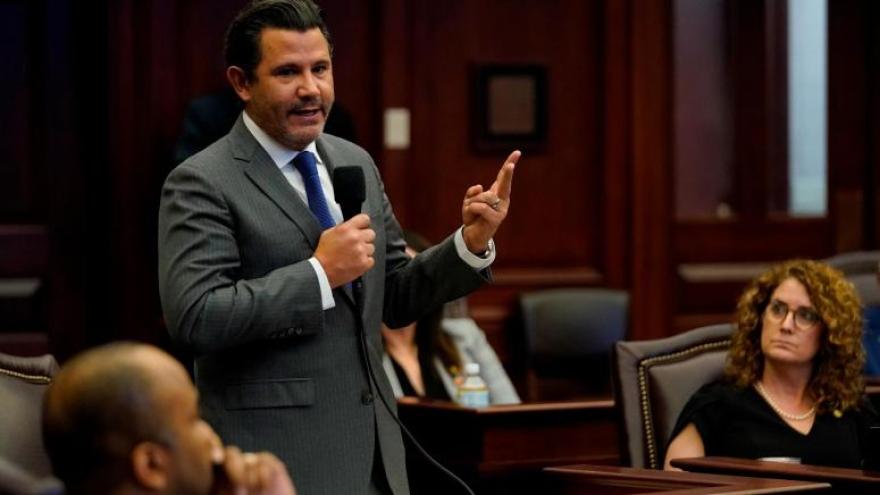 State Sen. Jason Pizzo, a Miami Democrat, contends that DeSantis illegally misspent taxpayer dollars by flying migrants from San Antonio to the Massachusetts island. Lawmakers this past year approved $12 million for a program to transport migrants but the state budget specified the money was to relocate "unauthorized aliens from this state."

On Wednesday, Pizzo told CNN, "If we are able to get this in front of a man or a woman in a black robe, how the hell is the state going to contend any of these people are from Florida?"

In response to the lawsuit, DeSantis spokeswoman Taryn Fenske told CNN Thursday, "Senator Pizzo never misses an opportunity for his 15 minutes of fame and is challenging an action on an appropriation he voted for."

DeSantis has vowed to transport more migrants from the border, telling reporters on Friday that the flights to Martha's Vineyard were "just the beginning."

The lawsuit was filed in the circuit court of the Second Judicial Circuit in Leon County, Florida. Florida Department of Transportation Secretary Jared Perdue, a DeSantis appointee, and the elected Chief Financial Officer Jimmy Patronis, a Republican, are also listed as defendants.

CNN reached out to Perdue and Patronis but did not receive immediate responses.

Patronis spokesman Frank Collins said in a tweet in part: "We are in receipt of the filing and we are currently exploring options for sanction and/or countersuit measures."

DeSantis last week took credit for two flights that moved about 48 migrants from the southern border to Martha's Vineyard in a headline-grabbing stunt that has thrust the country's immigration crisis to the front step of the wealthy vacation town. DeSantis said the action was paid for with the $12 million allocated this year by the legislature and he promised to use "every penny."

Asked repeatedly about the justification to move migrants located in a city 700 miles from the westernmost edge of Florida, DeSantis has said he is trying to stop the flow of migrants into Florida at the source. He has said the state has people in Texas "profiling" migrants who are likely headed to the Sunshine State, and they offered flights to Martha's Vineyard instead.

Pizzo, who is suing DeSantis as a citizen of the state, also alleges in the suit that the state did not follow other requirements to spend the money. The lawsuit claims that no program to transport migrants was ever created by Florida's Department of Transportation, nor did the department receive at least two quotes to hire a company to relocate people, another requirement of the law.

CNN has asked DeSantis' office and the Florida Department of Transportation for contracts and bid proposals related to the flights. Nothing has been provided to date.

Budget records reviewed by CNN show two payments made to Destin, Florida, based aviation company Vertol Systems under the migrant relocation program. The initial payment of $615,000 was made by the Florida Department of Transportation on September 8, six days before the Martha's Vineyard flight. Another payment for $950,000 followed on September 16.

In addition to flights, DeSantis also confirmed to Fox host Sean Hannity that migrants were put up in hotels and offered haircuts and other services before they were carried to Martha's Vineyard.

The planes touched down briefly in Crestview, Florida, a small city in the Panhandle.

Pizzo in the lawsuit alleged that the state also violated a new law championed by DeSantis that bans state agencies from contracting with companies that transport "unauthorized aliens." While there is a dispute as to whether the individuals picked up at the border constitute as "unauthorized aliens," Pizzo contended that by bringing these individuals into Florida, the state violated this new law.

If the DeSantis administration argues the migrants are not "unauthorized aliens," then it would be once again in violation of the parameters of the migrant relocation program, Pizzo told CNN.

"Were they transporting unauthorized aliens into the state? Because that's a no no," Pizzo said. "Oh, they're not, well then they were not eligible to be transported at all."

"If we're talking about 48 people from somewhere in Florida, and flown somewhere else, I would not raise the issue of feeding them, housing them and giving them haircuts," he added. "But FDOT, a road building agency, is spending money on food housing and other services outside of Florida on individuals with no nexus, no connection, no purview to the state. A fifth grader would understand why this isn't allowed."

The lawsuit requested an emergency case management conference and hearing and called for "expedited deadlines" to prevent future flights.